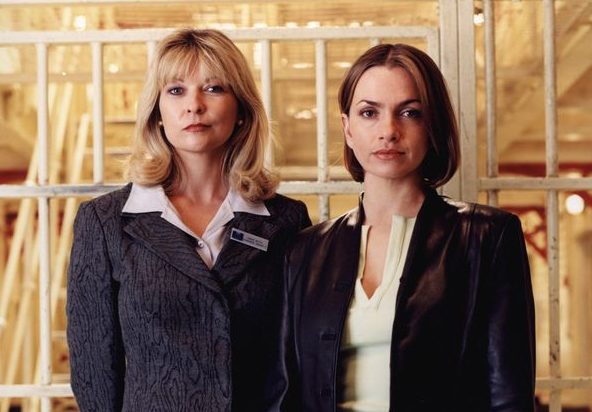 Fans of cult TV prison drama Bad Girls – and there are many – are in for a treat as the iconic programme is coming back to TV screens so set a series link post haste.

Drama Channel will be airing the show right from the beginning to the end, from Helen Stewart’s feelings for Nikki Wade right through to the death of Natalie Buxton and everything in between.

The show boasted huge names, including Emmerdale icon Claire King, who is back in the village as the devilish Kim Tate.

And she is excited to recall memories from the time on the show as well as the fans reliving all eight seasons.

The actress told Metro.co.uk: ‘I can’t believe it’s over 20 years since Bad Girls started and I joined in series 2 in 1999!

‘It was the camaraderie on set that was the best – we were stuck in a large aircraft hangar for eight months of the year with little daylight so we had to have a laugh!

‘A few times we would go to Oxford prison (which is now a hotel) for location scenes and it was like Bad Girls on tour! Everyone pulled together, there were no egos so it worked.’

And Claire is delighted – but not surpised – that there remains a huge following for the show.

She reflected: ‘Bad Girls has an incredibly strong fan base, stronger than I’ve known anywhere, they are so loyal to the show. I believe it’s because it came at the right time and was pretty hard hitting.

‘It dealt with issues we’d not really seen before and the characters were all so diverse – people could relate to them personally. Although set in a women’s prison with tough storylines there were a lot of comedy moments.’

C has been in the industry in some pivotal roles and, addressing the issue of roles for older women, she mused:  ‘I believe the industry has got better where women’s roles are concerned but there’s still ageism about which I don’t understand as age brings wisdom, maturity and knowledge  – you only have to look to other countries where the ‘elders’ are looked up to and respected.

‘Thankfully these days there are strong female writers, directors and producers who remove their blinkers and are able to educate the ignorant!’

Bad Girls will be shown on Drama channel weeknights from Monday 26th July 11.40pm, and on catch-up at UKTV Play