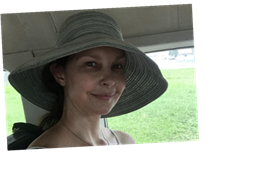 Actress and animal rights advocate Ashley Judd is recuperating at a South African trauma unit after almost losing a leg in a “catastrophic” fall in a Congo rainforest.

In an Instagram Live chat with New York Times columnist Nicholas Kristof – watch it below – Judd, speaking from her ICU bed, says she was walking in a Congo rainforest when she tripped over a fallen tree, shattering her leg. Judd, a frequent visitor to Congo, was doing work to track the Bonobos, an endangered great apes species.

Describing “an incredibly harrowing 55 hours” during which she was transported, in part by being hand-carried out, in part on a six-hour motorbike trip, from the remote rainforest location to a medical center in South Africa, Judd holds up the stick that she was biting to distract from the pain, “howling like a wild animal.” The actress, sister of Wynona Judd and daughter of Naomi Judd, recalls fading in and out of consciousness as she went into shock, repeatedly reciting “the Lord is my shepherd I shall not want” from Psalm 23.

Judd tells Kristof that despite the pain – “at the very edge of my edge” – and fear, she was fully aware of her “privilege” in having the opportunity to transfer to a fully equipped medical facility. Most Congolese people, she says, would have remained in the village, lost the leg and maybe a their life.

“The difference between a Congolese person and me is disaster insurance that allowed me 55 hours after my accident to get to an operating table in South Africa,” she says, adding that Congo villages lack not only electricity but “a simple pill to kill the pain when you’ve shattered a leg in four places and have nerve damage.”

Judd further explained on her own Instagram page, writing that she decided to speak out about the accident to spread the word about “what it means to be Congolese in extreme poverty with no access to health care, any medication for pain, any type of service, or choices.”

She continues, “Please join us and learn what it is like for much of the world – and how you can help. Bonobos matter. And so do the people in whose ancestral forest they range and the other 25,600,000 Congolese in need of humanitarian assistance.”