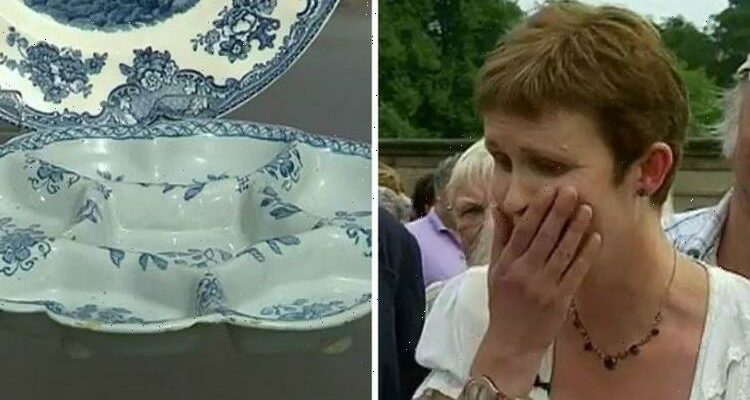 In the unforgettable episode from 2010 of BBC’s Antiques Roadshow, a guest was left stunned after expert Henry Sandon revealed the value of her 19th-century sweet dish. The guest revealed she had bought the dish and accompanying plates for less than £1 at a car boot sale, leaving Henry shocked at the revelation.

Visiting Chatsworth House in Derbyshire, Henry began looking at the array of dishes and said: “Do you like blue and white?”

The guest explained: “Yeah, I have been collecting blue and white transfer wear for quite a while now.”

After Henry noticed the first dish has a depiction of Chatsworth House on it, she explained: “That’s the newest one I’ve got.

“Yeah, just because of the interest of it being Chatsworth and the date says 1792 and that wing on here wasn’t actually built until the 1820s.”

Henry asked: “I see, so they fiddled things a little, so how do you know about Chatsworth then?”

“Because I’ve worked here for 25 years, I work in the gift shop,” the guest revealed to which Henry replied: “So that’s where you acquire these?

“It’s particularly interesting, seeing Chatsworth looking up at it there, but of course it is quite a modern plate, it says England on it, so it was made after 1891.

“Anything with England on it or country of origin isn’t going to be before 1890, but these two are older.”

Pointing at the third plate on display, Henry noticed a landscape design on it, to which the guest said: “I particularly liked this because it shows a little bit of the animal falling off the bridge on it.”

Henry revealed that the plates were made in the middle of the 19th century, around the 1860s, however, the fourth piece was much older than the dishes.

The guest explained: “I saw a lady was clearing out at a car boot sale, she’d been collecting blue and white, so I bought some things off her, and that was among it, and I think it was 50p.”

Astonished at the price she purchased them for, Henry revealed: “Well, these are a bit more than 50p.”

The guest explained that the first and second dish she purchased for £1 and the dish with the landscape a little more.

Henry moved on to valuating the pieces and explained: “Well, these are going to be just £1 still, even though it’s got Chatsworth in it.

“But this little chappy who was 50p is actually about 1760 in date, that English tin pottery there, little peg legs and it’s intended as I suppose a bonbon or sweet holder.

“But made either in Bristol or Liverpool and instead of being a couple of odd quid, your 50p is now worth £800.”

The guest held her hands up to her face in shock and exclaimed: “Oh, my goodness, even in that condition.”

At the end of the episode, the guest decided to keep her valuables despite the stunning evaluation of the dish.