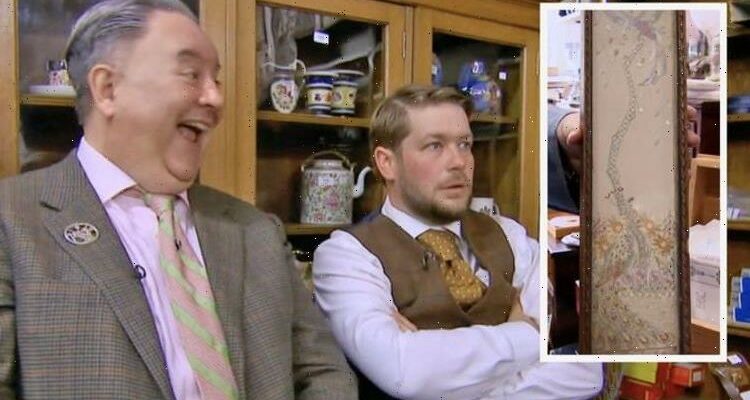 In a previous episode of Antiques Road Trip, experts Steven Moore and Angus Ashworth hit the shops in search of some bargain antiques. Steven found a piece of needlework art and while unsure about who the creator was, he knew the popularity for such items was on the rise and therefore, he purchased it for a measly £13. Before the auction began, Angus had a nosey at what items Steven have bought and when he noticed the needlework art, he wasn’t impressed. Those watching at home saw Angus brand the framed artwork as “cheap” but he was lost for words when it fetched over 10 times its original purchase price under the hammer.

Rummaging around an antique store, Steven said: “It’s always the most interesting things which are priceless and this is a really nice Scottish artist and embroidery panel.

“Annoyingly it’s clearly had a label there, that might have been the person who’s signed it.

“But, they’re getting more and more popular and people are believing that needlework is actually an art form rather than a craft.

“I don’t think it’s signed, but when you look, not even the colour of it, but look at the quality of the stitches – this is somebody who knows about arts and crafts.

“And these Scottish needlework panels can make money,” he continued.

“Even though the frame is probably the original frame, it doesn’t really do it justice. In a better frame, it would look much more important.

“This might be a bargain. Let’s see how much it’s going to be and maybe this is something I could take to the auction.”

Heading over the shop counter, Steven said to the owner: “I found this over the back, no price, so how much are we asking for it?”

“I’m asking £15 for it,” Stuart stated and Steven continued: “There’s also a little canton vase at the back. Do I buy that? Do I buy both? You’re going to say buy both.”

When Angus scouted out his competition at the auction, he picked up the frame and remarked: “That way up? No that way I think it’s meant to be.

“Hmm.. bit surprised with this and Steven, it’s not his best needlework, I mean, it’s quite well done but it’s faded, quite small, are people really putting this sort of thing on their wall anymore?

“For £13 he didn’t pay a lot for it, but then would you?” Angus wondered. “Of all of his items, this is the bit I’d least like to take home. Good luck Steven.”

As for how the item did when it went to auction, Angus turned to his co-star and said: “You seem to have bought a lot of cheap things on this one.

Steven explained: “Cheap can be good. If it’s worth a lot of money.”

“Where did that come from?” Steven wondered still stunned by the price his item sold for.

The Antiques Road Trip voice-over explained: “It may be a piece of May Morris needlework.”

“Told you it was good. I knew that was something,” Steven gloated.

Having bought the item for £13, Steven made a whopping profit.

Antiques Road Trip is available to watch on the BBC iPlayer now.