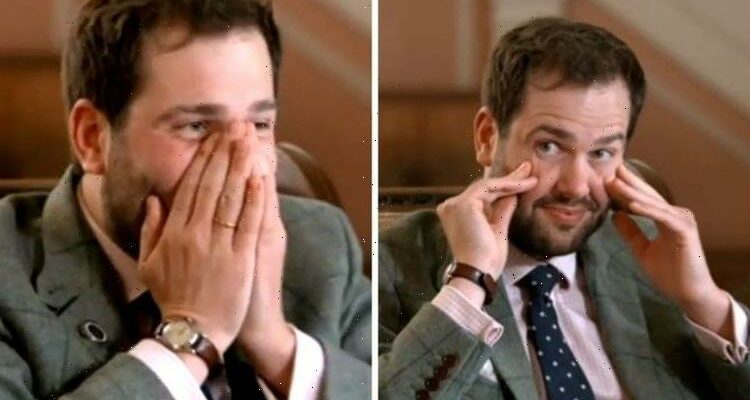 Tim Medhurst and Izzie Balmer travelled around Wales together to hunt for items to sell on Antiques Road Trip. Tim thought he was onto a winner when he discovered a selection of vintage railway maps from an antique shop to sell. However, the expert was left in total disbelief when they made a loss at auction.

After Tim and Izzie had purchased all of their items, they watched on as their antiques went under the hammer via a video link.

Tim explained: “My favourite [map] is a 1950s one and it’s of the Underground in London and it’s just quite cool.”

The vintage maps cost Tim £80 in a Welsh collectables shop, but the auctioneer had to start the bidding at £50.

He covered his face with his hands in disbelief that little interest was being shown in his collection of maps.

With no bidders, the auctioneer had no choice but to bring down the opening price of the maps to £35.

A shocked Izzie said: “I am really surprised because railway memorabilia is always a sure win.”

“I literally cannot believe that,” Izzie said after the maps sold for nearly half the price Tim paid.

Tim had high spirits early on in the episode when he discovered the vintage maps hanging on a wall inside a shop.

While climbing on top of a cupboard to inspect them he said: “They are really cool.”

He was informed the maps cost £20 each and made a deal with the shop owner to buy five of them for a total of £80.

Izzie also purchased maps to be sold at auction, but unlike Tim’s maps, hers were a lot smaller.

Ahead of Izzie’s maps going under the hammer, Tim said: “Now I bought big maps and you bought small maps didn’t you?”

Izzie joked: “It’s not all about size Timothy.”

However, Izzie’s maps which cost her £30 sold in the auction for just £20.

“I’m not laughing because you lost money,” Tim explained to Izzie following her £10 loss.

“No of course you’re not, you’re Mr Supportive,” she sarcastically replied.

Antiques Road Trip airs on BBC One on weekdays at 4.30pm.