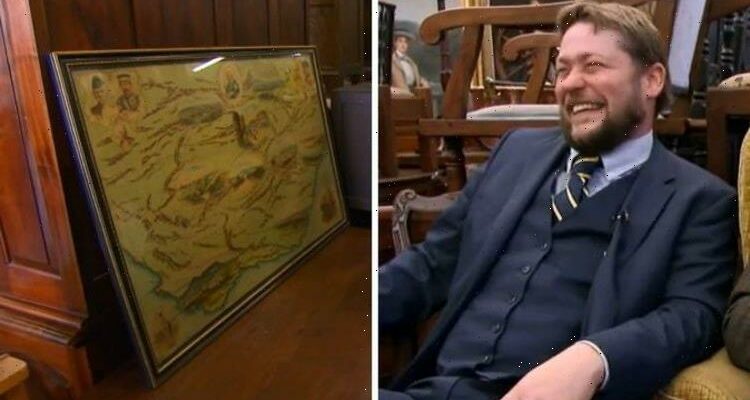 Antiques Road Trip experts Angus Ashworth and Steven Moore were hunting treasure in Derbyshire and Yorkshire in an episode of the BBC show which aired earlier this year. The pair were on the hunt for antique treasures they thought would turn a profit when it went to auction. During one of their stops, Angus found a 1900s Boer War picture he thought was a winner, but did he excel when it came to auction?

“Ah, finally some military interest for me. Here we go!” Angus exclaimed when he first found the item.

“This big coloured print here, and this relates to the Boer War. The Boer War was fought in South Africa between the British and the Boers which were sort of Dutch origin, over the control of South Africa.

“They’ve got this lovely, illustrated map of the time. It’s decorative, it’s a little bit different. There are a few holes and things on it, but it’s lovely.

“I’ve been there, I’ve done all the battlefield tours. I’ve been to Pretoria, so it’s quite a reminiscent piece for me.

“No price on it, but… I have to buy a bit of military on this trip, don’t I, so that’s a very strong possibility.”

After finding the Boer War picture, a North American Canoe, and a jug with a fish on it, Angus found dealer Billy to talk about prices.

Working out the best deal for himself, Angus asked: “Can we call it a straight hundred?”

Extending a handout to Angus, Billy cut the deal and the expert walked out with three items to take to the auction.

The Boer War picture was the last item of Angus’ to be up for auction. Co-star Steven turned to Angus and asked: “What am I losing money on next, or is it you?”

Angus replied: “It’s me, and to be fair, it’s the item that I’m least confident about.”

The auctioneer started off the auction at a £20 bid with it getting a lot of attention and climbing in price at a quick rate.

Impressed with how fast the price was rising, Steven turned to Angus and exclaimed: “I see what your tactics are, sir. ‘Oh, it’s not going to sell.’ ‘No one wants it.’ Kerching!”

“Well you know military is my main area, and I knew this would do well,” Angus hit back.

Angus was thoroughly impressed with his find, explaining: “I mean, military is where the hits at. I was very confident about this coming in…”

“You knew what this was didn’t you?” Steven once again turning to Angus in disbelief.

“400 would be nice wouldn’t it” Angus joked and to his surprise, the auctioneer then called: “£400 online!”

Both Steven and Angus turned to each other in shock with the expert fist-pumping the air at his success.

The picture eventually sold for £420 meaning Angus made a profit of £390.

Both Angus and Steven were delighted with the end results with the former making a huge profit at the end of the day.

Angus started the day with less than £200 and after costs, he made a huge profit and find himself in the lead with £596.72.