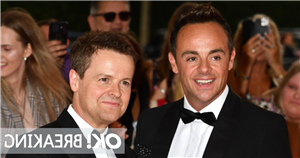 Ant McPartlin and Declan Donnelly won the Best Presenter gong for the 21st year in the row at Thursday's 2022 National Television Awards at London's O2.

The Geordie duo, aged 46 and 47 and were absent from the event due to testing positive for Covid, beat out the likes of Alison Hammond, Bradley Walsh and Graham Norton — who were all nominated.

It comes after Ant & Dec broke a World Record in 2019 for winning the most Best Presenter gongs ever at the NTAs.

Accepting the award for them was their close friend and co-host Stephen Mulhern.

Earlier on Thursday, Ant and Dec revealed they wouldn't be able to attend the NTAs as they have both contracted Covid-19.

The humorous pair posted images of their positive Covid tests to their Instagram (which they also share) saying: "Sadly, it's true… we even get ill together!" They added: "After feeling unwell a few days ago we both tested and we're positive for Covid…

"We're resting up at home and are so sorry we can't be at the @officialntas… Best of luck everyone… and get well soon to anyone else in the same boat x."

Amanda posted a glimpse of the set for the magical evening, which included an old fashioned clock with clouds projected on to a screen on the stage.

A spokesperson for BGT confirmed that Ant and Dec weren't able to film the show, saying: "Ant and Dec are both unwell and have postponed all work commitments until they recover.

"Sadly, this means they were unable to film Britain’s Got Talent: The Ultimate Magician. Whilst we wish them a speedy recovery, we are thrilled to confirm that BGT’s favourite magician, Stephen Mulhern has stepped in."

The BGT special was filmed in front of a live studio audience on Tuesday (October 11) and will see 10 acts compete for the prize.

Loose Women's Nadia Sawalha also missed the NTAs on Thursday due to Covid. Seen bedridden in a YouTube clip, Nadia held up her NTAs ticket as she regretfully said: "Look what I just got delivered on a bike. It's very fancy. National Television Awards.

"There it all is. Guess who won't be going to the National Television Awards…", as she frowned to the camera.

Nadia revealed she had planned what she was going to wear, before having to pull out of the awards show, adding: "I've got such a lovely dress — I've got three lovely dresses I can choose from.

"My friend Simone was coming over to do my make-up, I'm supposed to be going with my friend Jordan in the car.”

Despite missing the show, the host assured fans that her fellow panellists Jane Moore, Kaye Adams and the rest of the Loose Women ladies would be attending the event, representing the show for her.