When it came to the new dark comedy series “Flack,” Anna Paquin said that as a producer, she was attracted to the quality of creator Oliver Lansley’s writing — but it was the character that ensured her involvement both behind and in front of the camera. “It just happened to be a character that I’m like ‘yeah, I’m not giving that to someone else,’” she said. “If I was not right for that character it would still be something I would want to produce. It’s just — a 30-something hot mess/rockstar professional, with all the dark, all the drama, all the funny, all the beautiful writing? Yeah, no, I want that, please and thank you.”

In “Flack,” the Oscar-winning actress stars as Robin, a troubled personal publicist with a knack for cleaning up the messes made by her celebrity clients. The concept first came to Paquin and husband Stephen Moyer’s production company CASM Films a few years ago, and “we had a few attempts at getting it set up. Life got hectic, it didn’t quit end up happening at the time,” she said.

However, Paquin and her partners decided to go back and revisit the idea a little over a year ago. “We’re like, we always loved it — the writing was amazing. It was dark, it was smart, it was funny, it was ballsy,” she said. “So we got back in touch and a few months later we were shooting.” 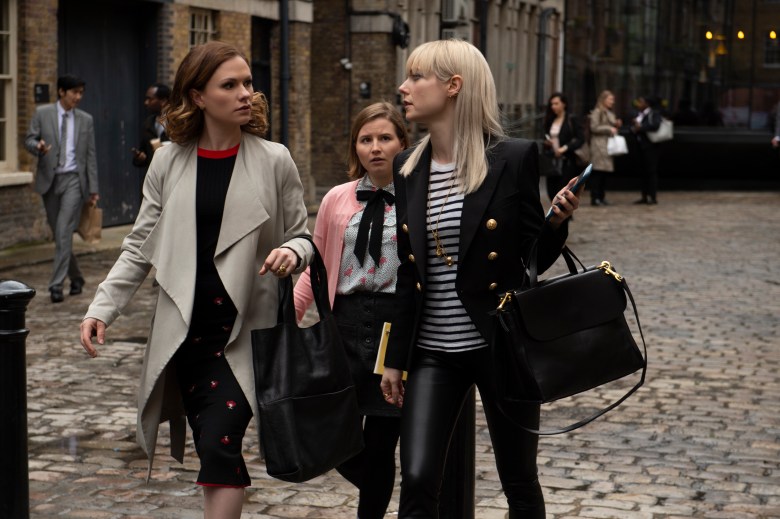 Beyond the setting, “Flack” gets a British flair from a guest cast full of British TV favorites, including Alan Davies, Marc Warren, and Max Beesley, as well as Lansley’s writing. “There is just certain kinds of things about English humor that don’t really translate to people with American accents, and living in America, saying them,” she said. “There is a different way of verbally expressing one’s self, which I thoroughly enjoy.”

But for Paquin, the location doesn’t really matter in the long run: “I just think the world of media and press is completely international at this point in entertainment. There is no such thing as local press. Everything goes on the internet and its around the globe in a split second. Where people are from per se, is less…relevant.”

Robin and her colleagues use deeply underhanded methods to help their clients get through shady situations, and Paquin acknowledged that it’s a world she’s no stranger to. “I’ve been working with PR reps since I was a very small child,” she said. “There are moments where there’s funny overlaps. But that would not be the kinds of things that I’m going to share with the entire world.”

At the time of our conversation, Paquin was working on the final season of Showtime’s “The Affair” after joining the cast as the adult version of a pivotal character. While she couldn’t say much about the experience, she did say that “it’s really exciting joining a show that you’re a fan of already, that’s been up and running already and is this really well-oiled machine. And [showrunner] Sarah Treem is my new creative crush. I’m having an amazing time.”

It was a marked contrast to “Flack,” because “it’s exciting creating your own thing from scratch, but it’s also terrifying. In all the best possible ways. But it’s also nice being a guest on somebody else’s very, very beautifully well-established show, that is excellent.” As a producer, Paquin’s projects include the indie film “The Parting Glass,” directed by Moyer and currently doing the festival circuit. One of the perks of producing, she said, is working with people she and Moyer have pre-established relationships with.

“We like good material, we like talented people, we like inspiring people, we like people who are — it might sound really obvious, but — kind and nice to work with. Life is too short, you know. That’s part of why we wanted to start doing our own things,” she said. “We have loads of friends who are incredibly talented and people that we’ve worked with that you’re like, oh, I’d like to work with you again, and then you don’t see that person for 10 years. But if you’re producing your own content you can call people and be like hey, what are you doing?”

In terms of where her taste lies, Paquin pointed to “Flack’s” particular brand of black comedy as an example. “I like funny, but this is my version of funny,” she said. “Not like mainstream funny. Like really dark ‘am I allowed to laugh at this, because that’s so messed up?’ funny.”

Paquin noted that “Flack” was conceived as a limited series, and thus there’s no guarantee of a second season. However, she’s been no stranger to TV projects for some time, and doesn’t see that changing in the future. “I wouldn’t say there aren’t interesting film roles for women, because obviously there are. There’re loads of wonderful roles, but I think with all the sort of new platforms and streaming things and different networks that are popping up… People are willing to take a risk on something that maybe 10 years ago wouldn’t be considered a sure thing.”

“I think I’m probably not the only lady in my business who’s enjoying that.”