Anna Duggar is still pushing the sale of earbuds on Instagram.

She is joining her sisters-in-law in an attempt to be social media influencers. Several of the Duggar daughters have tried their hands at it, mostly with the same companies over and over again.

Will Anna Duggar branch out?

As of now, Anna Duggar has only posted about earbuds for sale at a discounted rate. She hasn’t done much promotion for other things like the other women in the family.

Nothing from the clothing partners has been shared — yet. Anna is likely working to see how much of a response her following can garner. She has 962,000 followers at the time of writing this, which are decent numbers, especially when it comes to scoring promotional partnerships.

Counting On fans have been bugging Anna Duggar to share some braiding tutorials on the braids she does for Mackynzie and Meredith Duggar. They have been begging for weeks, and still haven’t gotten a response from the former reality star. Monetizing a few videos on YouTube could be good for the mom of six. 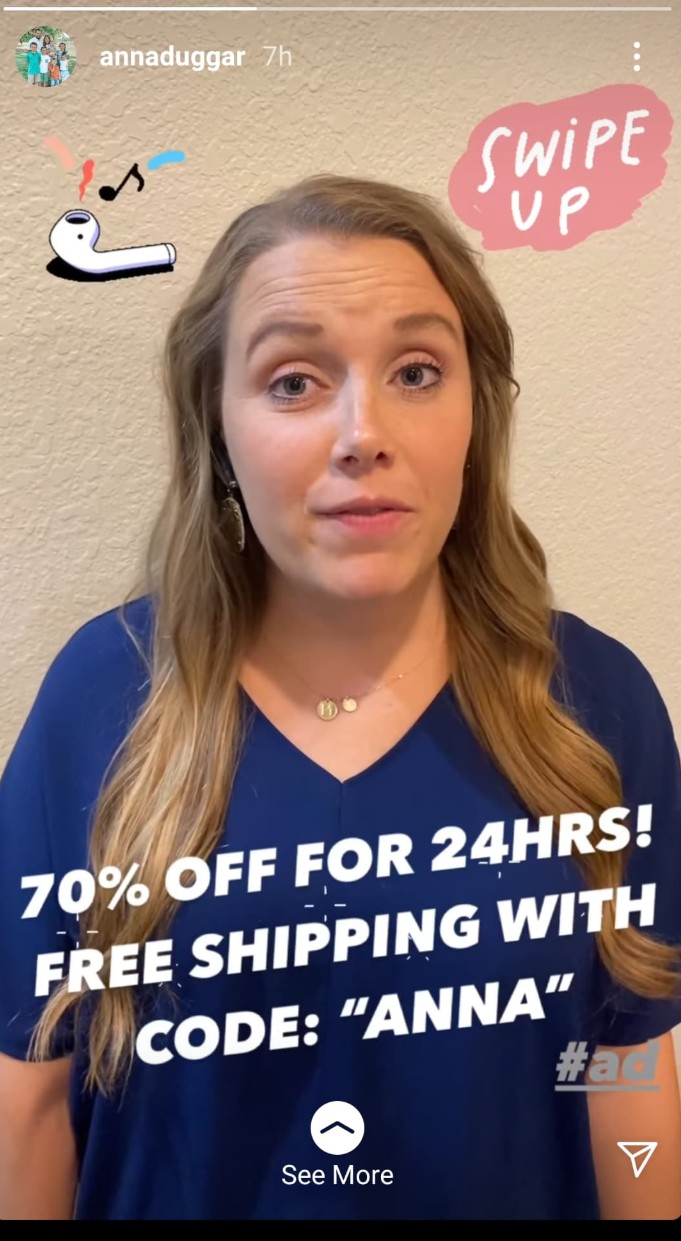 Will Anna Duggar ever return to reality television?

On occasion, Anna Duggar and her children still appear on Counting On. They were a huge part of the 19 Kids and Counting show before it was canceled in 2015. Since then, the Duggars have branched out without Josh Duggar and Anna, which has changed their lives significantly.

The TLC network will no longer allow Josh to be a part of the shows, which is why Anna is only shown sparingly. If she and the children are participating in a family event, that is fine. During Season 11, she was shown quite often as the holidays were approaching and several new babies were born into the family.

At this point, an active YouTube channel may be the only hope of seeing Anna and her family sharing their lives again. She is fairly active on Instagram, mostly to show off how much the kids are growing. Occasionally, there will be a photo of herself or Josh too.

Without much else happening, Anna Duggar looks to be going down the path of social media influencer. She has sisters-in-law who do it often, but there have also been some lost partnerships along the way too. For now, it looks like earbuds are her go-to product.

Counting On is currently on hiatus.