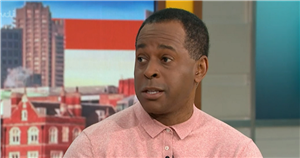 Good Morning Britain’s Andi Peters left viewers gobsmacked after the competition presenter announced that he would be leaving the breakfast show next month.

During Tuesday’s visit to the ITV studios, Susanna Reid and Ed Balls introduced the TV presenter onto the show as the trio welcomed viewers back to the breakfast show.

One of the biggest stories on everybody's lips this week was the final announcement of the star-studded line-up for I’m a Celebrity … Get Me Out of Here! as Vick Hope shared the official list of camp mates joining the reality show this week.

But what viewers weren't expecting to hear was that one of the presenters on the ITV show would be ditching the cold and grisly London weather for the gorgeous golden weather Down Under.

On the show, the 52-year-old broadcaster confirmed he would be jetting off to Australia in December for exclusive access to the I’m a Celebrity … Get Me Out of Here! Jungle.

The TV star will be covering the hugely popular reality show throughout the series but for the final week of the nail-biting show, the former Dancing on Ice star will be flying out to the infamous campsite.

It is understood he will be covering the final seven days of the show just a stones throw away from Ant and Dec's infamous treehouse where he will report live on the latest news going on inside the camp.

Not only that, the TV hunk will also be there to film the moment the nation celebrates the well-deserving celebrity be crowned the next King or Queen of the jungle.