And just like that… the Sex and the City revival said goodbye to one close friend and one husband.

HBO Max’s And Just Like That… brought back Carrie, Miranda and Charlotte from the original hit comedy, but we learned in Thursday’s premiere — read our full recap here — that their former pal Samantha (played by Kim Cattrall) had moved to London and stopped returning their calls. That wasn’t the only loss, either: The first episode ended with Carrie’s husband Mr. Big suffering a post-Peloton heart attack and dying, sending Carrie into a deep spiral of grief.

TVLine chatted with And Just Like That… showrunner and Sex and the City veteran Michael Patrick King, who wrote the revival’s first two episodes, to get answers on these two huge plot twists. Read on to see if there’s any hope for Samantha to return in the flesh — and to see if a newly widowed Carrie could possibly reenter the New York dating scene.

TVLINE | The loss of Samantha Jones is a big one. Did you consider other options for the character, even killing her off, possibly?
Never. I love Samantha. She’s a beloved character. I loved everything she added to Sex and the City. It wouldn’t have been the same without her. No one could play that. And also, I have a great respect for the fans and their feelings about Samantha, as a person who ran a show with her and movies with her, with Kim playing Samantha. I had no interest in killing Samantha. I thought that would be unnecessary.

Friendships fall apart. When I came up with the idea that friendships fall apart, that’s part of life, we always try to reflect life, and we talked about it in the writers’ room. A couple of us in the writers’ room lost very dear friends that reflected exactly the line that Carrie says: “I thought the four of us would be friends forever.” I think a lot of people have relationships that they’re surprised didn’t go the distance, and every time that happens, we noted in the writers’ room, it was usually when you tried to cross personal and professional, and that’s what happened here, story-wise. So you said the “loss” of Samantha Jones… she’s in London. She seems to be living a pretty lovely life.

TVLINE | Yes, and we do hear from her in Episode 2, sending the flowers to Big’s funeral as a way of offering her condolences. Is she going to be a presence throughout the season?
Nothing that’s something that you could be waiting for. I mean, it’s something that will or won’t happen, depending on the story we’re trying to tell. But it’s not a critical part of the story. It’s an interesting color to add every now and then. 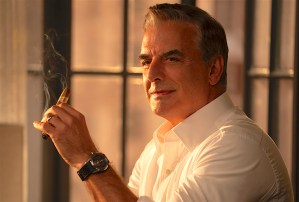 TVLINE | Killing off Mr. Big was a pretty huge swing, storytelling-wise. Did you hesitate at all about pulling the trigger on that, since it was such a shock?
No, I did not hesitate at all. Sex and the City has always been bold in its story choices. This just happens to be one about one of the main love interests of the show. When we did this show on HBO, we did many things that were dark and confusing and surprising. Carrie had an affair. She ruined a marriage. Samantha had cancer. Miranda almost had an abortion. This show has always been a combination of dark and light. Over the years, people have sort of remembered it because of syndication that it’s about cocktails and funny date stories. But even the date stories were graphic, on the original show. So I was never daunted about the idea of doing it, because I knew that I had such a significant actress to play this. I had Sarah Jessica [Parker], who could play this character, and people love Carrie.

Death is part of life. And the fact of the matter is, this is fiction. And one of the great things to use fiction for is to make us feel things that aren’t real, that are scary, because in real life, when you feel them, it’s just devastating. But in fiction when you feel them, it’s not real. But you get to have a trial run. Everybody’s lost somebody, and why can’t Carrie? And the fact of the matter is, it proves that it’s not television. Because television’s rule is: Don’t change anything that’s working. Well, they were really working. That’s why we went for it, because I wanted to sort of have the show reflect a new reality. And also, it’s interesting to discover: Is it better to have loved and lost than never to have loved at all? It’s something I think about all the time. And I think it’s interesting that Carrie has to now figure that out.

TVLINE | So what does this mean for Carrie going forward this season? And could we see her dating again? Or is that just way too soon for that?
We’re trying to reflect and honor what would happen to somebody who is deeply happy and in love with someone when they died. So we have our eye very much on the timeframe when things are happening, what the journey is. I have no interest as a writer, none of the writers do, to bring Carrie into a dark, dark forest and leave her there. Or the audience, by the way. I have no interest in taking the audience into a dark forest and saying, “You’re on your own. Good luck.” No, there’s a lantern. We’re gonna get out. You get light and dark. Because I’ve never had one day in my life that’s all funny, and I’ve never had one day that’s all tragic. So life should reflect that. I mean, we’re grownups now. It’s 2022. Life should reflect the lives of 55-year-old characters.

Drop your thoughts on the And Just Like That… premiere — because we know you have some — in the comments below.