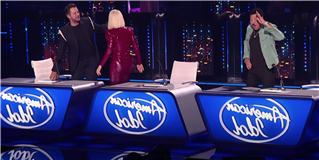 As American Idol nears the end of its current season, the heartbreak over each eliminated contestant is getting more and more intense.

The ABC competition show ended on a tough note Sunday night for fans of 16-year-old finalist Casey Bishop, who was forced to pack her bags after the nationwide vote. Now, only Willie Spence, Chayce Beckham and Grace Kinstler remain, and one will be crowned the 2021 American Idol next Sunday night.

The results came as a major shock to many fans who thought Casey’s debut of her single “Love Me, Leave Me” and her rendition of Mötley Crüe’s “Live Wire” (she sang the same song in her audition) were enough to secure her a spot in the top 3. But sadly, they were wrong.

Given how close Casey was to making the season finale, it makes sense that some folks are disappointed. But heartbreak aside, there were many who made it clear that this elimination was the final straw for them. “Welp. No need for me to watch the#AmericanIdol finale. How in the WORLD did Casey get cut??? Now I remember why I stopped watching. #ridiculous,” a fan complained.”#AmericanIdol there is no way I believe Casey was voted off. So disappointed, you know what you did . Lost me as a fan,” a different fan wrote. “BIGGEST IDOL SHOCK EVER! My mouth hit the floor when her name was not called. She was the best singer on there,” someone else declared.

Needless to say, the judges were also sad to see Casey go — especially Luke Bryan, who predicted in Casey’s audition that she would be the next winner of the show. After the results were in, the country singer wrote on Twitter, “You’re a true rockstar. This is just the beginning for you! Walk out of here with your head very high.”

As for Willie, Grace and Chayce, the three are just one show away from finding out who will be crowned the next champion. Right now, it’s anyone’s game, though some outlets are predicting Chayce to come out on top. The artist’s debut single “23” soared to the top of the iTunes country chart this week, making many believe he is the front-runner. But then again, many thought Casey would win, so you just never know!