For all kinds of terrible reasons, the movies don’t have that many great shots of black women. They just don’t. But there’s a shot of Aretha Franklin in “Amazing Grace” that might be the greatest image of a black woman that I’ve ever seen in an American movie. It’s just a medium close-up, straight on, of her at the podium of the New Temple Missionary Baptist Church in Watts, almost evenly framed between two microphones and a pair of Afros that complement hers. The camera doesn’t move. And neither does she, except to sing and even then: she’s moving you.

Half of what’s in the shot is some shade of white — her studded caftan, the wall behind her, the cluster of pearl-like berries dangling from her ears. Everything is white but Franklin, whose skin is brown (with some pastel eye shadow and glistening sweat) and whose voice is soothingly, staggeringly black. She’s up there to sing “What a Friend We Have in Jesus.” And the way she’s framed, all that brightness seems to fortify her glow.

That shot was composed in January 1972, for a movie that scarcely anybody had seen until last month. That’s when I saw it, and I was too overwrought and entertained to really know what its movie context would have been. So I went a second time and thought two things as I watched it. First: Why didn’t the people who made the film use that shot more? This thing has got dozens of Grade-A, laugh-out-loud, dry-your-eyes, stand-up-and-scream images. But none as divinely worthy of stained glass or the National Portrait Gallery.

Which leads me to the second thought: What if this movie, which begins a weeklong run Friday at Film Forum (it’s also showing in Los Angeles), had managed to make it to a movie theater in 1972, when Franklin was among the planet’s greatest current pop stars? Just about the only other black women you could find photographed with as much care would have been Diahann Carroll during her three seasons on “Julia” and Diana Ross playing Billie Holiday, as an open psychological wound, in “Lady Sings the Blues.”

[Read more about why this is a must-see movie.]

“Amazing Grace” is the two-day-concert recording of what remains Franklin’s (and live gospel music’s) best and biggest-selling album. What could this movie, with that mouthwatering image of Franklin up at the podium, have done for the movies? Maybe nothing. But when Warner Bros. hired Sydney Pollack, who was youngish, on the rise, and between hits, to film this event, “Cotton Comes to Harlem” and “Sweet Sweetback’s Baadasssss Song” had been fairly recent hits. And “Shaft” had just cooled off.

This is to say that a pioneering black entertainment movement had just gotten underway, a pivot away from the revolutionary respectability of Sidney Poitier toward grittier, rawer, more experimental genre stuff — toward alacrity, lunacy and verve. Those movies weren’t churchy in the way Franklin’s is. Their sex, violence, flagrance and occasional shabbiness would get them grouped together — lumped, I would say — as blaxploitation. (“Blacula,” “Blackenstein” and “Black Belt Jones” were on their way.)

The movie Pollack directed is conversant with blaxploitation. The shotmaking has the wild warmth of some of those movies — in the images of the audience and of the disciplined and precise Southern California Community Choir, which backed Franklin those two days and was obviously roused by the experience. That affection is in the cuts to the choir’s leader, the Rev. James Cleveland, who’s so rocked at some point that he buries his damp face in a towel that he later hurls in astonishment past Franklin toward a camera.

To watch “Amazing Grace” now is to wonder where in the pantheon it would have landed at the time, where it would have landed her. (There was apparently a plan to put the movie on a double bill with “Superfly.”) It’s been a moot question, though, not only because Franklin objected to its release but also because there was a technical difficulty: Pollack left the dang clappers at home, or somewhere, meaning the sound couldn’t sync with the images. So who knows whether the movie could even have come out later that year.

As it is, the work, led by the former music producer Alan Elliott, to assemble the version we have — to get the sound as close to perfectly synced as it now is — was herculean yet possibly incomplete. The performance of “Mary, Don’t You Weep” that’s in the documentary, for instance, doesn’t match the shattering drama of what’s on the album, which, to be fair, underwent a little remixing and re-recording in a studio. Still, the movie’s “Mary” might be as ecstatic but it also feels abridged. 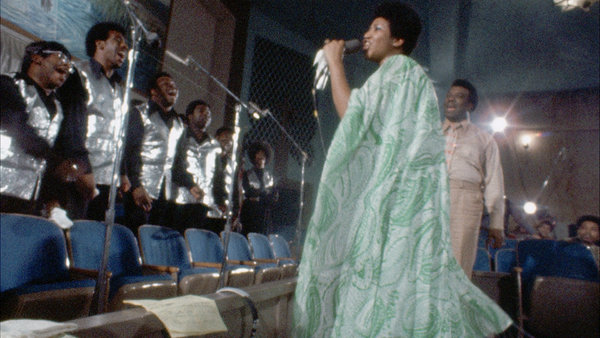 Nonetheless, from a distance, this is obviously one of the great music films, less epic in scope than, say, “The Last Waltz” but as glorious in communal feeling and South Los Angeles zeal as “Wattstax” (the natural partner for a double feature) and as musically imaginative as “Stop Making Sense.” What distinguishes “Amazing Grace,” what lifts it to the penthouse, is a mix of energy and moment.

Franklin did some of her best-ever singing in those two days, and with a lot on her mind and in her heart. One friend, the shapeshifting saxophonist King Curtis, had been murdered the year before; another, the Rev. Dr. Martin Luther King Jr., nearly four years earlier. Her gospel mentors and surrogate mothers, Mahalia Jackson and Clara Ward, were ill, and her father, the Rev. C.L. Franklin, was having all kinds of legal trouble. So there’s woe in her singing, and pain, but also ingenuity. There’s phrasing here that isn’t merely electric. It’s electrocuting.

The white cameramen orbit around all of these black folks, taking long drags on their expressions of involuntary disbelief at Franklin’s effect on them. The time the movie devotes to their shock — watching the profoundly impressed stank faces and the dabbed-at tears, bearing witness as Franklin’s outrageous excellence, on Night Two, causes breakdowns and crackups — bespeaks an interest in more than Franklin but in the emotional consequences of her incandescence. What guides the album is the spirit. What guides the filmmaking is a generosity of spirit, of — forgive me — respect.

This movie pays it far more fittingly and far faster than the fiasco of a funeral carried out in her name in August. It was a morning — well, a morning, afternoon and evening — of grandstanding, chaos and artistic inferiority, with bursts of grabbiness and oratorial incoherence. The movie is its opposite, its antidote. You get both the most lovely gaze a professional camera’s ever laid upon Aretha Franklin and some of the mightiest singing she’s ever laid on you. The woman practically eulogizes herself. Don’t bother with tissues. Bring a towel.