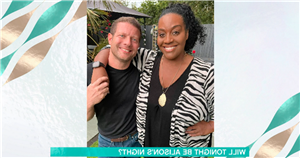 On today's This Morning hosts Phillip Schofield and Holly Willoughby were joined by Alison Hammond ahead of her "Best Presenter" nomination at tonight's National Television Awards.

But in the interview, Alison, 47, chose instead to heap praise onto her co-host Dermot O'Leary saying: "I just love him so much".

After viewers were treated to some of Alison’s funniest moments over her 20 years on the show, Alison confessed: “I’ve got that imposter syndrome. I’m seeing it from the outside thinking ‘is this really real?’.

She added: "I’ve been to that award’s ceremony so many times and I’m alright sitting in the background and letting other people taking the limelight.”

But it was co-host Dermot O’Leary who got all of Alison's praise as she said: “Dermot came to my house the other day and I just love him so much."

She added: "He is my partner in crime. I just think he’s amazing. He came down and I cooked him some chicken, rice and peas and he said it was the best dinner he’s ever had!"

Alison went on to tell a sweet story about Dermot accompanying her to the doctor's when her son was poorly saying: "I said to him ‘Aidan’s not very well so I’m just going to take him to the doctors, you chill out here’, and he was like, ‘No Al, I’m coming to the doctors with ya, I’m like his telly dad’!"

She added: "So we all went to the doctors all sitting in the waiting room – Dermot O’Leary from The X Factor is in the doctors with me – it was so so weird!”

She went on to describe her excitement about tonight's awards show saying: “Just to be nominated, I know everyone says it but it’s such a defining moment, I feel like I'm standing on the shoulders of giants in a way and you guys voted and pushed me through!"

She added: "It feels so weird – there’s Graham Norton, Bradley Walsh and our Geordie Duo who are just incredible and I’m sitting there with them! It’s just so bizarre and I’m just so grateful for this moment, I don’t care what else happens… we are going to have a great night tonight.”

When Phillip asked, “Have you quietly thought about what you might say?”

Alison laughed, “Yes, I’ve got a speech, seven pages babes! Ha! I’m only joking! I’ll just go with the moment. Obviously I would love to win, it would mean so much to me and my family. I’m just this girl from a council estate in Birmingham, I’ve worked really really hard, and I’m doing it for the everyday people that thought they weren’t good enough to be there, or couldn’t dream big enough so I want to do it for everyone else, so if I win, we all win man!”

Holly said, “You can do it!” And Alison admitted: “I feel like I’ve won already. It’s incredible. It’s a nice feeling to be seen and to be listened to.”

Then Holly referred to the surprise pulled on Alison in September to celebrate her milestone 20 years on the show saying: “And it would be extra special this year because it is your 20th year here which we all celebrated the other day.”

The National Television Awards is on tonight at 8pm on ITV and ITV Hub.