Good Morning Britain’s Adil Ray clashed with guest Quentin Letts over migrants who attempt to enter the UK after it was revealed deportation flights to Rwanda could be delayed by a year.

Thursday morning’s edition of GMB saw Adil return to the show alongside Kate Garraway, as they discussed some of the biggest headlines of the day.

One of the main ongoing stories of the week is the government’s next move over plans over the policy to deport those who enter the UK illegally to Rwanda.

The first planned deportation flight to Rwanda was cancelled after a last-minute intervention from the European Court of Human Rights. On the same day, more than 440 people were found trying to cross the English Channel to enter the UK.

As Priti Patel confirmed she was committed to making sure the policy was carried out, Adil addressed how the UK government should be treating migrants on today’s GMB.

However, he ended up clashing with guest Quentin Letts, a parliamentary sketch writer and journalist for The Times, over how to handle those who try to make the sometimes fatal journey across the English Channel. 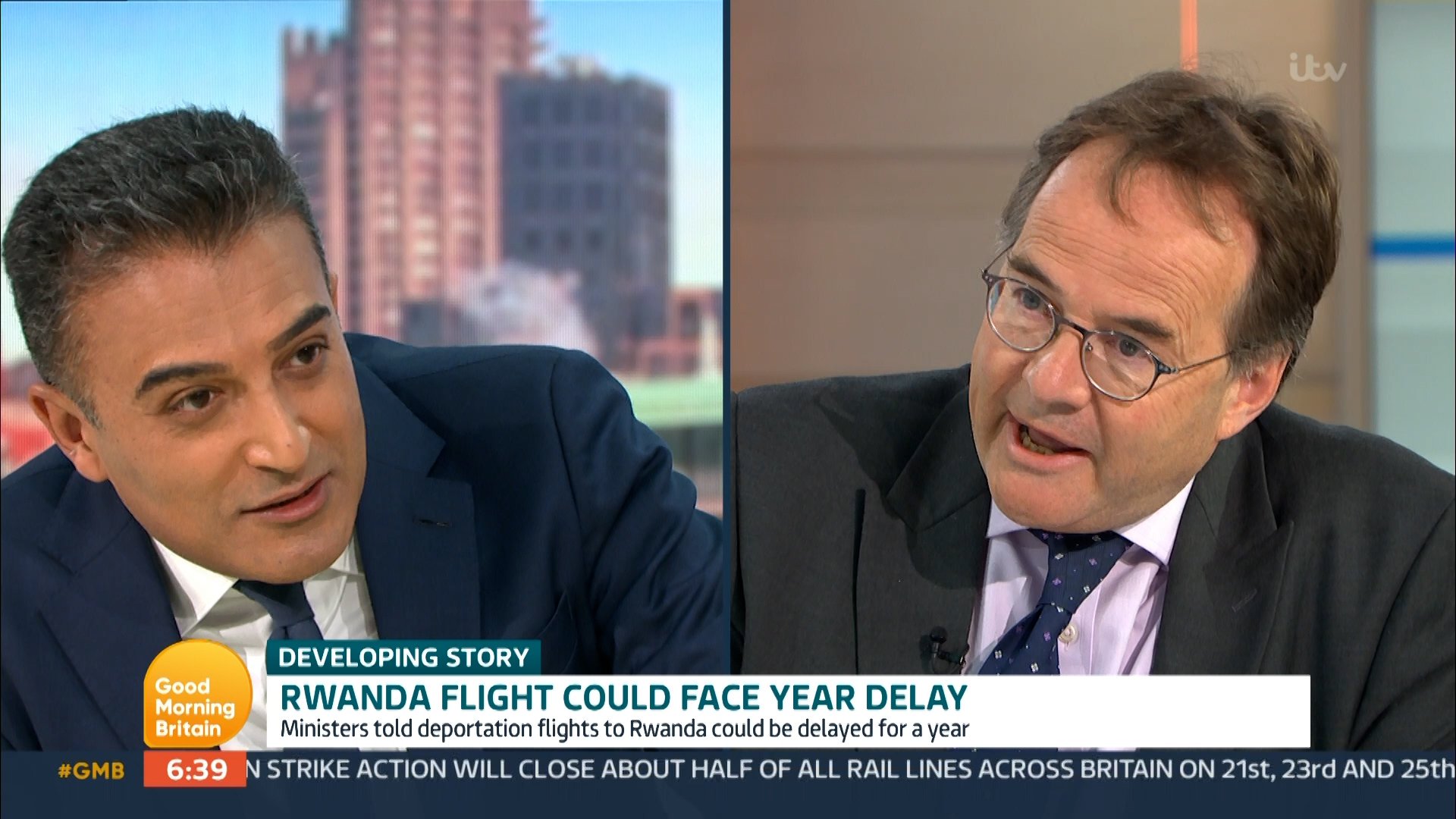 Adil quizzed Quentin on how the situation should be any ‘different’ to Ukrainians given the opportunity to seek refuge in the UK through legal methods online.

‘Because Ukrainians, as far as I know, aren’t washing up dead on the beaches of Dover,’ Quentin replied.

‘The Afghans do not have an online visa system. It’s different.’

Quentin told him that there are ‘procedures’ in place for those travelling from countries such as Afghanistan to come to the UK legally.

However, an increasingly frustrated Adil told him: ’It’s not the case, so why is there a difference?’

‘You ask me on this programme, you never let me actually answer a question. There are procedures, there are perfectly legal procedures for people to come in, but what the people using the boats are doing, they’re paying money to scoot around the rules,’ Quentin told him.

While the host pointed out again that there are ‘not legal routes’ like with those coming over from Ukraine, Quentin simply exclaimed: ‘I give up.’

‘It’s my job to correct you Quentin,’ Adil replied.

‘It’s not actually, you answer a question and then you don’t let me answer it,’ Quentin said.

As things continued to escalate between the pair, Quentin accused the rest of the panel of being ‘against him’ as no one appeared to agree with his viewpoint.

‘There’s no point talking to you because the four of you are against me, it’s just absolutely pointless,’ he claimed.

Kate waded in to calm things down, with viewers at home largely praising Adil’s probing.

‘Good question, Adil. Quentin would absolutely love to be free of European human rights’ restrictions. #gmb,’ one wrote on Twitter.

Another agreed: ‘Adil Ray is impressive today #GMB.  Keep up the good work.’

‘Quentin Letts is absolutely seething, will be suprised if he’s still there after the break,’ joked someone else.

A viewer said: ‘In his defence, he had no chance talking about that topic amicably this morning with Adil.  Especially when he talks s**t! 😂 #GMB.’