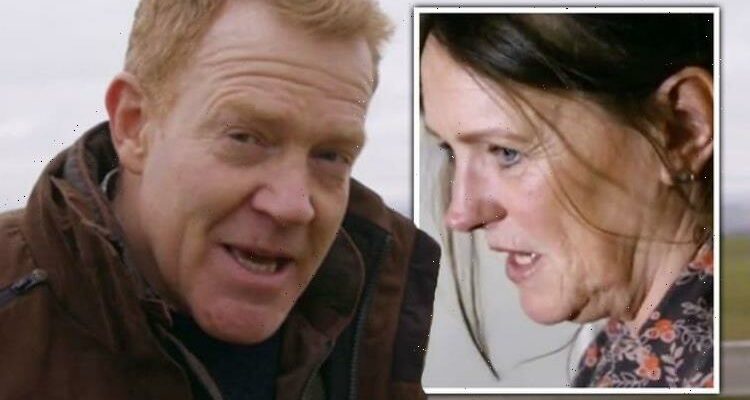 In the first instalment of Our Family Farm, Adam Henson visited Castlehill Farm in northwest England on the border of Lancashire. The Countryfile presenter was invited onto a 50-acre cattle farm owned by Ian and Karen Taylor. However, the Channel 5 host was left concerned when Karen’s daughter Gemma revealed her mum had suffered a painful injury.

The couple’s children Gemma and Ben were worried about their parents’ health.

They asked Adam to come along to help them make some dramatic changes to the farm to support their parents as their near retirement age.

Karen and Ian were passionate about maintaining their milk round that had been established two generations earlier.

However, midway through the programme, Gemma and Karen informed Adam of some bad news.

Gemma began: “Mother’s been getting herself in trouble she’s hurt herself severely on the milk round so she’s been in A&E most of this week.”

“Goodness me what happened,” the Channel 5 presenter remarked.

“I’ve had these bulging discs and then something happened last Thursday and I’ve been in agony. They recommended spinal surgery or pain management.”

“Karen’s injury has had a bittersweet consequence as she’s been forced to give up her milk round,” Adam noted.

She said: “I’m absolutely gutted by it Adam so I shall write some nice letters to my customers.”

“In a way, I’m not glad by any stretch but equally it forces us to make the decision,” Gemma said.

Adam remarked: “It’s so sad to hear the news, poor you, I certainly feel for you.”

“But the most important thing now is you get yourself fit and you look after yourself and you rest.”

Later, the family set about putting their ideas of turning the farm into a sustainable business into practice.

Gemma convinced her parents to convert one of their barns into a revenue stream.

She was looking to find a business that would provide income for the family while limiting her parents from carrying out manual labour.

Ian was reluctant at first but Adam helped the family to change his mind.

Karen, Ian, Gemma and Ben converted the building into an “Events Barn” which can be hired out to a variety of companies.

Our Family Farm Rescue with Adam Henson continues on Channel 5 tonight at 9pm.