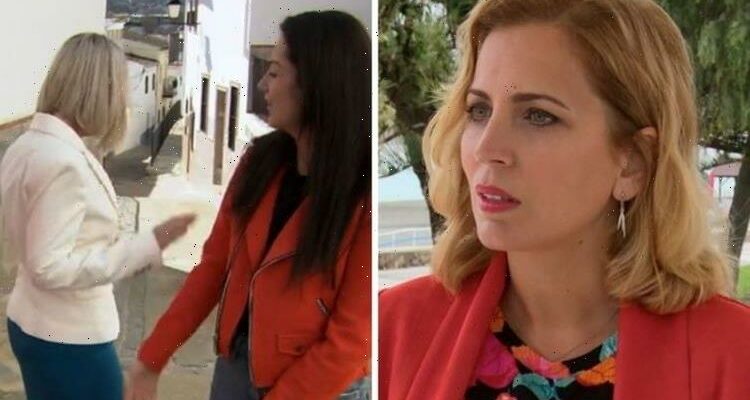 A Place in the Sun: Guest emotional over ‘surprise’ property

The Channel 4 property hunt show saw Alison from Scotland searching for the perfect holiday home in Spain with her daughter, Paula. Armed with a budget of £60,000, the mother and daughter were after a traditional Spanish home. Alison and her husband Ian had previously had a search of the area of Velez Malaga but he wasn’t able to join in the next search. But Jasmine Harman was able to track down a home Alison had fallen in love with before, which left the A Place in the Sun guest in tears.

After visiting two other properties, Jasmine was concerned the pair’s specific desires for the property would leave them with “few and far between” to look at.

The first home they saw had been too isolated for the two, and they couldn’t see themselves living there.

The second home was in a preferable area for Alison, but she and Paula both disliked the inside of the house, and said they were “disappointed.”

But Jasmine had an idea for the third option which she said she hoped Alison would be pleased with.

She took Alison and Paula to a home Alison had fallen in love with while searching with her husband Ian.

“We’re looking at this property,” Jasmine told Alison as they walked towards the home.

She added: “Which I believe may be familiar to you already.”

Alison replied: “Yes, I’m delighted that you’ve brought me back here,” before turning to her daughter and appearing lost for words.

Alison then turned back and wiped away tears as Paula said: “You’re getting emotional.”

The latter added she was looking forward to seeing the property, which was offered for around £67,000 but was negotiable.

While touring the inside of the house, Alison said it was “exactly” as she’d remembered.

Alison commented: “You might want to change the furniture but there’s nothing you need to do.”

Paula admitted she had a very good feeling about the option. The property was a three-bedroom townhouse in Villanueva del Trabuco.

It was located just 50 minutes from the city of Granada and consists of a bathroom, a lounge, a rustic style kitchen with patio access and a roof terrace.

While looking out at the stunning views from the balcony, Paula said: “I’m a bit speechless to be honest. It’s so nice.”

“It’s worth the money for that view alone,” added Alison.

The last property was a “quirky” two bathroom home on the market for just under £67,000.

Alison wasn’t expecting to like it as much as the third property but admitted she did.

“It’s almost like a sanctuary,” she said. “It’s beautiful.” After seeing the view from the balcony, Alison became emotional again and said: “What more could I ask for?”

Alison’s husband Ian was able to join the women when it came to making the decision, and they ended up putting in an offer of £62,500 for the fifth house. The owners then offered a price of £66,000 and said they’d include the hot tub Alison loved the look of and all the furniture.

The family agreed and the home was purchased.