Rita and Ravi have exactly one thing in common: tTheir traditional Indian families are eager to set them up with a suitable spouse, ASAP. Ravi (Karan Soni) is all-in on the idea, zipping through first date after first date, tracking his possible paramours with a meticulous spreadsheet, perpetually ready to float the idea that he wants three kids, and does his maybe-Mrs. want three too? Rita (Geraldine Viswanathan) is less amped on the idea, putting up with her mother’s demands because otherwise she’s likely to close the purse strings, leaving Rita out on her ass. Does she want three kids? Dude, Rita doesn’t know what she wants.

Conceived of and shot during the first months of the pandemic — first-time filmmaker Roshan Sethi is also, get this, a physician, and he spent the earliest months of lockdown working in a COVID ward — “7 Days” holds the familiar shape of other COVID-influenced creations and classic rom-coms, and its warmth and charm make it a darling entry in both categories. When we first meet Rita and Ravi (Soni also co-wrote the film with Sethi, his real-life partner), it’s March 2020 and things are about to go majorly topside. Lockdown hasn’t yet started, but the mismatched duo are already playing it safe; their first date is set at a mostly empty reservoir (damn global warming), with both parties sitting a respectful six feet from each other, masks on. The date is fine enough, and Soni and Viswanathan have a snappy chemistry, a sort of slow-burn Harry and Sally thing, but they’re both relieved when it’s over.

Wait, did we mention that lockdown hasn’t yet started? Because by the end of their date, it has, that’s how quickly things move. Trapped in Rita’s out-of-the-way, hilariously decorated apartment — she likes being alone, OK? — and unable to secure a hotel or a train or a rental car for days and days, Rita and Ravi’s first date suddenly turns into an extended affair. You can guess what happens next. 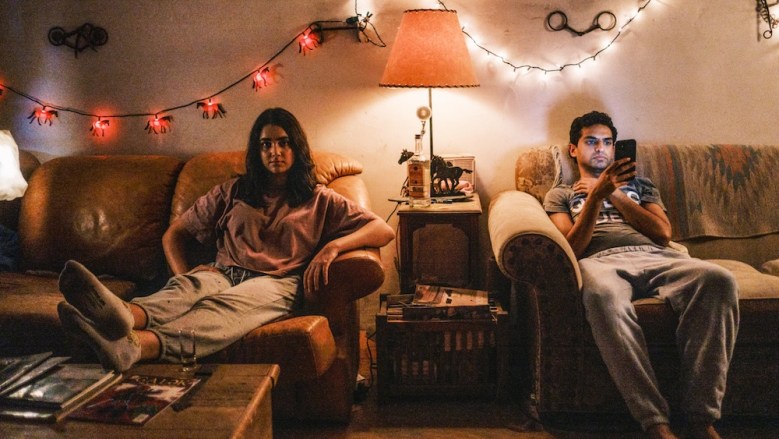 While Sethi and Soni’s script puts Rita and Ravi through early, predictable paces — she’s been lying about her “traditional” values! He’s still going on other first dates! They can’t see eye to eye! — the setting of “7 Days” is ripe for adorable emotional exploration. Soon enough, Ravi is wearing Rita’s (mostly ironic) tee shirts, teaching her how to cook, and really trying to shake off an overhead conversation between Rita and some married dude (executive producer Mark Duplass, in a voice cameo). Rita, closed off as she tends to be, finds herself opening up to this lanky, straightforward stranger. Maybe this matchmaking thing really could work?

With COVID misinformation swirling and tensions at an all-time high, the outside world can’t help but push into Ravi and Rita’s burgeoning bubble of friendship (and maybe more). Just as the pair seem to be heading for a breakthrough, Sethi and Soni throw in some twists, many of which seem to be borne from Sethi’s own experience working in a COVID ward. No, no, “7 Days” doesn’t suddenly turn into “Contagion,” but the film’s resistance to using lockdown as just a narrative conceit to explore other ideas is admirable.

“7 Days” is a film about a lot of things — matchmaking, familial expectations, being your best self, opening your heart — but it’s also about a strange, horrible time in all of our lives and how it changed us. In the minimum of time, Sethi and his cast give that a truly honest go. It might sound exhausting — who needs more COVID content these days? — but it’s not. It’s necessary, and “7 Days” wraps it in enough of an entertaining package that it goes down relatively easy. If Rita and Ravi can find their way to something meaningful and real in such circumstances, we all can.

While some of the film’s later twists feel a touch contrived, like Ravi’s bonding with Rita’s mother (Zenobia Shroff, able to reduce audiences to tears through a minimum of mostly phone- and Zoom-based chats), the good nature of the film keeps them from feeling totally forced. Sethi and producers Mel Eslyn and Liz Cardenas recently picked up the Indie Spirit award for Best First Feature, an accolade that somehow perfectly respects the spirit of the film: a delight on its own, but one that can’t help but imagine an even better future. Here’s hoping for just that for all.

Cinedigm will release “7 Days” in select theaters on Friday, March 25.