Jameson Taillon’s peers in the Yankees’ starting rotation set a high bar for him over the past few days. He didn’t quite clear it on Sunday afternoon, but he came close enough for his team to sweep a three-game series with the Chicago White Sox, one of the American League’s best teams.

Corey Kluber’s no-hitter against the Texas Rangers on Wednesday began a streak of four straight games in which Yankees starters threw at least seven shutout innings. The Yankees had not had a stretch of such dominance since the Hoover administration, when Johnny Allen, George Pipgras, Red Ruffing and Lefty Gomez took turns blanking the opposition in May 1932.

This time around, Kluber and Domingo German closed out a series win in Texas, then Jordan Montgomery and Gerrit Cole dominated the first two games of the Yankees’ series against the first-place White Sox.

Taillon did not extend that streak in Sunday’s series finale at Yankee Stadium, but he had one of his strongest outings this season, throwing five shutout innings while allowing just two hits in a 5-4 Yankees win that was sealed by an Aaron Judge walk-off walk in the ninth inning.

It was the fifth straight game in which a Yankees starter threw five or more shutout innings — a franchise record — and it extended that unit’s streak to 35 straight scoreless innings, which is tied for the second-longest streak in team history, per Stats Perform.

The franchise record of 40 scoreless innings by its starters was set by that imposing group in 1932.

“I didn’t feel any pressure, but I was aware of what they had done that turn through the rotation,” said Taillon, who entered Sunday’s start with a 5.73 E.R.A. “If anything, it just lets me know that everything we’re doing and everything we’re working on, the way we’re throwing our bullpens and the way we’re lifting and the conversations we’re having, it just really reassured me that what we’re doing is right.” 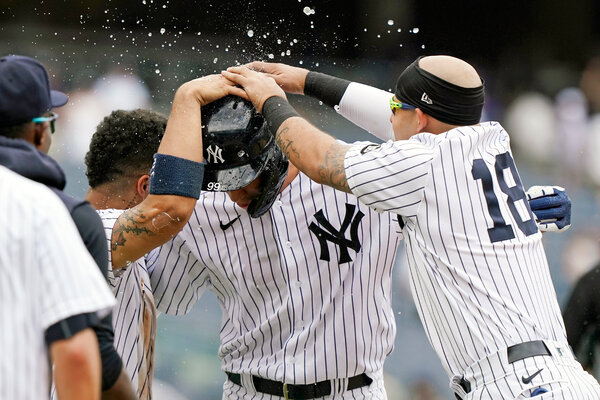 “I still feel he’s going even to another level,” Manager Aaron Boone said of Taillon, who is only nine starts removed from his second Tommy John surgery, in 2019 while with Pittsburgh. “I keep being so encouraged by what we’re seeing.”

The Yankees’ starting rotation, which came into the season with several question marks, did some of its finest work against a Chicago team that entered the series averaging 5.3 runs per game, second best in the majors. Montgomery struck out a career-high 11 batters on Friday night, and Cole, the lone Yankees starter who seemed like a sure thing entering the season, silenced the White Sox on Saturday despite not having his best stuff.

It wasn’t just the arms that paved the way.

Gleyber Torres caught fire in the series, hitting a home run and a walk-off single on Friday, driving in four runs on Saturday and smacking a two-run single on Sunday. Torres, whose glove has also looked better at shortstop as of late, has eight R.B.I. in five games since coming off the Covid-19 injured list.

“The first couple weeks of the season was a struggle,” admitted Torres, who was batting .234 before being sidelined. “I didn’t hit really well.

“I feel really well right now. I go to home plate and just try to be simple, try to put the ball in play and help my team.”

Across the board, it has been an unusual stretch for the Yankees. The cluster of breakthrough coronavirus cases, which included Torres, still had the team missing members of its coaching and support staff in Texas. Kluber threw his no-hitter without the pitching coach, Matt Blake, in the dugout. And on Friday, the Yankees became the first team in M.L.B. history to have a no-hitter, a triple play and a walk-off win in a three-day span, per Stats.

The team even survived closer Aroldis Chapman’s allowing his first earned run of the season thanks to Chicago’s gift of loading the bases ahead of Judge’s game-winning walk.

Boone, who has been around big league teams since he was a child, said, “It was as unique a week as I’ve probably ever experienced.” He added that he was impressed to see so many Yankees — on the field and behind the scenes — step up in an odd situation.

The White Sox, meanwhile, came to New York with the A.L.’s best record, but were swept for the first time all year.

It wasn’t all bad for Chicago, which got first baseman Jose Abreu back from an ankle injury and received yet another terrific performance from pitcher Carlos Rodon in what is looking like a breakout season for the left-handed starter.

Chicago also managed to move past its clubhouse issues after spending a week dealing with the fallout of Manager Tony La Russa criticizing his star rookie, Yermin Mercedes, after he hit a home run on a 3-0 count against Willians Astudillo. La Russa’s comments, which included him taking no issue with the Twins later throwing at Mercedes, drew conflicting reactions within his clubhouse.

With a new series, however, came an effort to turn the page.

“Tony’s like the dad, we’re like his kids. We’re like the bad kids that don’t listen,” White Sox shortstop Tim Anderson said Friday. “But we all get along, so we’re just going to keep pushing.”

The third-place Yankees are off on Monday before continuing their homestand with three games against the fourth-place Toronto Blue Jays. They hope to have Giancarlo Stanton back from a quad strain sometime this week — he is eligible to come off the injured list on Tuesday, but he will have to be evaluated before returning.

With his team on the mend and playing some of its best baseball, Boone was a happy man ahead of the day off. He wasn’t looking to offer any bulletin board material by making bold declarations about his team’s dominance of the White Sox, however.