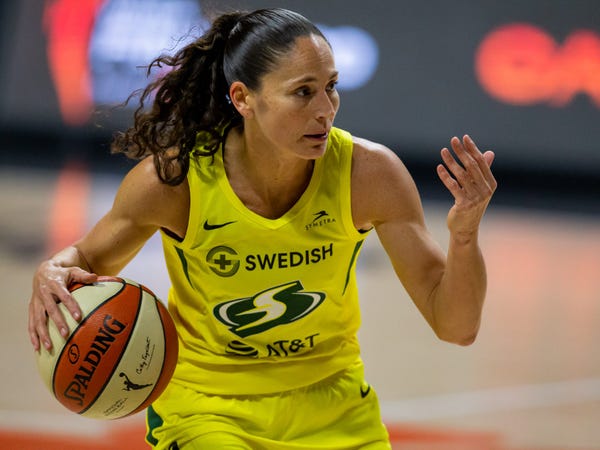 Sue Bird is one of the greatest players in WNBA history, but that doesn't mean she thinks she and her colleagues in the W should be paid the same as their male counterparts.

At least not yet.

In an interview with comedian Adam Ray on his "About Last Night Podcast," the legendary Seattle Storm point guard and four-time WNBA champion explained her stance on equality in basketball.

"I say this totally real — I don't think we should get the same money as NBA players," Bird said. "People think we think that when we say things like 'We want equality.'"

In actuality, the WNBA's all-time assists leader said she believes that calls for equality between men's and women's professional basketball are less about exorbitant salaries than about equal investment and exposure for the WNBA.

"We're just like 'Could I get the same media coverage, and the corporate sponsor looks, and things like that?'" Bird said. "So we can build the business, and then when it's really good — like the NBA is — then we can get that money."

Bird and Ray's conversation stemmed from graphics that began circulating on social media after both Bird, and Los Angeles Lakers star LeBron James won their fourth WNBA and NBA titles, respectively, during the 2020 season. Under side-by-side photos of Bird and James, the photo compared the ballers' seasons in their respective leagues, number of championships, annual salary, and bonus for winning the Finals. The first two categories were exactly the same for each, but the final two were markedly different.

Bird said direct comparisons like the one above "comes back on me."

"That meme has just made my comments, like, on another level," she said.