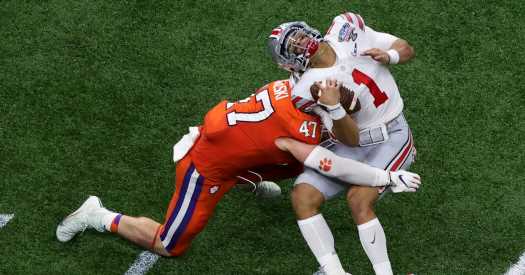 As a high school senior in Georgia, Justin Fields knew immediately that something was wrong when he was tackled in front of his bench during a playoff game. As he looked down at his throwing hand, he saw his right index finger bent at a grotesque angle. Fields rose to his feet and held his hand up to his coach.

“I was sick to my stomach,” his coach, Matt Dickmann, said.

Fields did not play another down in high school. The star quarterback had surgery to insert a pin in his broken finger, did his best to mentor his replacement for the next two weeks as the team advanced, and even broached the idea of returning to play running back. But his coach said no.

“I told him we’re not going to do anything to screw up your future,” Dickmann said. “I could care less about winning another game when a kid has a chance to do what Justin can do.”

Echos of three years ago resonate as Fields, the Ohio State quarterback, enters Monday night’s national championship game against top-ranked Alabama in uncertain physical condition. He took a crunching blow — a helmet to the back of the ribs — in a semifinal win over Clemson on Jan. 1.

After he lay on the turf for several minutes, Fields was helped to the sideline and received an injection or two, he told reporters after the game. The shots allowed him to continue playing, which he did superbly, even as he moved gingerly and often winced when he threw.

Ohio State has refused to disclose any details about the injury or what treatment Fields might need to play against Alabama, leaving open ethical questions about whether Ohio State is putting its hopes for winning a championship ahead of the health interests of its players.

Fields, who is expected to be a high N.F.L. draft pick this spring, pushed back against those suspicions in a video news conference on Thursday. He said that his comments after the game — when he said the right side of his torso was “messed up” and the medical staff “didn’t really give me a diagnosis” — were misconstrued and that he was comfortable with how he was treated.

“I just don’t want anything I’ve said in the postgame interview to kind of get taken out of context and to be like, ‘Oh, they just shot him up and sent him back out there,’” Fields said. “No. It wasn’t like that.”

Still, the inevitable conflicts of interest that arise between players, coaches and the training and medical staff after injuries are highlighted by the inequities of college football, where coaches can reap millions of dollars, doctors can cash in on an association with a team and the players can only bank on an athletic scholarship and a shot at glory.

The downsides, though, are tilted heavily toward the players.

An example of what is at stake played out at Alabama last season, when quarterback Tua Tagovailoa hurried back from ankle surgery to play in a showdown game against Louisiana State. Tagovailoa played valiantly in defeat, but was hobbling by the end of the game. The next week, against Mississippi State, he suffered a hip injury that ended his season and threatened his career. Though he recovered, he dropped from the presumed top pick in the N.F.L. draft to fifth, a fall that will cost him $6 million over the length of his four-year rookie contract.

Alabama Coach Nick Saban, in response last year to a question before the L.S.U. game about the risk of playing Tagovailoa, said players created value in the eyes of N.F.L. evaluators for their ability to play through some injuries. After that game, Saban praised Tagovailoa as a warrior — much the way Ohio State Coach Ryan Day spoke about Fields last week, veering from a question about how he handled the injury as the team’s coach. 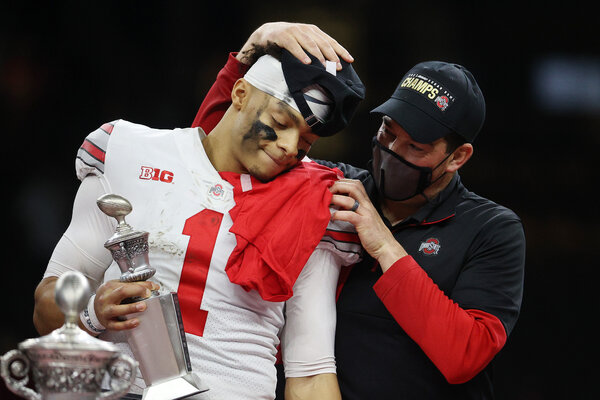 No matter how coaches approach injuries, they often have considerable financial incentive to make sure a star player can stay on the field. Day banked a $250,000 bonus after his team’s win over Clemson. He could earn an additional $350,000 with a win over Alabama — seven times the bonus he is due if the team maintains a 3.0 grade-point average.

“There’s a big crisis in football and college basketball because of the money generated in those two sports,” said Scott Lynch, a former team doctor at Penn State who accused the university of removing him after he complained about interference from the football coach, James Franklin. “The players need an advocate because there are a lot of kids from poor homes that don’t have a lot of resources, and those kids are at risk of being taken advantage of.”

Lynch, who is seeking to have a whistle-blower lawsuit against Penn State reinstated after it was dismissed for exceeding the statute of limitations, said he was asked not to divulge details of injuries to some players and was prodded to medically disqualify others who had not yet had treatment. Franklin and Penn State have denied the accusations.

Lynch said he was attuned to an elite athlete’s competitive drive and the reality that sometimes players might be willing to take on more risk. He won an N.C.A.A. wrestling championship at Penn State while enduring a torn knee ligament. His concern, though, is that some athletes are not getting a full picture of the risk or are being influenced by coaches to shrug it off.

And he is far from alone.

A 2019 nationwide survey of 1,400 college athletic trainers found that nearly one in five reported that a coach had played an athlete who was deemed medically unfit to play.

In many cases, players want to remain on the field, if at all possible.

Henry Bazakas, an offensive lineman at Cal who opted out of this season, suffered a right knee injury two years ago in a training camp drill. He gritted through the first three games before telling trainers his knee still hurt. An M.R.I. exam revealed a torn anterior cruciate ligament.

His first question to doctors: Can I still play on it?

His position coach’s first question: Can you still play on it?

“In those situations, do college age people really know what’s best for their long-term health?” said Bazakas, who was told by a doctor that continuing to play could do further damage. “If you asked my mom, I probably should have told them my knee hurt and I couldn’t play. But I’m glad I played because you only get one chance. Either way, it was a season-ending injury, but I got to play three games. I kind of view that as a win.”

Michael LeRoy, an employment law professor at the University of Illinois, said states were spurred long ago to regulate pain-masking injections in horse racing and boxing. The N.F.L.’s culture of sticking players with a needle and sending them out to play, LeRoy added, has been significantly reformed through collective bargaining, which has provided players with a grievance process.

And professional players — unlike college players — have agents.

“College players have nothing like that,” LeRoy said. “They have no advocate except the coach, and the coach has an interest in putting the player back on the field.”

Day, asked to detail the discussions that took place among the coaches, doctors and trainers about whether Fields could continue against Clemson, said the medical people “diagnose what happened and then make the decision on whether he’s able to go back in the game — that’s what happened here.” He added that Fields’s feedback was considered, too.

Asked how he evaluated whether Fields could protect himself from further injury, Day said, “That’s up to our medical people.”

Ultimately, though, each coach must decide whether he wants a player in a game.

A coach from a major conference, speaking on the condition of anonymity because he was not familiar with Fields’s medical condition, said a crucial standard is whether playing could cause additional injury or merely pain.

“You have to make sure the doctors can say: ‘Hey, there’s nothing he can do to really hurt himself. Can he just endure the pain?’” the coach said. “Sometimes there are injuries that are like that.”

Fields, though, said the injury caused him to take a longer stride to ease the pain in his torso. “You might not have all of the body parts working like you would, I guess, want them to,” he said. “You would have to alter another thing to get the ball where it needs to go.”

That could be troubling to some — Dizzy Dean, the Hall of Fame pitcher who wrecked his arm while trying to pitch with a broken toe, has long been a cautionary tale in that sport — but it probably means little to Fields, who has gone to extraordinary lengths to play this season.

He was the face of a campaign to get the Big Ten presidents to reverse course after they voted in August to postpone the season because of the coronavirus pandemic, starting an online petition that generated more than 300,000 signatures. As the signatures mounted, the Ohio State team doctor, James Borchers, made the case in front of the presidents that football could return safely.

The presidents agreed to let the season commence based on health and safety protocols that were more stringent than in other conferences. But when one of them — the 21 days players were required to sit out after contracting the virus — was viewed as too onerous, Ohio State successfully lobbied to have it reduced to 17 days.

It is not just during the pandemic that Ohio State has aggressively guarded its athletic interests.

The university last year agreed to pay $41 million to settle some of the claims against a former team doctor, Richard H. Strauss, who for nearly two decades fondled hundreds of athletes during physicals. When the police investigated assault allegations by a former assistant football coach against his wife, it was covered up until it appeared in a news report in 2018. And when Buckeyes players returned to school last summer, they were asked to sign waivers acknowledging the risk of contracting Covid-19.

If Fields is fortunate, Ohio State will protect him just as vigorously against Alabama.