Who could blame Wisconsin Badgers quarterback Graham Mertz for being a little excited Wednesday after his team defeated Wake Forest in the Duke's Mayo Bowl?

Mertz threw for 130 yards and no interceptions in the 42-28 win — but while celebrating inside the Badgers' locker room after the game, he was captured on video dropping the team's football-shaped crystal trophy, shattering it on the floor.

"We just wanted everybody to have a piece of that trophy," Wisconsin coach Paul Chryst joked after Mertz's post-game fumble.

Wisconsin players were originally tight-lipped as to who shattered it, including Jack Sanborn, named Most Valuable Player in the contest, who exclaimed "no comment." But videos soon emerged online.

"There's video proof out there who broke the trophy, and I'm not going to say anything else regarding that," added Badgers linebacker Noah Burks, who intercepted Wake Forest quarterback Sam Hartman late in the third quarter. "Although we did not know the trophy came off."

Mertz later confessed to breaking the trophy during a post-game virtual news conference.

"My mama would call it a boo-boo, but it's all right, we'll bounce back," he continued. "It'll be the last trophy I ever drop, I guarantee you that."

Players attempted to salvage their prize by taping an actual jar of Duke's Real Mayonnaise to the base of the trophy — an unforeseen victory for the sponsor of the bowl game, which was played in Charlotte, N.C.

Despite the mishap, Mertz accounted for three touchdowns and Wisconsin turned four second-half interceptions – all by different players – into 21 points to turn a close game into a near-rout of the Demon Deacons. Five players scored touchdowns for the Badgers.

The game was tied 21-21 late in the third quarter, until Burks intercepted Hartman and returned the ball 41 yards to set up a 14-yard scoring strike from Mertz to fullback Mason Stokke, giving the Badgers their first lead.

Hartman was picked off on the next three possessions despite throwing one interception all season.

THE NAME GAME: A FEW ATHLETES PRIMED FOR BREAKOUTS IN '21

"It felt like one led to the other," said Sanborn, adding that the Badgers picked up on some of Hartman’s tendencies. 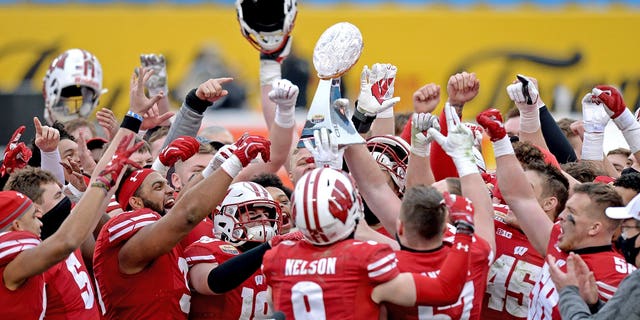 "A quick reminder that we have the best trophy in football," the account wrote.