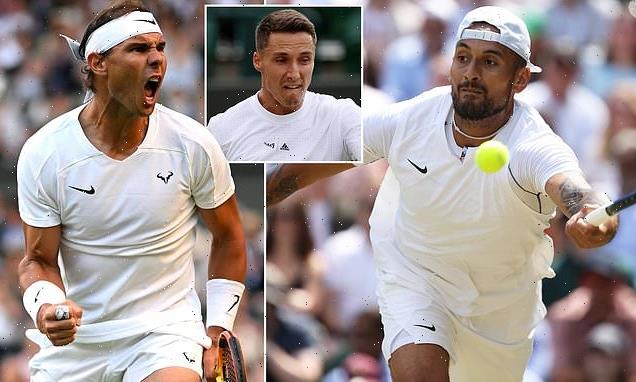 Wimbledon 2022 LIVE: Tennis bad boy Nick Kyrgios returns to the court in the quarter-finals, Joe Salisbury keeps the British hopes alive in the doubles, while Rafa Nadal continues his search for the calendar Grand Slam

Follow MailOnline’s live blog for all the latest news and updates on the 2022 Wimbledon Championships:

The French get the first point of the game but Ram smashes an over head shot past their opponents to pull it back to 15-15.

More brilliant close-net play sees Ram and Salisbury pull ahead but the Brit double faults to allow the French the chance to fashion a break point.

But the French don’t take it as Ram is at the net for an easy put away volley to go 40-30 and again to clinch the hold.

Mahut has been working on his serve in the lead up to Wimbledon and it’s paying off as two huge serve are unreturnable for Salisbury and Ram and the French go 30-0 up.

At 40-0, the French pairing look to have the game in their hands but Mahhut double faults before cheeky lob from Salisbury just catches the line. Salisbury and Ram then manage to pull it back to deuce.

But the French catch Salisbury and Ram off guard and another unreturnable serve sees them hold and level the set.

Ram gets the match underway as he serves first.

The net cord is called into action on the first point of the game but Salisbury handles it well as he duels with the French player to go 15-0.

Ram then double faults to allow the French a point but he then holds comfortably to 15.

Joe Salisbury is the first Brit in action today as he takes to Court 2 alongside Rajeev Ram against the French pairing of Nicolas Mahut & Edouard Roger-Vasselin.

Salisbury is in good company with American Ram as the pair are ranked World No 1 and 2 respectively in the Men’s Doubles.

The four athletes are out on a sunny Court 2 to warm up before the action gets underway. 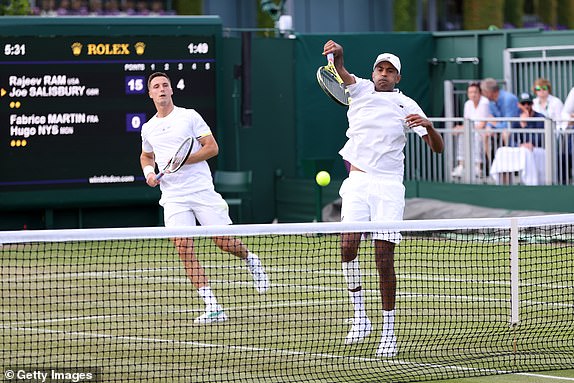 Novak Djokovic may be the defending champion and top seed but he had to battle through his meeting with Italian youngster Sinner on day nine and semi-final opponent Cam Norrie is relishing the challenge.

Norrie reached the last four of a Grand Slam for the first time after fighting back to beat unseeded David Goffin 3-6, 7-5, 2-6, 6-3, 7-5 in front of the Duke and Duchess of Cambridge and a raucous Court 1 crowd to set up a date with Djokovic.

The Serb will undoubtedly be the favourite against Norrie but the British No 1 has vowed to take it to Djokovic.

Rafael Nadal will be looking to seal his spot in the semi-finals today as he continues his run at the calendar Grand Slam.

Undoubtedly, your money would be on either the Spaniard or his rival and defending champion Novak Djokovic to clinch the title. After all, these two are just built differently…

Good news for SW19 as it looks set to be a dry day!

Temperatures are set to reach a high of 25C (77F) and it looks like it will be a cloudy day with a light breeze.

Although it is not set to be blistering sun, at least the chances of another rain delay appear to be low – with the highest chance currently standing at six per cent. 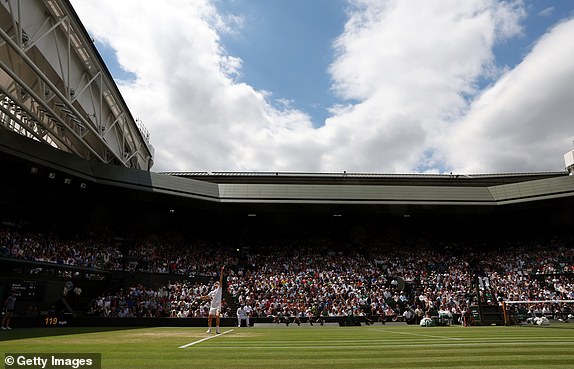 Be it applauding errors, arguing with chair umpires or ‘tanking’ games to halt his opponents’ momentum, Kyrgios’ gamesmanship at Wimbledon has irked many – including the man they call ‘Scud.’

Kyrgios’s actions have unsurprisingly caused a stir in the tennis world with many slamming the behaviour and Australian legend Mark Philippoussis is no exception.

The 45-year-old fired an ace at Nick Kyrgios, declaring he is a bad influence on kids – before revealing his blueprint for beating the controversial star.

‘I don’t mind people getting upset at a line call, or questioning something or smashing a racket, that’s going to get it out of your system but I think it’s the constant stuff that opponents have to deal with,’ Philippoussis said in an extraordinary rant.

‘Kids are watching, man, they can hear things, they’ve got the mics on the court … you have to think about these things.’

His performance was granted the royal seal of approval as Wills and Kate watched on at Centre Court.

And Norrie will look to continue to ride the British wave of support as he faces defending champion Novak Djokovic in the semi-finals.

Relive the thriller with Mike Dickson’s match report below…

Joe Salisbury takes to court alongside Men’s Doubles partner Rajeev Ram in half an hour’s time.

There is no ambiguity in the ambitions of Britain’s top-ranked doubles player — it concerns Wimbledon and ticking one last box. Only there is a minor complication.

‘If I lie down on grass, I will get a skin reaction and it gets very itchy. It is not like I am dying but I wouldn’t sit on grass for too long. I am trying to win Wimbledon for the first time and I’m allergic to grass, I get why it might sound strange.’

It’s been quite the tournament for Australian Nick Kyrgios. From explosive rants to on-court spitting to a particularly tense crash with Stefanos Tsitsipas, we’ve seen it all.

Yet, the bad boy of tennis claimed this week that there is no such thing as bad publicity. But it is unlikely he could have predicted the latest installment of his SW19 saga.

On the eve of his quarter-final, it was revealed the Australian is subject of an allegation of domestic abuse.

Click below for more on the allegation from Mike Dickson…

The action at SW19 returns on day 10. Rafael Nadal takes stage on Centre Court but all eyes will be on Court 1 as Nick Kyrgios continues his explosive Wimbledon journey.

There were also victories for 34-year-old Tatjana Maria and Ons Jabeur in the Ladies’ Singles and retired Laura Robson in the Ladies’ Doubles Invitational.

British hope Joe Salisbury gets the action underway this morning in the Mens’ Doubles alongside Rajeev Ram as they face Nicolas Mahut and Edouard Roger-Vasselin, while his countryman Neal Skupski is also in action in the Mixed Doubles semi-final.

2019 champion Simona Halep continues her search for another Wimbledon title as she faces Amanda Anisimova, who knocked American teenage sensation Coco Gauff out in the third round.

Click below to read the full order of play today…

It was a jam-packed day of action yesterday as top seed Novak Djokovic came from two sets down against 20-year-old Italian Jannik Sinner to book his place in the semi finals.

Meanwhile, the final British hope in the singles, Cameron Norrie, endured a five-set thriller of his own against David Goffin to set up a semi-final date with the defending champion.

Today, bad boy Nick Kyrgios and Australian Open and Roland Garros champion Rafael Nadal hope to follow Djokovic and Norrie through to the next stage.

2019 champion Simona Halep is also in action in the women’s singles quarter finals against Amanda Anisimova, while Britain’s Neal Skupski takes to court in the mixed doubles semi finals.