It shouldn't have come as a great surprise – although it apparently did for large portions of the viewing public – that a group of Indigenous Australians, playing in a match to celebrate their culture as well as that of Maori New Zealand, weren't particularly enamoured by a song penned by a Scottish presbyterian in 1878 and not adopted as the anthem until 1984.

Cody Walker, the captain of the Indigenous All Stars side, didn't sing along and nor was he girt by a sea of rousing emotion when cameras panned to his team-mates. The only joyful strains to be found were in their stirring pre-game dance, the roots of which wind their way back more than 50,000 years. Peter Dodds McCormick, who wrote Advance Australia Fair, arrived in Sydney in 1855.

"To be honest, no," was the response of a candid Walker when asked if he was comfortable with the notion and meaning of Advance Australia Fair, which many indigenous Australians find to be distant, devoid of any meaning on their part and another symbol of colonialism and dispossession.

This is hardly a new concern, although it's not one that's likely to be solved on the shouty echo-chambers of morning television or talkback radio. Rugby league can do far better than 'If you don't love it, leave it' bumper stickers and has done just that, with Mal Meninga and Laurie Daley among those calling for a wider discussion about the anthem and whether it remains the right fit for a modern Australia. 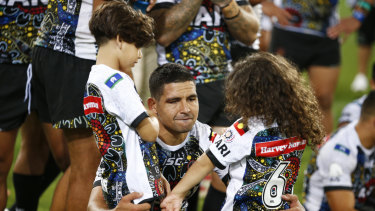 Family matters: Cody Walker with his children after the game.Credit:AAP

The NRL finds itself in a good position to have a sensible discussion on this tricky debate. The league is over-represented by Indigenous Australians in the best possible way, many of them who are towering and respected figures within the sport and the wider population.

Meninga would welcome another referendum on the matter, although he may have to take a ticket. Should Labor win the next Federal election, they have already promised a referendum on an Indigenous voice in parliament, followed by a plebiscite on a republic, two issues Meninga would likely be just as passionate about.

But he still would hope players in Kangaroos colours sing it when played before Test matches: "We expect them to sing the national anthem, but I'm also in favour of the fact, if it is offensive to Indigenous Australians, let's have a discussion about it."

It's far from a partisan issue. Anthony Mundine, for example, considers the anthem flat-out racist and never welcomed it before fights during his career. At times, he stayed in the dressing rooms until it was concluded.

Other Indigenous athletes and Australians are able to move beyond the dated lyrics and find meaning in a song that is supposed to represent unity as a nation. This was Andrew Fifita after Friday night's game:  "At the end of the day, I just sing it proudly. That's our anthem, so I sing it proudly."

Indigenous writer and broadcaster Stan Grant would welcome a new anthem that was embraced by all Australians, including the many white ones that think the current offering is just a bit average in general. But while Advance Australia Fair remained, it should be sung with gusto, or not played at all. And those that offer their peaceful, personal protests should not be persecuted.

Anthems have become a lightning rod for controversy in sport. In the US, former NFL quarterback Colin Kaepernick was effectively shut out by league owners for kneeling during the anthem, his way of protesting social injustice. He settled a complaint with the NFL last week and hopes to play again in the future.

It's not just an Indigenous issue either. A number of Australian athletes in Rio were given some stick for not singing the words to the anthem when they accepted their gold medals. One was swimmer Kyle Chalmers, who had just stunned the world at 18 years of age. It was all jingoistic and plain silly.

There is a solution. Spain's anthem is the Marcha Real, one of the oldest in the world dating back to 1761. Nobody can be accused of ignoring its lyrics because it doesn't have any. Given nobody knows anything other than the first verse of Advance Australia Fair anyway, maybe it's not such a bad idea.