Umpires say there are no obvious answers to avoid missing no-balls and have preached technique as the best way to keep an eye on the popping crease.

As the International Cricket Council conceded to the The Age it was too expensive to have a dedicated camera and umpire focused on no balls, this means players are reliant on on-field umpires to make the right call unless by happenstance there is a batsman who calls for a decision review when given out.

The debate over whether greater focus is needed has flared after Indian spearhead Ishant Sharma was found to not have had any part of his front foot behind the white line having dismissed Aaron Finch for a duck in the second innings in the Adelaide Test.

Finch only won a reprieve because he called for a decision review on the lbw decision given by umpire Kumar Dharmasena, where the first camera angle assessed is whether the bowler had delivered a legal delivery.

Sharma was later shown by broadcasters to have over-stepped the crease several times throughout the innings but escaped being called for a no ball by umpires Dharmasena and Nigel Llong. 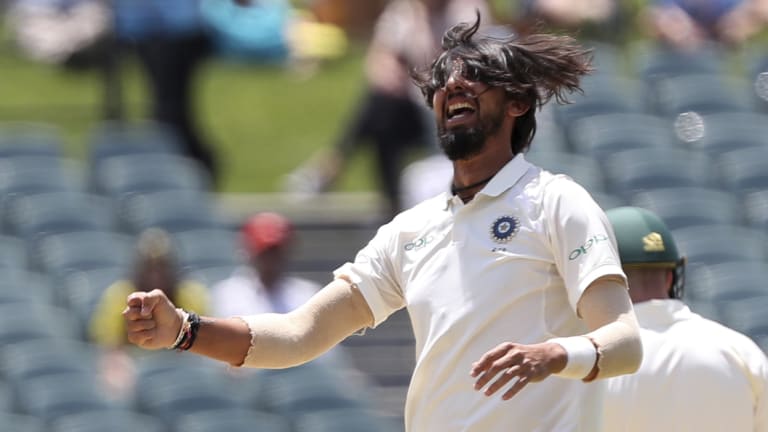 Ishant Sharma’s second-innings dismissal of Aaron Finch in Adelaide was overturned after a review.Credit:AP

The ICC has a four-man umpiring coaches panel comprising Peter Manuel (Sri Lanka), Denis Burns (England), David Levens (Australia) and Karl Hurter (South Africa) but state-based umpires coaches said on Tuesday there were no definitive ways to ensure all no balls were picked up unless technology was used.

One umpiring official said umpires were taught to keep their head as still as possible from the moment they checked the popping crease to then in a split second later potentially having to judge a bowler's appeal.

"What umpires are taught from the beginning is when the bowler starts his run up and the ball becomes live, you focus on a point at the batsman's end. You look at a logo on his bat or his pad or at the stumps if you can see them at his end. You hold that as your hard focus," he said.

"When the bowler arrives, you drop your eyes without moving any other part of your body, particularly your head, so you have a complete, stable environment for your eyes. You flick your eyes down almost in your peripheral vision, you pick up whether it is a legal ball and then go straight back to where you were. It's a split-second thing so that the lens of the eye doesn't have time to readjust to the degree where you are not going to get that sharp focus.

"When you have a got a bowler who is problematical in whether or not he is bowling no balls, if you allow yourself to become pre-occupied with that, as umpires of old used to do, focusing on that front foot waiting for the bowler to arrive, you will then miss the finer detail at the other end. That's the issue we need to address."

Umpires privately say while DRS will at least overcome the "howlers", they question whether enough is being done at the elite level to have umpires make the best call possible.

One official also raised the point that while one umpire could have the best eyesight and ability to hone in on no balls, it did not mean that person would be best suited to adjudicating in other areas.

The ICC maintains a trial run of a system used in a one-day series between England and Pakistan in 2016 showed there was not enough merit in having a third umpire assess each ball of a match.

An ICC spokeswoman said the technology used in England had been a success but cost was an issue.

"At present there is no alternative technology out there."

The English trial involved the on-field umpire not calling any no balls without confirmation from the third umpire, who had access to four side-on cameras to deliberate on no balls, run outs and stumpings. There were also instant slow motion replays to check whether deliveries were legal. If a no ball was assessed, the third umpire relayed his decision to the on-field umpire by a "pager" watch. This watch vibrated when it was a no ball.

Former Australian captain Ricky Ponting was particularly vocal during the Adelaide Test and called for change. Ponting questioned whether umpires were even properly checking for no balls.

Umpires are marked down heavily by match referees and officials if they miss no-balls but there is a general acknowledgement from all participants in the game that it is tough to always make the right call in the blink of an eye. However, that assessment changes when a bowler has clearly over-stepped, particularly when it results in a wicket-taking delivery.

Technology remains a double-edged sword in the sport. While it's important to get the right decision, repeated mistakes highlighted on replay can impact on the confidence – and standing – of an umpire.

Llong and Dharmasena found themselves under the spotlight for the no-ball calls and a DRS system which repeatedly overturned their decisions.

These decisions baffled the Australians, with skipper Tim Paine questioning the technology and whether it adjusted to the deteriorating bounce of a pitch.