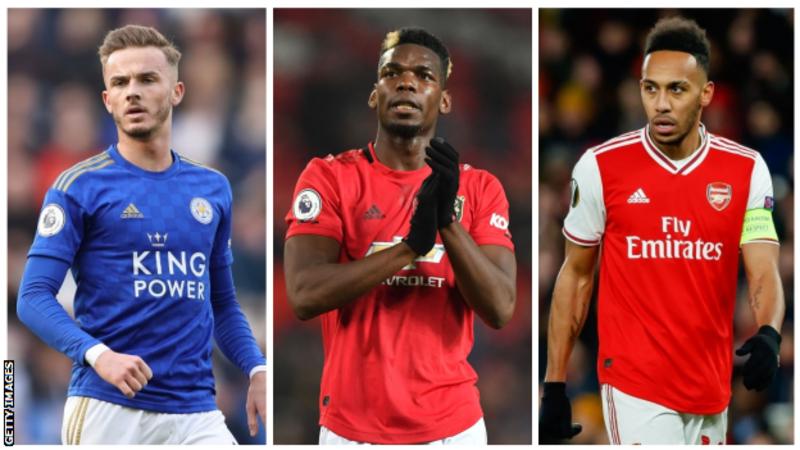 The uncertainty over the remainder of the Premier League season means there is also a lack of clarity over the next transfer window.

When will it run to and from? How will spending be affected? And what about the PR implications of paying millions for players in the immediate aftermath of the coronavirus pandemic?

But what is for sure is that top-flight managers will be on the lookout for new recruits, whenever that time comes, and the suspension of football will have given clubs plenty of time to assess their squads.

We have assessed all 20 Premier League clubs. On Friday we’ll look at the bottom half, but here is our analysis of the teams in the top 10.

Liverpool: If it ain’t broke…

On course to win their first league title in 30 years, Liverpool unsurprisingly have no real concerns over the make-up of their squad, with nine first-team players at what we would generally consider to be the peak of their careers.

They do not have a single first-team regular past their peak. The only other top-10 club who can say the same is Manchester United. 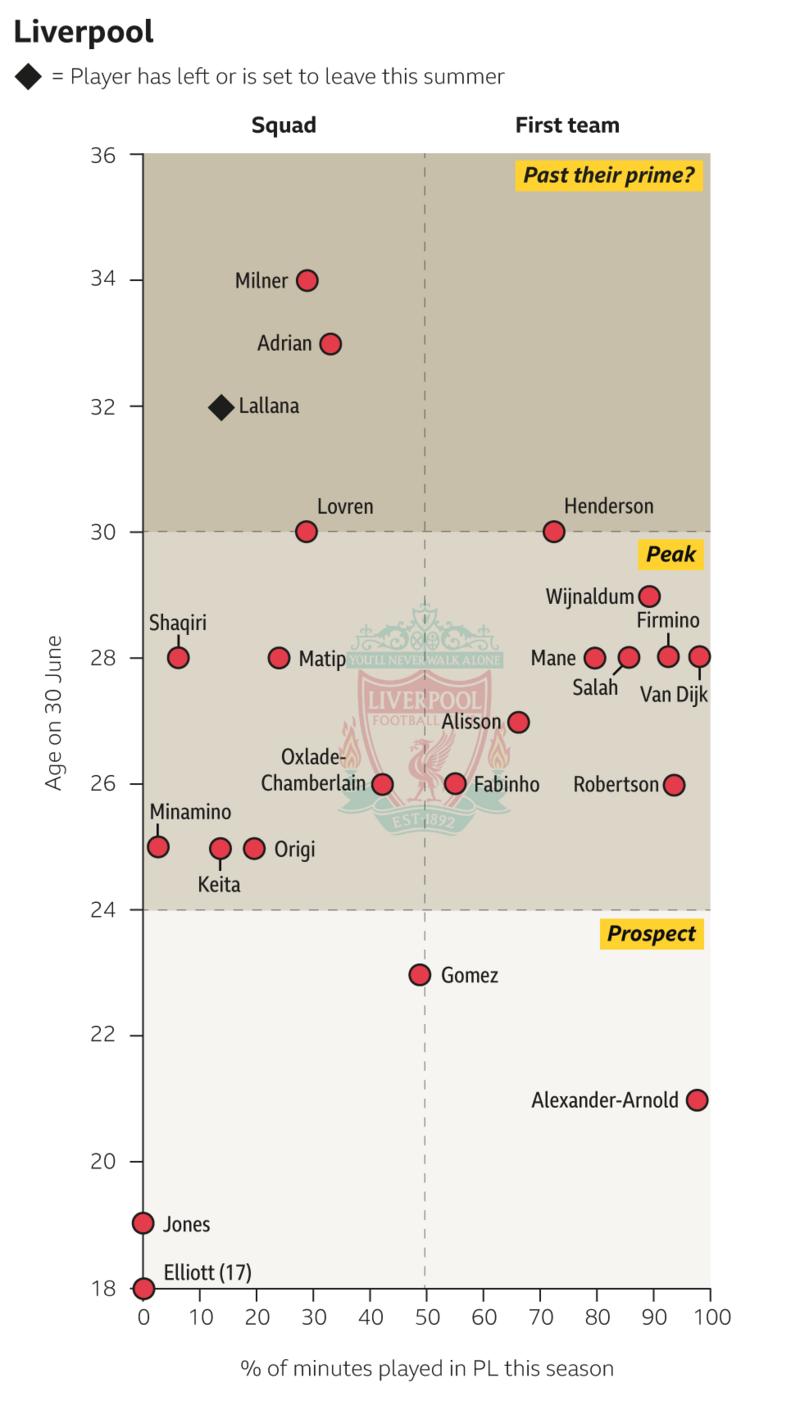 Given Liverpool’s planning pedigree, however, the champions-elect could look to replace one of those nine with a star for the future, to avoid letting them all grow old together and the need for mass replacements in a few years’ time. By way of warning, they may look to Sir Alex Ferguson’s final title triumph in 2013, when he guided Manchester United to top-flight success but left an ageing squad who were unable to match that achievement in subsequent years.

The lack of a settled defence has been the problem for Manchester City this season, with the club having to rely heavily on the now 35-year-old midfielder Fernandinho to fill in at the back. The Brazilian is Pep Guardiola’s oldest outfield player but he has played 79% of all Premier League minutes – the third-highest of any of the club’s outfield players. 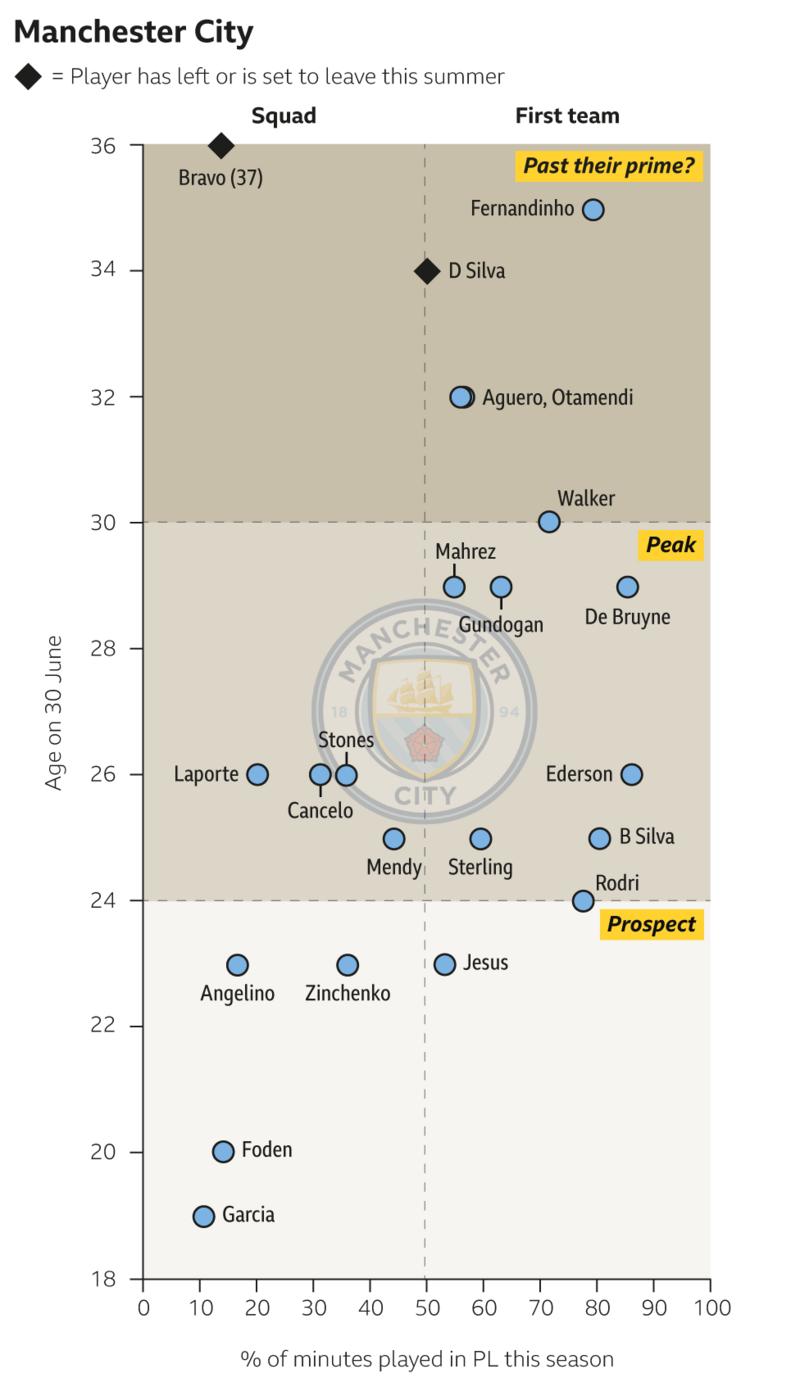 But in Benjamin Mendy, Aymeric Laporte, John Stones and Joao Cancelo, the club do already have a back four in reserve worth £216.5m that Guardiola has been unable or unwilling to put on the pitch.

Although 34-year-old David Silva will leave huge boots to fill, Guardiola has already named hot prospect Phil Foden as his successor, but with a possible two-year European ban looming, he might not be the only player to depart.

Leicester: The next generation

With just two first-team players at their peak, Leicester’s mix of title-winning veterans and top-class young talent makes it arguably the most unique squad in the Premier League. 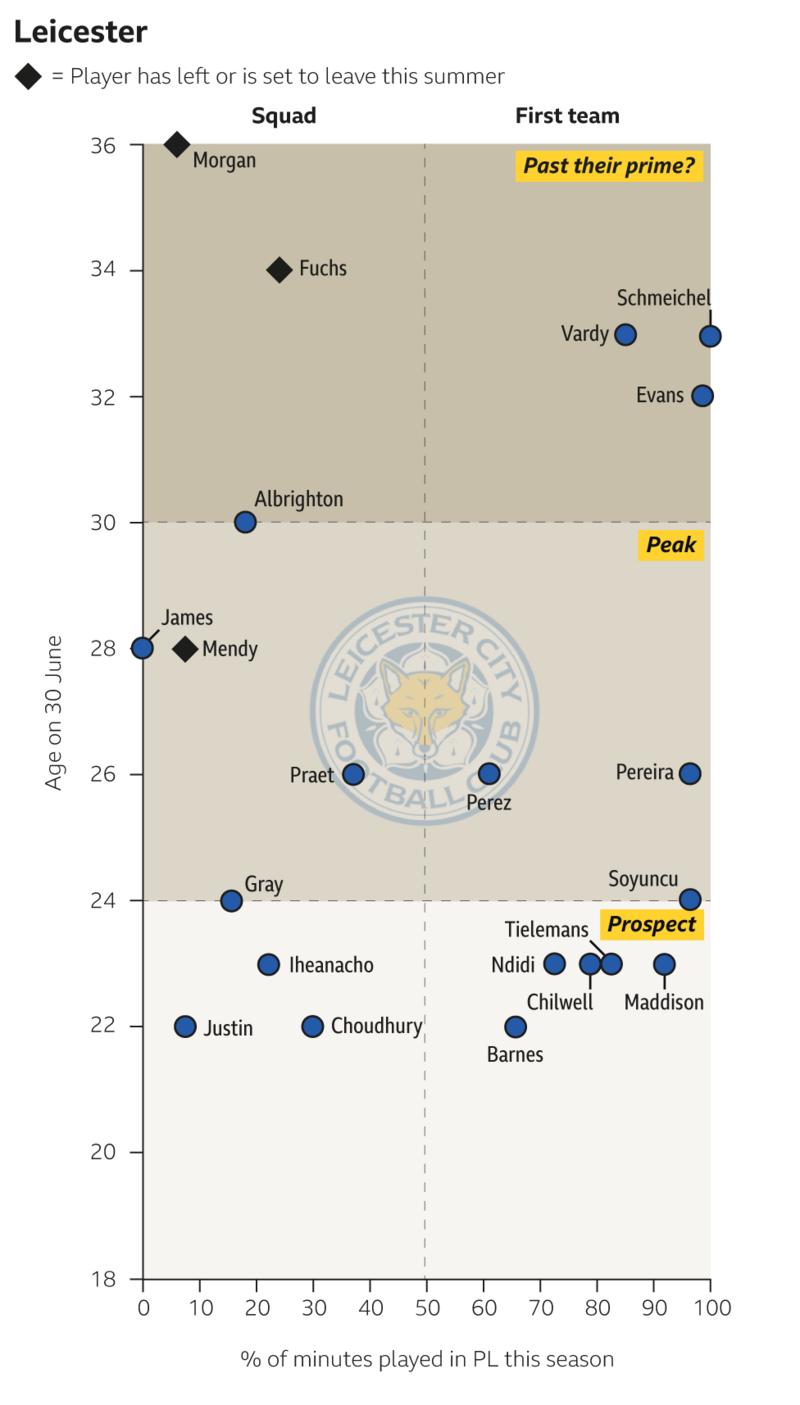 With Christian Fuchs and Wes Morgan leaving, Brendan Rodgers will need defenders, while the club will one day have to attempt the Herculean task of finding the successor to Jamie Vardy, who turned 33 in January.

The emergence of Caglar Soyuncu and Harvey Barnes means the Foxes have as many as six fantastic young prospects in the first team that Rodgers will hope he can keep together for next season.

After no signings in his first two transfer windows, it will be interesting to see if Frank Lampard continues to trust in youth to replace the front three (Olivier Giroud, Pedro and Willian) of experienced attackers set to leave, although Giroud may yet extend his contract for another year. 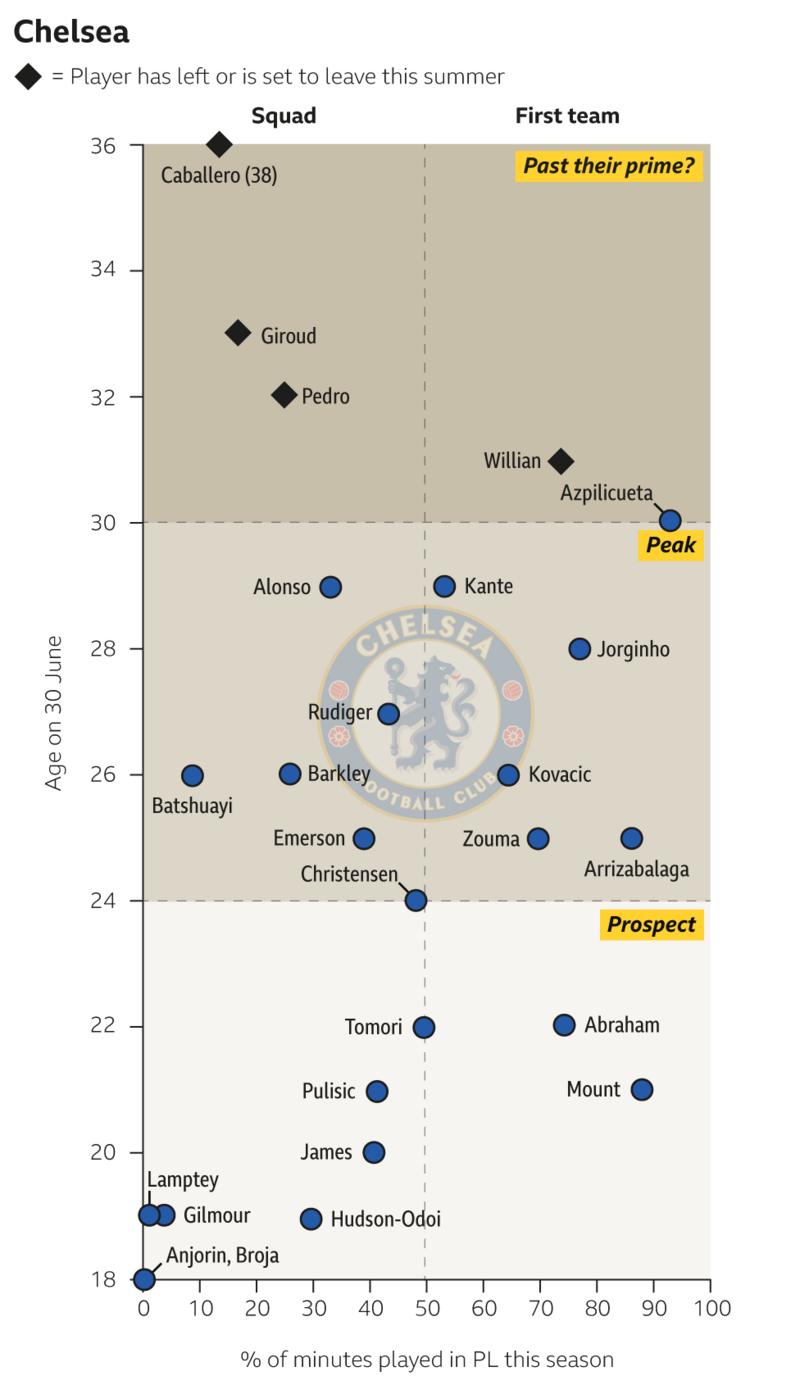 The signing of 27-year-old Ajax winger Hakim Ziyech will bring in a replacement at his peak, while Lampard may rely on prospects Christian Pulisic and Callum Hudson-Odoi to establish themselves next season.

Willy Caballero’s departure means the club will also need another goalkeeper, whether as back-up or as direct competition to the under-fire Kepa Arrizabalaga.

Manchester United: What to do about Pogba?

Ole Gunnar Solskjaer’s focus on youth means that Manchester United have played the youngest average starting XI in the Premier League this season, with six players yet to reach their peak and the oldest outfield players aged just 27. 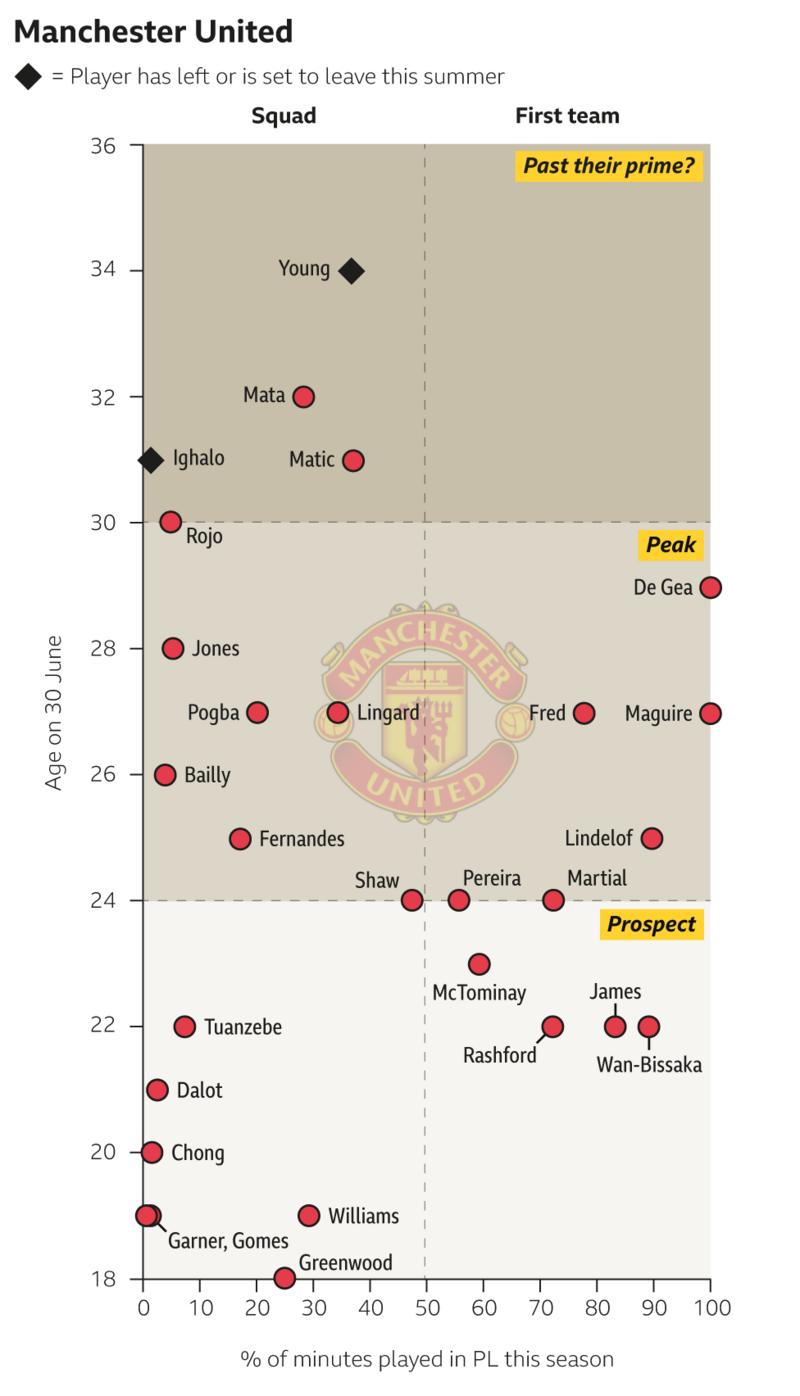 But this transfer window will likely revolve around the future of Paul Pogba, who has started just five Premier League games this season due to injury and considered having “a new challenge somewhere else” last summer.

With Odion Ighalo only on loan until the end of the season, a striker will likely be one of the club’s priorities, given Romelu Lukaku’s exit in August and Marcus Rashford’s recent injury problems.

With 11 players playing at least two-thirds of minutes this season, Wolves have the most settled side in the Premier League but very little squad depth beyond it, having used the fewest players overall (20). 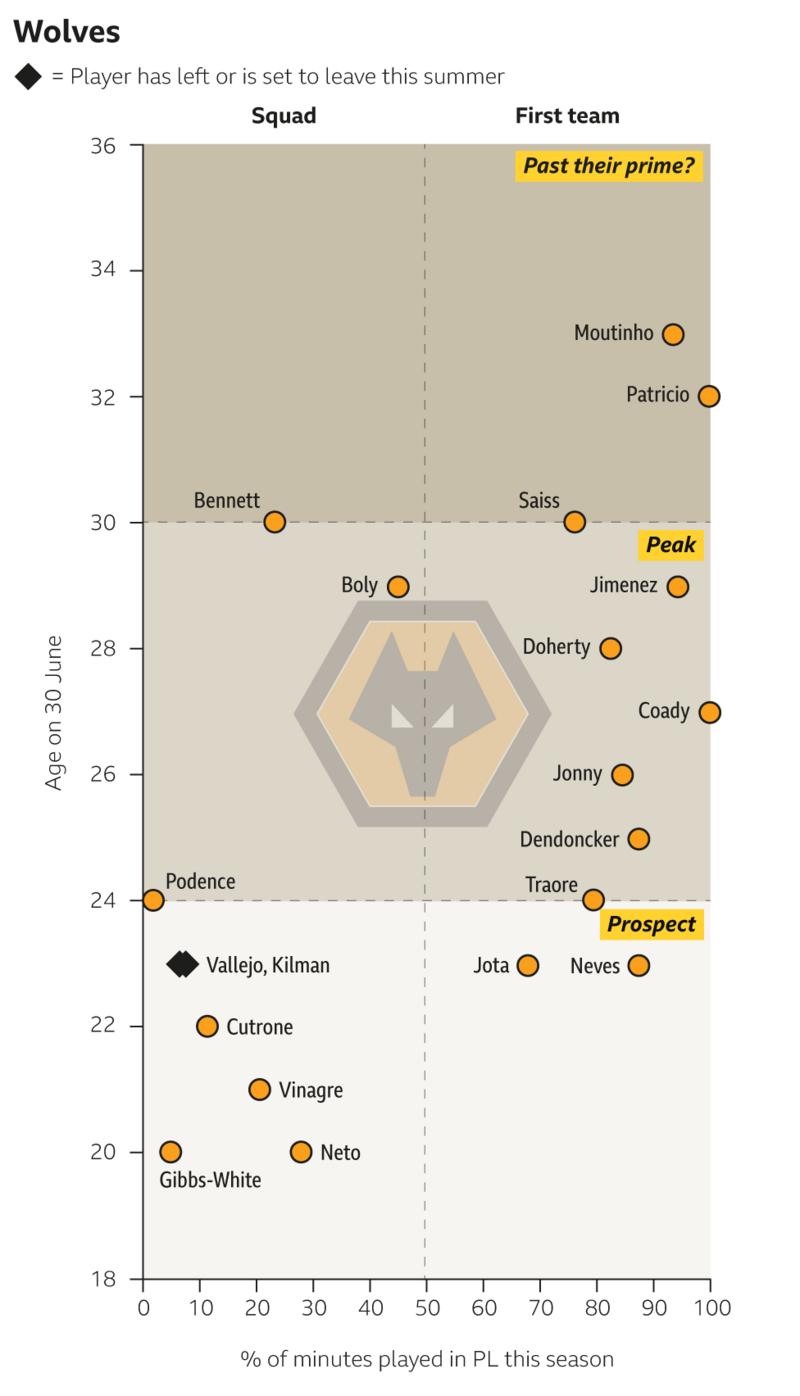 Of their first-team players, Joao Moutinho is the only one approaching the end of his career, but the club may have to spend big to adequately fill the boots of the influential midfielder.

A striker might also be on Nuno’s shopping list, after last summer’s £16m signing Patrick Cutrone joined Fiorentina on an 18-month loan deal in January.

Sheffield United: A new number one

Like Wolves, Sheffield United have found success playing a settled first team, with the “back nine” all playing more than 80% of minutes in the Premier League. 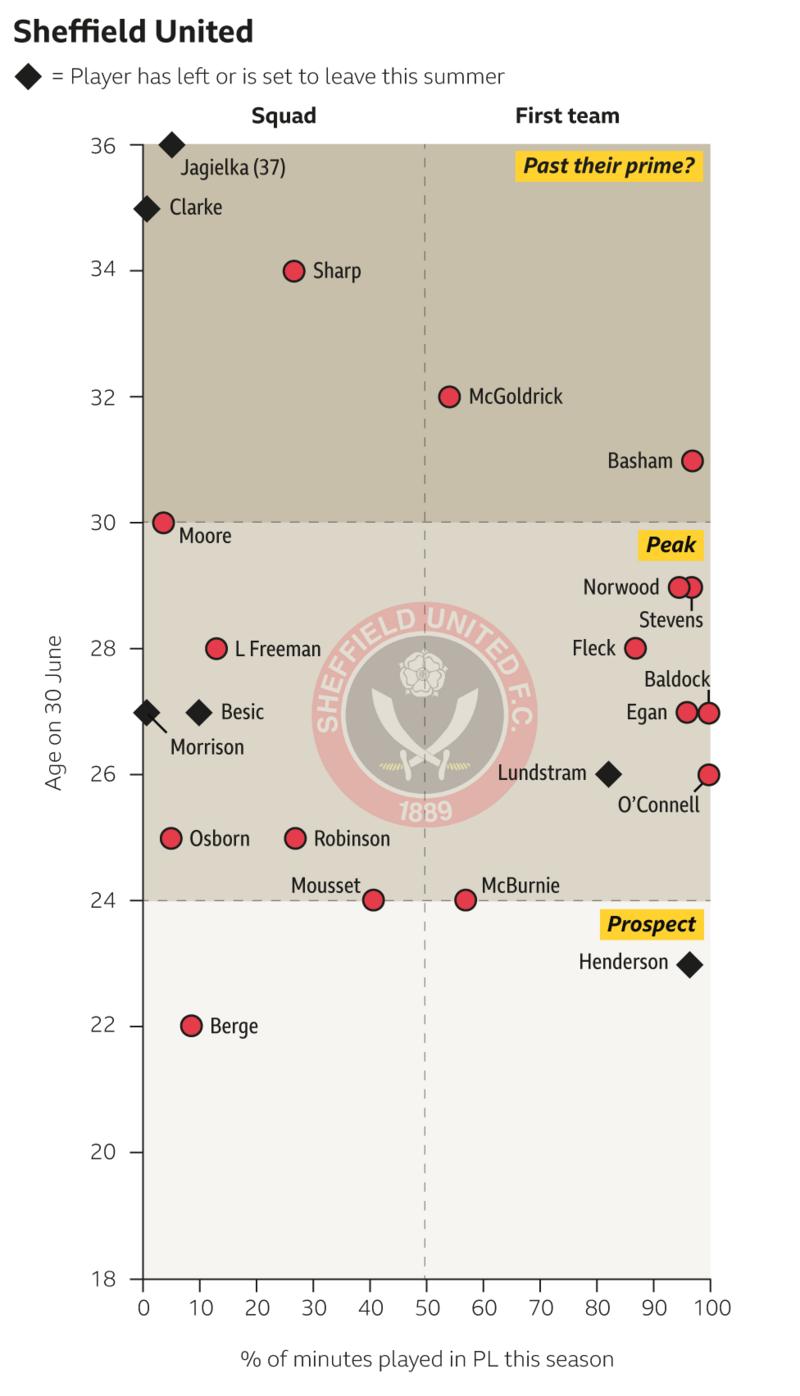 The club’s main challenge will be to replace Dean Henderson, with the young goalkeeper set to return to Manchester United after an impressive two years on loan.

With no striker establishing himself and Billy Sharp and David McGoldrick in their thirties, Wilder might look to further add to his options up front.

Tottenham: An unsettled side

Having used more players than any other side this season (29), Tottenham have the most disrupted and unsettled squad in the Premier League.

While most teams have five or six players who have featured for more than 75% of all league minutes, poor form and a plethora of injuries mean that Toby Alderweireld is the only one to do so for Spurs this season. 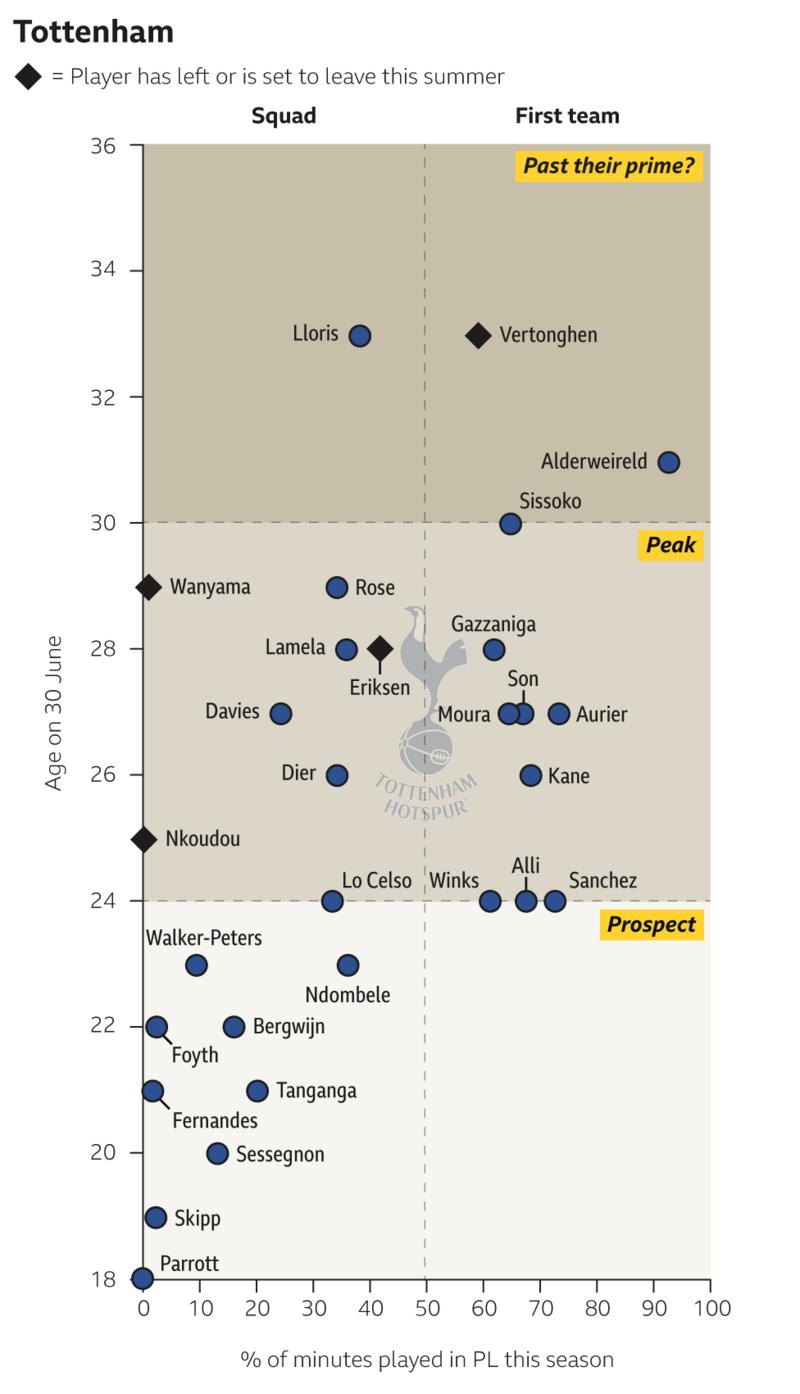 With Christian Eriksen already gone, Jan Vertonghen set to leave and Tanguy Ndombele reportedly unsettled, Jose Mourinho has a lot of work on his hands, although he does have a promising group of young prospects to work with.

Arsenal: Aubameyang on his way?

With his contract expiring next summer, Arsenal’s window will likely revolve around the future of Pierre-Emerick Aubameyang, who turns 31 next month and has scored 49 of the club’s 137 Premier League goals since joining two years ago. 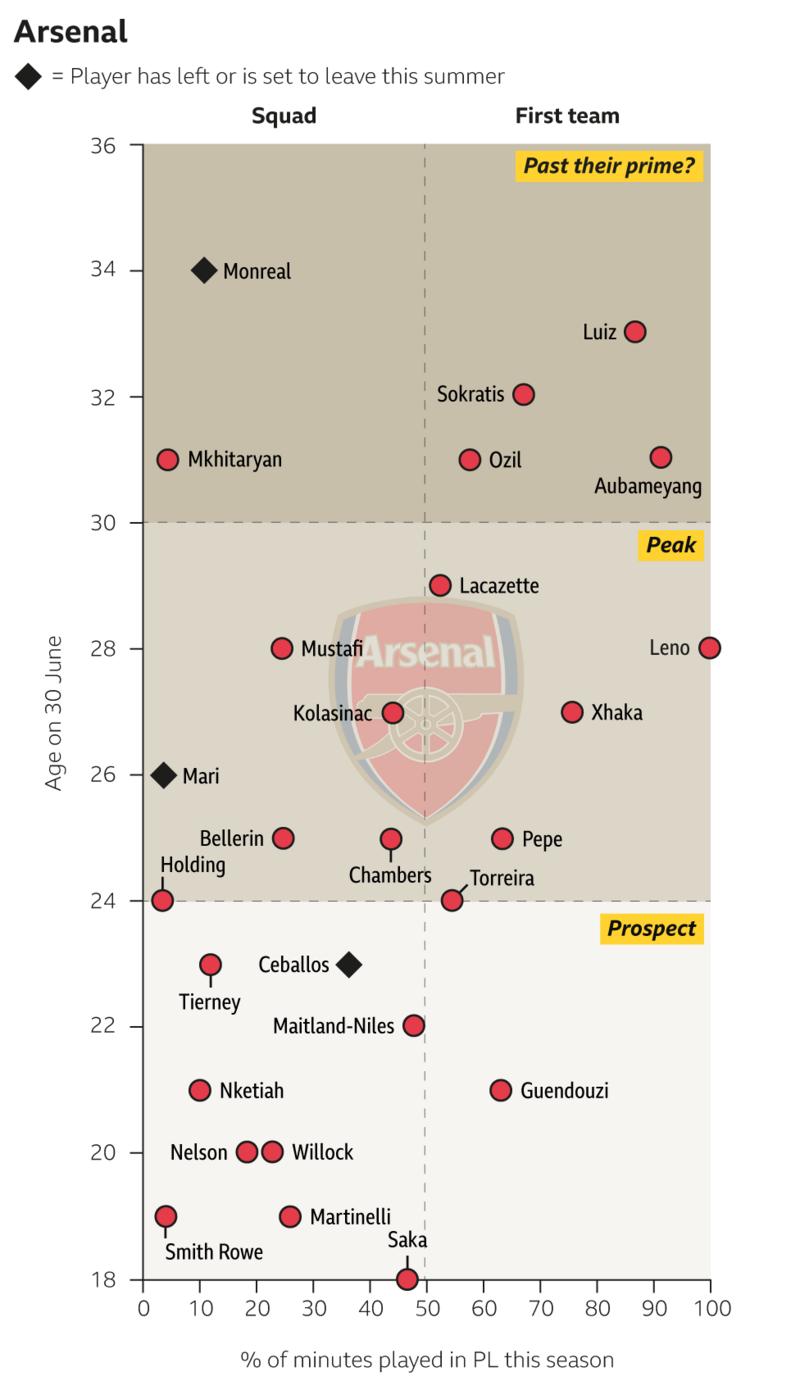 Decisions will also need to be made on whether to sign loan players Pablo Mari and Dani Ceballos permanently, with the latter reportedly valued at £44m by parent club Real Madrid.

Like arch-rivals Tottenham, the club do have a crop of exciting prospects for Mikel Arteta to develop, with Bukayo Saka and Eddie Nketiah impressing in recent months.

Burnley: What price is Dwight?

Sean Dyche’s main task could be keeping hold of young winger Dwight McNeil, with the 20-year-old the only hot prospect in an otherwise experienced squad. 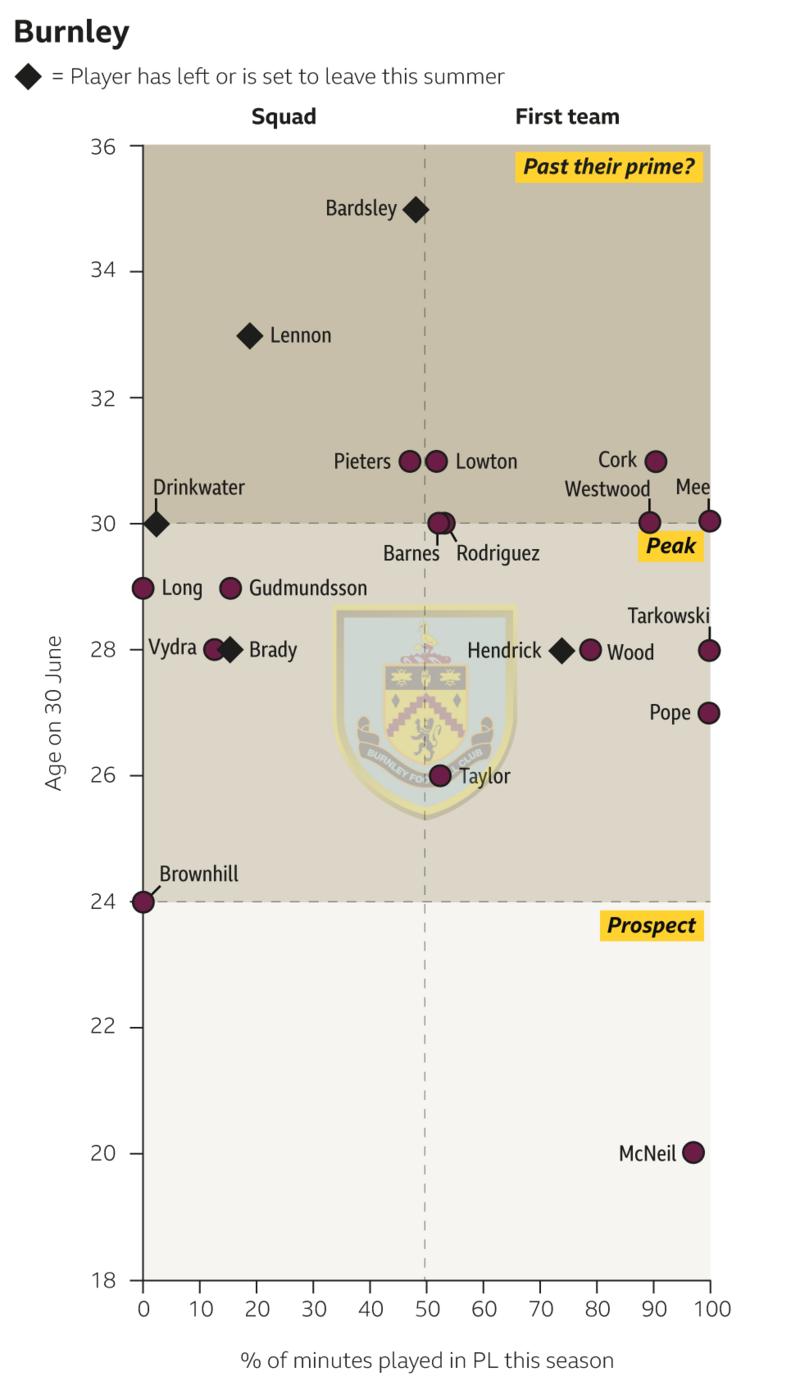 Recently linked with a move to Manchester United, he has played more minutes and been involved in more goals this season than any Premier League player yet to turn 21.

Even if he stays, the Clarets will need to sign some wingers, with Robbie Brady, Jeff Hendrick and Aaron Lennon all out of contract, although the club reportedly have the option to give Brady another year.

Coming up on Friday: The bottom 10 clubs