No lead was safe on Sunday, with several teams engineering huge second-half comebacks (yes, the Falcons collapsed again). There was a little of everything — there was even a tie! — and a week that was expected to be an appetizer for Monday night’s matchup between Kansas City and Baltimore proved to have plenty of its own entertainment value.

The bad version of Josh Allen still exists — but sometimes that’s OK. The Buffalo Bills raced to a huge lead thanks in large part to Allen, but the team’s defense — and the officials — let the Los Angeles Rams back into the game, and Allen showed some of his worst tendencies along the way. He threw an interception on an ill-advised throw (that should have been overruled by officials), he fumbled away another drive and he was constantly in trouble. On a memorable game-winning drive, however, he had a truly wild ride. He took a huge sack, was called for unsportsmanlike conduct when he face-masked a defender to avoid another sack, he managed to convert a third-and-22, and he threw incomplete on fourth-and-8 with less than a minute to play, seemingly ending the game. A pass interference call gave the Bills new life, and the good version of Allen suddenly reappeared, throwing a 3-yard touchdown pass to Tyler Kroft to win the game.

Allen has thrown for at least 300 yards in all three games this season after not doing it a single time over his first two seasons.

Russell Wilson might need his own cooking show. For years, fans of the Seahawks implored Coach Pete Carroll to “Let Russ Cook.” The conservative coach seems to have finally gotten the message, and Wilson is no longer being held back in a run-focused attack. He followed up last week’s five-touchdown performance against New England with another five against Dallas — including a 29-yard go-ahead score to D.K. Metcalf with 1:47 left in the game — and now has 14 in the first three weeks of the season, breaking Patrick Mahomes’s N.F.L. record of 13, which was set in 2018. 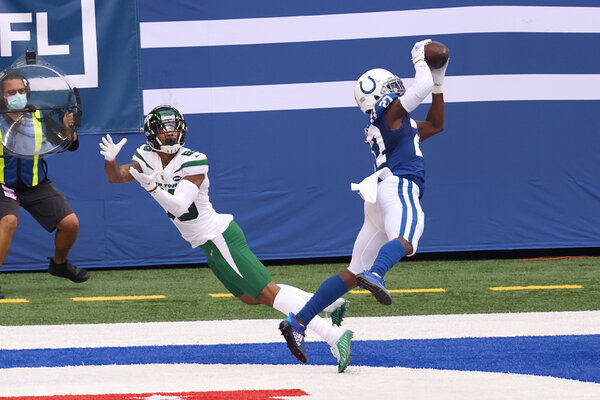 The Vikings needed Xavier Rhodes more than he needed them. Would one 30-year-old former All-Pro cornerback be enough to make Minnesota (102 points allowed in an 0-3 start) a relevant team? Probably not. But it’s hard to not be wistful for Vikings defenses of the past when Rhodes had a monster day for Indianapolis, pulling down two interceptions and returning one of them 44 yards for a touchdown.

You can lose a tie game. The standings will say the Philadelphia Eagles and the Cincinnati Bengals tied, 23-23, but it is hard to view it as anything less than a loss for the veteran-laden Eagles, who had multiple opportunities to put away Cincinnati and simply couldn’t. Carson Wentz threw two interceptions, Philadelphia’s defense allowed the rookie Joe Burrow to throw for more than 300 yards, and after the Eagles forced overtime, they were almost entirely lifeless, managing a total of 31 yards over three possessions. Two penalties on the team’s final try left them hopelessly out of field-goal range, and they punted the ball away, settling for a tie rather than risking a loss. Burrow and the Bengals can be satisfied with a tie; Wentz and the Eagles had to be fairly humiliated.

Mike Evans is nothing if not efficient. Tampa Bay’s supersize wide receiver had a line for the ages: 2-2-2 (two catches for 2 yards and two touchdowns). He’s the third player since 1950 to have such a day, according to Pro Football Reference, joining Lee Folkins of the Cowboys, who did it in 1963, and Howard Cross of the Giants, who did it in 1994. Evans’s efficiency helped power Tom Brady’s best passing game (297 yards, three touchdowns, no interceptions) since Week 1 of last season.

The N.F.L. should consider relegation. The 49ers were playing without their starters at quarterback, running back, wide receiver, tight end and center, and their defense was missing two defensive ends and its top cornerback. Led by the forgettable trio of quarterback Nick Mullens, the third-string running back Jerick McKinnon and the rookie wide receiver Brandon Aiyuk, the 49ers somehow beat the Saquon Barkley-less Giants, 36-9, on the road. San Francisco just might get through this injury mess unscathed thanks to a remarkably soft schedule. After wins over the Jets and the Giants, the 49ers face the struggling Eagles and the middling Dolphins. The Giants, on the other hand, appear to be hapless, and despite its being just Week 3, they are a strong contender for ending up with the N.F.L.’s worst record.