TAMPA, Fla. — It was a game billed as the GOAT going up against the Baby GOAT, but Tom Brady reminded Patrick Mahomes exactly why people consider him the greatest of all time. He led the Tampa Bay Buccaneers to a 31-9 upset of the Kansas City Chiefs in the Super Bowl on Sunday and captured the seventh N.F.L. championship of his 21-year career. 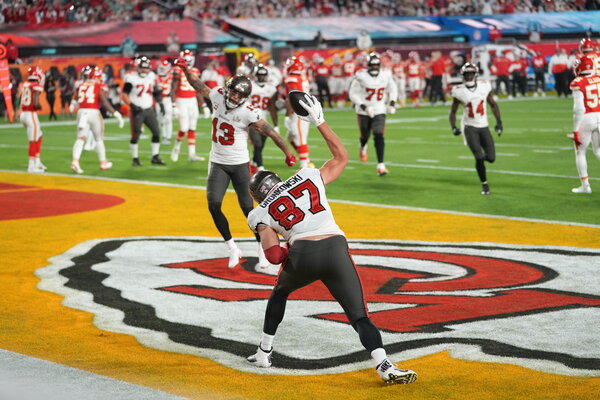 Tom Brady knows what, and who, he needs. Brady persuaded tight end Rob Gronkowski to come out of retirement to join him in Tampa, and he lobbied for the Buccaneers to sign wide receiver Antonio Brown, even after Coach Bruce Arians said the team wasn’t interested. Despite the presence of the Pro Bowl wide receivers Chris Godwin and Mike Evans, Gronkowski and Brown did all the scoring in the first half on Sunday, combining for three touchdowns. Tampa Bay didn’t score another passing touchdown in the second half, but Brady and his pals had officially set the tone for Tampa Bay’s upset.

The two Brady-to-Gronkowski touchdowns gave the connection 14 in N.F.L. playoff games, which broke a tie with Joe Montana and Jerry Rice of the San Francisco 49ers, who had 12. Brady, who at 43 was the oldest player to appear in a Super Bowl, now has 3,039 yards passing in 10 career Super Bowl appearances — a good regular season for most players — and his 125.9 passer rating on Sunday was his best mark in any of the 10 games.

If you include the years before the Super Bowl existed, Brady’s win on Sunday broke a tie with three players for the most N.F.L. championships by any player. The other three to win six were Fred Thurston, an offensive lineman known as Fuzzy who won his with the Baltimore Colts and the Green Bay Packers; Forrest Gregg, an offensive lineman who won them for the Packers and the Dallas Cowboys; and Herb Adderley, a defensive back who also won his with the Packers and the Cowboys.

Charles Haley, a standout defensive lineman for the 49ers and Cowboys, is the only player besides Brady who has won five Super Bowls.

Patrick Mahomes is human after all. Mahomes, the Chiefs quarterback, has come back from large deficits so many times — particularly in the postseason — that it felt inevitable that he would do so again. But he was forced to rush through his progressions all game and his receivers couldn’t adjust to his less-than-perfect throws. Tampa Bay’s aggressive young defensive backs held tight in coverage, allowing Mahomes few opportunities to improvise, and Kansas City’s offense was a shell of itself.

Mahomes completed just 53.1 percent of his passes — the fourth-worst mark of his career, including regular-season and playoff games. He threw two interceptions and hadn’t surpassed 100 yards passing until the final minute of the third quarter.

Not everything shows up on a stat sheet. The combination of Tampa Bay’s incredible pass rush and Kansas City’s injury-depleted offensive line led to Mahomes’s having to scramble all game. The official statistics show only three sacks and eight quarterback hits, but the Buccaneers’ plan was to rush just four defenders, and that tight group kept Mahomes on his heels while also leaving enough defenders in coverage to blanket Kansas City’s receivers. Jason Pierre-Paul and Shaquil Barrett combined for just four tackles, and Barrett was limited to one sack, but there is no doubt that those bookend outside linebackers were a huge reason the Buccaneers won.

Home field advantage existed again, at least for a day. The Buccaneers were the first team to play a Super Bowl in their home stadium, and even with a crowd that was limited to roughly one-third of Raymond James Stadium’s capacity, the energy was clearly on their side. Big plays for Tampa Bay resulted in huge cheers, and noise levels were quiet enough otherwise that Mahomes could likely hear some of the taunts being hurled his way as he struggled for much of the game.

The lack of crowds during the season led to home field advantage being largely negated — a trend noted in the betting lines — but on Sunday it was fairly easy to give Tampa Bay fans an assist in a surprising victory.

There is a better way to do a halftime show. The Weeknd put on an exciting performance that seemed well received, and — largely as a result of pandemic-related adjustments — he did it without disturbing the stadium’s field. In a typical year, large stages have to be constructed on the turf right as the second quarter ends, and a crowd of fans is rushed out to cheer for the performer. Instead, a stage had been set up above one of the end zones in advance of the game and the performance simply began at the scheduled time. It required almost no cleanup after the act and allowed the teams to get back onto the field to warm up quickly. The league will undoubtedly go back to the full-stadium spectacle in the future, but this year proved a great show could be done without the fuss.

You can give fans masks, but you can’t make them wear them. The N.F.L. gave KN95 masks to every fan in attendance, and required that a mask of some sort be worn at all times, except when eating or drinking. Despite having volunteers roaming around with signs reminding fans about the rule, the wearing of masks, and the social distancing, began to fade shortly after the game started. The crowd was sparse enough that it didn’t turn into a truly disturbing scene, but the message was fairly clear that if stadiums reopen, fans are going to act like fans.

The Records Set and Tied at Super Bowl LV

As it does every season, the N.F.L. provided a list of records set and tied at this year’s Super Bowl.