The 2020 Tokyo Olympics, one of the premier events on this year's sports calendar, were supposed to kick off July 24.

Now, we know — officially — that will not happen.

Amid uncertainty related to the coronavirus pandemic, the International Olympic Committee and Japanese government officially moved Tuesday to postpone the Games — an unprecedented decision that will have complex, and far-reaching, ramifications for athletes, coaches, sponsors and the Japanese economy, among other key "stakeholders," as IOC president Thomas Bach calls them.

Japanese Prime Minister Shinzo Abe's office said on social media that the Games will be held "by the summer of 2021."

It will likely take weeks to sift through all of the ramifications of this change. But in the meantime, here's a quick look at what a summer without the Olympics will mean for all of the parties involved.

HERCULEAN EFFORT: What does it take to move the Olympics?

What does this mean for athletes?

According to the IOC, more than 6,000 athletes from around the world had already qualified for these Games. Thousands more were still hoping to clinch a spot in the coming months.

For many of them, this news will be devastating.

Though there's been a growing sentiment among athletes in recent weeks it wouldn't be safe to hold the Tokyo Olympics as scheduled, the reality of posponement is still difficult to stomach. Remember that Olympic athletes quite literally construct their lives around the Games calendar. The daily training regimens are intense. Other endeavors, like college degrees, are often put on the backburner. It's a commitment of time and energy over a span of four years, not a few months.

"As an Olympic athlete, you live your life in (four-year) cycles," wrestler Jordan Burroughs said last summer. "Everything we do is cyclical."

Now those athletes, who had carefully crafted training programs to peak in July, must go back to the drawing board if they want to take another crack at it, likely one year from now. Some may choose not to. Bach, for example, likely would have won a second gold medal in fencing at the 1980 Games before boycotts derailed that plan. He retired shortly thereafter, at the age of 27.

SPORTS & CORONAVIRUS: Making the most of our time without sports. Sign up to join us!

How will this impact Olympic qualification?

Before the coronavirus outbreak, about 57% of Olympic spots had been clinched, according to the IOC. Are those athletes now automatically qualified for next year's Games? Or do they have to re-earn their spots?

In the event of postponement, I want every athlete that has earned their spot to be locked into it," U.S. weightlifter and Olympic qualifier Katherine Nye wrote on Twitter. "We have earned our spots and I don’t even want to THINK about them being taken away."

As for the other 47%, what does the qualification process look like moving forward? Is it as simple as rescheduling events like the larger U.S. Olympic trials in sports such as wrestling, swimming, track and field and gymnastics to this winter or next spring and calling it a day?

How will this impact the global sports calendar?

There are 33 sports that make up the Summer Olympics, which means there are 33 international sports federations that must now adapt to the new timing of the Games.

In some sports, this will be simpler than others. The track and field world championships, for example, were scheduled to take place in August of 2021. If the Games are held over the same dates, those would presumably be canceled or moved, and athletes would simply compete at the Olympics instead.

World Athletics, the sport's international governing body, has already indicated it is open to the possibility of rescheduling its event around the Games.

In sports like soccer, however, the calendar is already plenty crowded — both with international competitions, and the schedules of major pro leagues — and rescheduling could prove daunting.

What are the financial implications of this decision?

The IOC has insurance to guard against potential disruptions to the Games, and about $2 billion in reserve to keep itself (and its membership) afloat until its next big payday.

NBC, which owns the American broadcasting rights, also has insurance. The company is in the sixth-year of a $7.75 billion deal with the IOC, which will run through 2032. The IOC's top sponsors, such as P&G and Visa, also pay millions for the right to be associated with the Games. 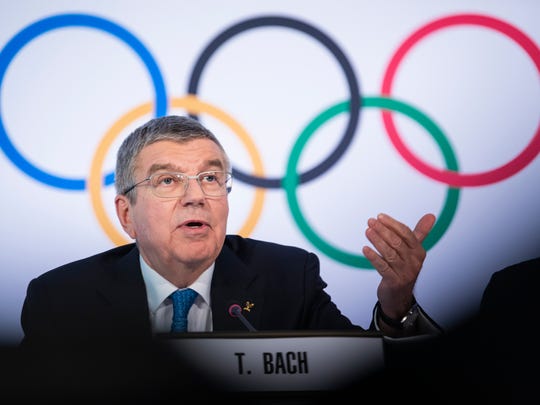 The Japanese economy, already hurting by a drop in tourism this spring, will probably take the biggest hit, from a financial standpoint. The country spent about $28 billion to host these Games, according to The Associated Press, and it was anticipating an economic uptick in return, with spectators flying in from around the world and spending money at hotels, restaurants, etc.

Now, all of that revenue — at least for 2020 — is gone. And some of the money that the local government had already spent to host the Games this summer might be needed in 2021, to do it all over again.

Could the Olympics still ultimately be canceled?

Though the IOC and Japanese government have explicitly ruled out a cancellation, there remains a chance that the logistical hurdles could prove insurmountable in the coming months.

The Olympics are one of the largest events in the world, sports or not, and as such, there are an incredible amount of moving parts involved. Venues need to be maintained. Contractors need to be re-hired. Hundreds of contracts need to be reworked.

The IOC and Japanese government are obviously confident that those obstacles can be overcome, and their decision to postpone is evidence of that. But actually overcoming them is something different.

Will this decision impact the 2022 Winter Games?

In all likelihood, no. The IOC has never offered any indications that the Summer Games will impact the Winter Games, which are scheduled to start in February 2022 in Beijing.