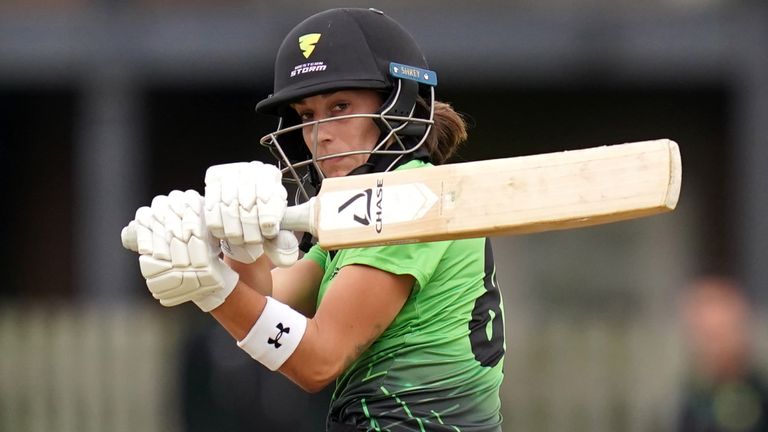 Western Storm clinched a nine-wicket win over Thunder on DLS in their rain-disrupted Charlotte Edwards Cup clash as Fi Morris starred with bat and ball.

The heavens opened one over into Storm’s chase after Thunder had posted 110-8 from their 20 overs and, when play resumed almost two hours later, Storm were set an adjusted target of 33 after five overs.

Morris followed a double-wicket maiden in the Thunder innings with 19 off eight balls as she broke the back of the chase by striking four boundaries off Sophia Turner’s first over to take Storm to 21-0.

Morris was stumped by Ellie Threlkeld off Emma Lamb, with Georgia Hennessey (11no) and Danielle Gibson (4) guiding Storm to their reduced target with 11 balls to spare, giving the side their first win and handing Thunder their first defeat.

Lamb had looked set to continue her fine form with the bat as she made a quick-fire 21 to lead Thunder’s recovery after the early loss of Georgie Boyce (2) to a brilliant catch from Gibson.

But Lamb fell to Lauren Parfitt (2-15) from the final ball of the powerplay to leave Thunder 40-2.

Piepa Cleary (13) and Threlkeld (12) looked well set but then fell as Storm took control thanks to a double-wicket maiden from Morris (2-21).

Thunder slipped to 61-5 when Daisy Mullan (2) was bowled by Gibson (2-23) and the hosts were struggling to post a competitive total.

Thunder make 110-8 from their 20 overs against @_WesternStorm

Laura Marshall (19) and Laura Jackson (12) counter-attacked with a brisk 26-run stand, punctuated by a number of well-timed shots down the ground.

But Storm keeper Nat Wraith produced an excellent catch to dismiss Jackson and then stumped Danielle Collins (3), while Marshall fell in the final over.

Thunder are next in action at Emirates Old Trafford on Friday against Sunrisers, with Storm at home to Diamonds in Taunton next Saturday.