Josh Hazlewood feels the Australian team is earning back trust with the public after the gargantuan public relations hit of the ball-tampering affair.

And the paceman, who ascended to the Test vice-captaincy in the wake of the suspensions to Steve Smith and David Warner, says he is keen to maintain a leadership position even when Smith returns to the fold. 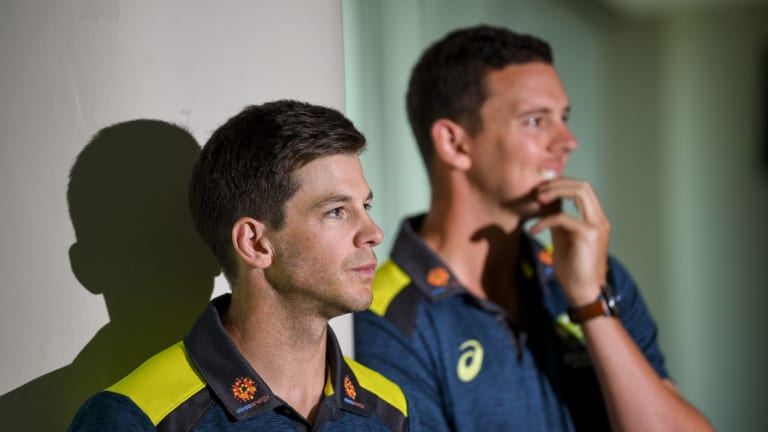 The fallout from the events of Cape Town in March this year is well-documented, with a host of senior Cricket Australia officials departing their posts either side of the release of the Simon Longstaff review, which was commissioned by CA following the emergence of a plot to sandpaper the ball during the third Test of South Africa. Warner, Smith and Cameron Bancroft were all suspended for their involvement.

The Australian team has since affirmed a commitment to play hard but fair, and captain Tim Paine has won praise for the way he has managed to balance playing tough yet honourable cricket, in particular for the way he handled a run-in with Indian skipper Virat Kohli during the second Test.

Hazlewood said he thought the on-field atmosphere during the series had struck the right note.

“I think it’s been really good. When you’re playing against India and these top teams, the pressure’s always there, and it’s always a big session or a big hour,” Hazlewood told The Age.

“I think it’s been great. I think there’s been some good feedback from the public and all the viewers. It’s been high-quality Test cricket. It’s been due to the wickets I think. It’s been quite competitive between bat and ball. Hopefully that continues here.”

He agreed the team was winning back the trust of the masses.

“We’ve changed little things. The way we handle ourselves on the field and off it. But I think just everyone’s going in the one direction now. The players and staff and everyone at CA. I think we’re heading in the right direction.”

Bancroft’s ban is only days away from ending, while Warner and Smith will both be eligible to play again from late March. Warner won’t be allowed to hold a leadership position within the team again, although Smith could, but not until 2020, pursuant to the terms of his ban.

Hazlewood and Mitchell Marsh were named joint Test vice-captains behind Paine ahead of the Test tour of the United Arab Emirates three months ago, although Marsh has subsequently lost his place in the XI and can be considered no more than a fringe player at present.

Hazlewood has previously said he doesn’t harbour ambitions to captain the side one day, but is keen to continue in some sort of leadership role even when Smith comes back.

“I think things are going well with 'Painey' as captain. There’s quite a lot of inexperienced guys around the team at the moment.”

Hazlewood said he had watched some of Smith’s press conference late last week and remains in touch with the suspended skipper.

“[I’ve spoken to Smith] a little bit from time to time over the past couple of months. He seems to be getting better and better every time I talk to him. He’s fine.”