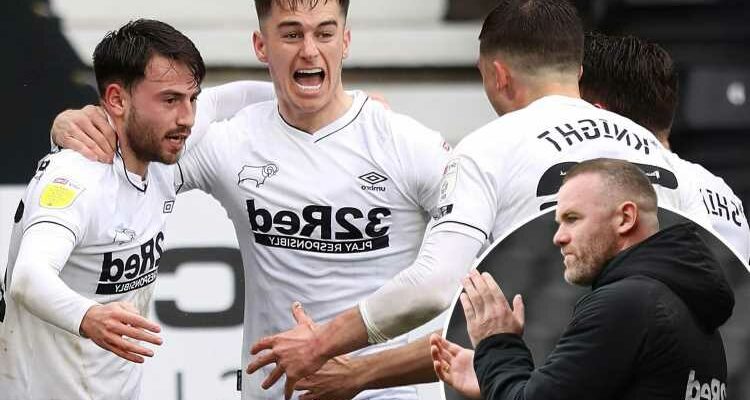 WAYNE ROONEY was spared the humiliation of relegation to League One as Derby snatched a draw to send Sheffield Wednesday down.

In an incredible rollercoaster of an afternoon which saw first the Owls move in front, then Derby turned it the game on its head to lead 2-1 only for Wednesday then to score twice to move 3-2 in front. 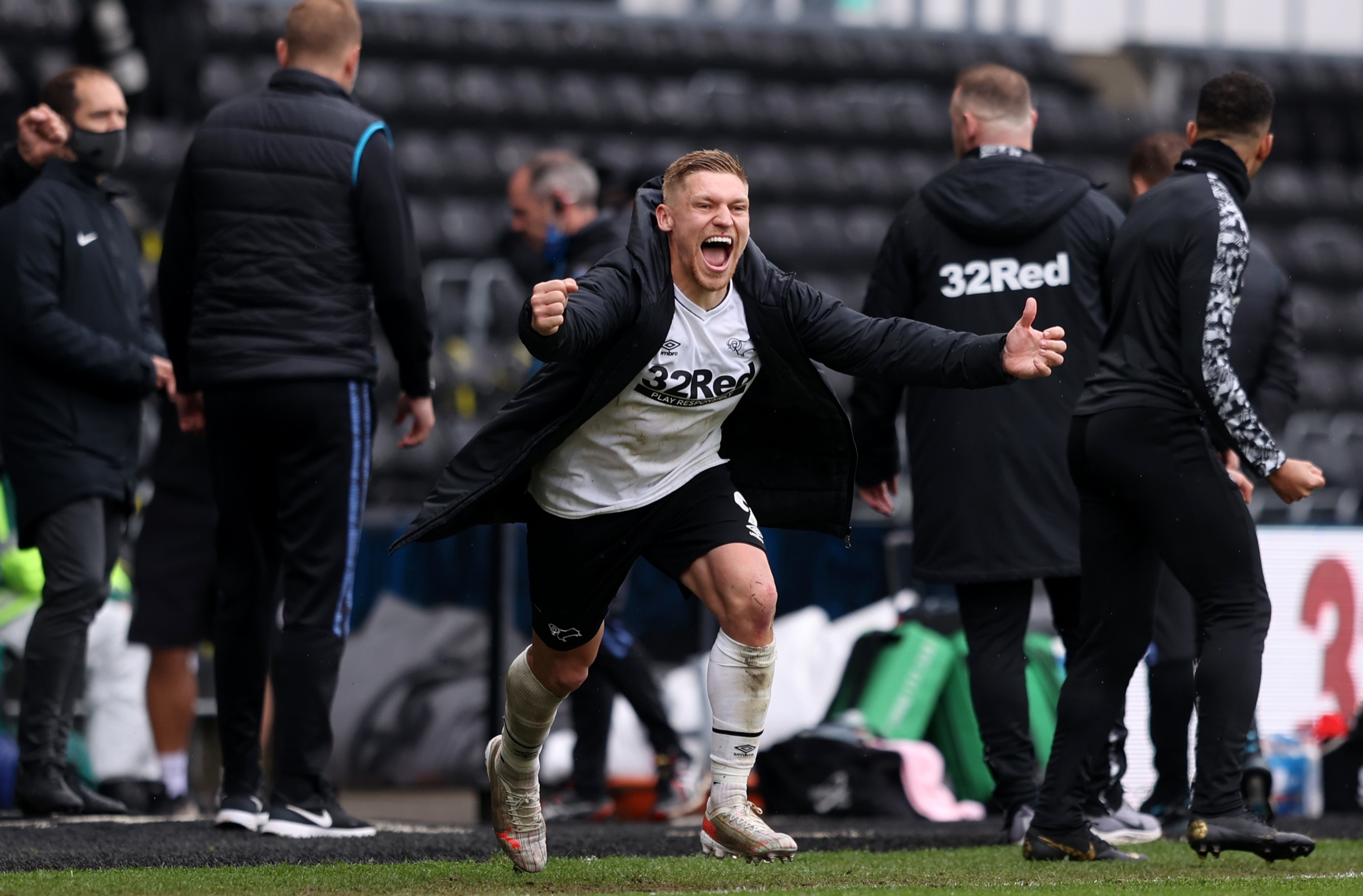 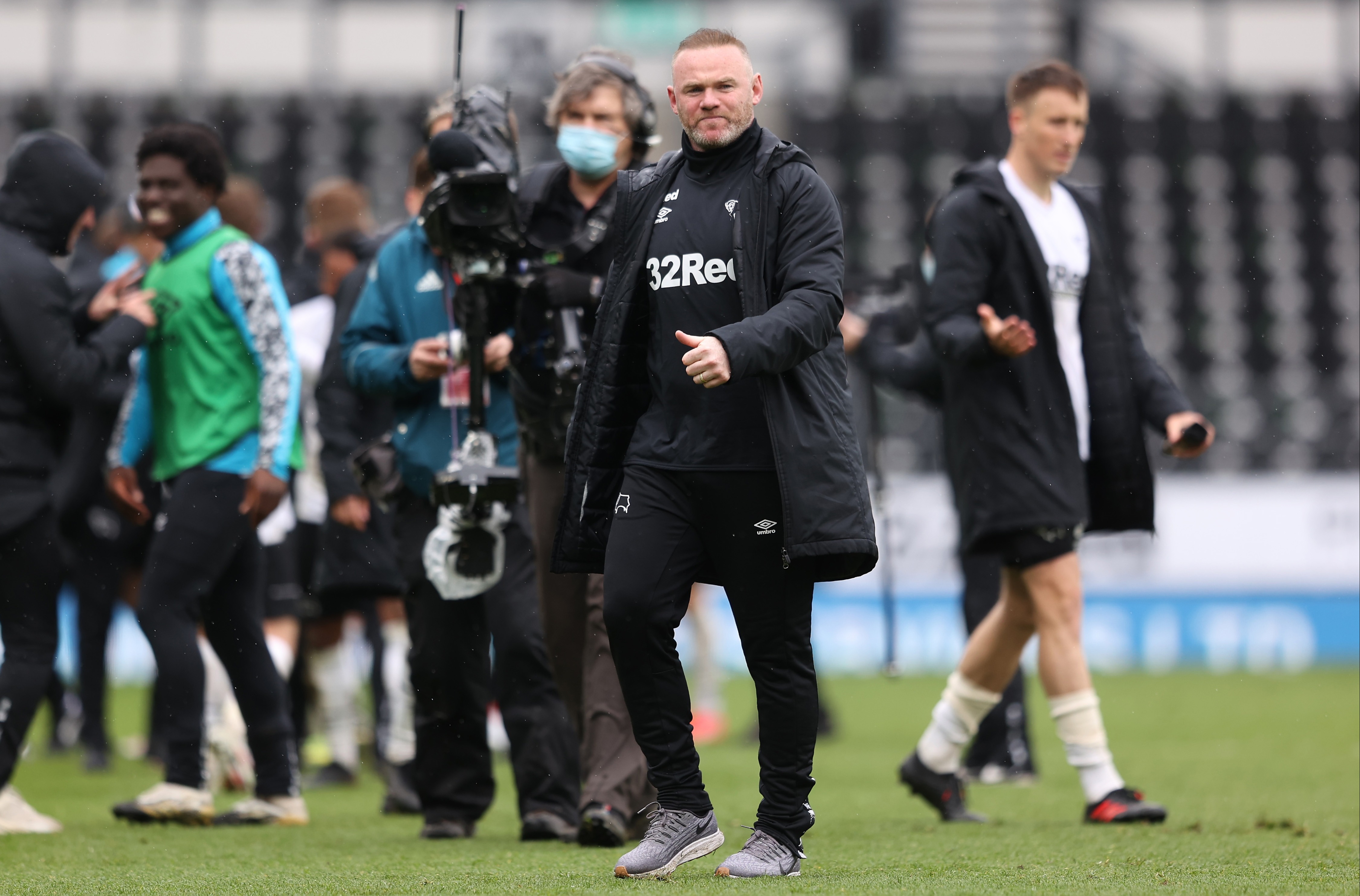 But then referee Mike Dean awarded Derby with 12 minutes left to save Rooney his Championship bacon after Kami Jozwiak was fouled.

News filtered through that Cardiff had levelled against Rotherham – relegating the Millers with still 15 minutes left at Pride Park.

Wednesday threw the kitchen sink in a dramatic finale but Derby held firm.

The Rams had one foot in League One when Sam Hutchinson put Wednesday in front on the stroke of half-time after a first 45 minutes of virtually no quality.

Rooney would have had plenty to say in the dressing room at the break and sent his team out early.

And Derby turned the game on its head within seven minutes.

First Waghorn headed them level in the 49th-minute and then Patrick Roberts put the Rams in front with a superbly-hit 52nd-minute effort. 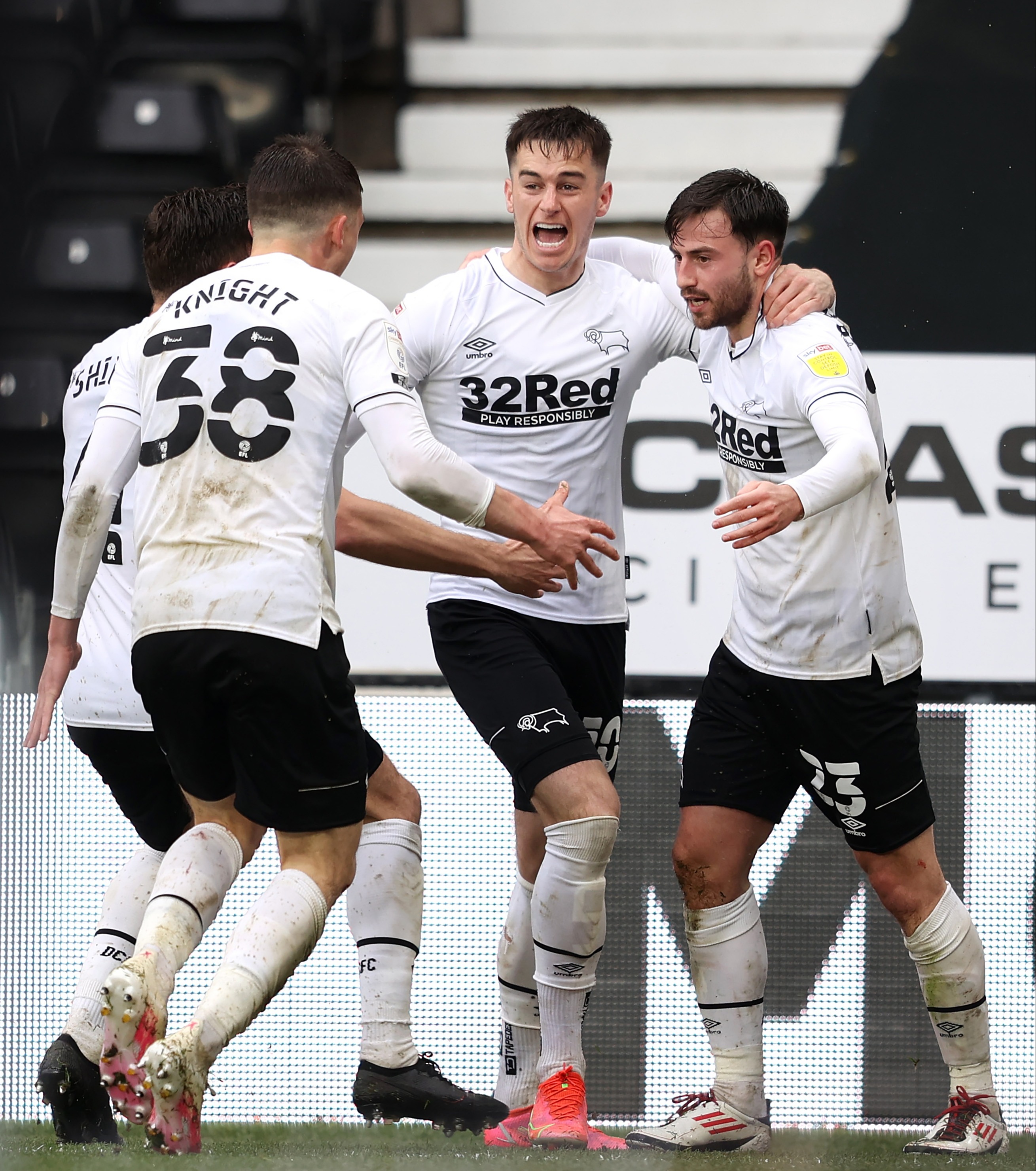 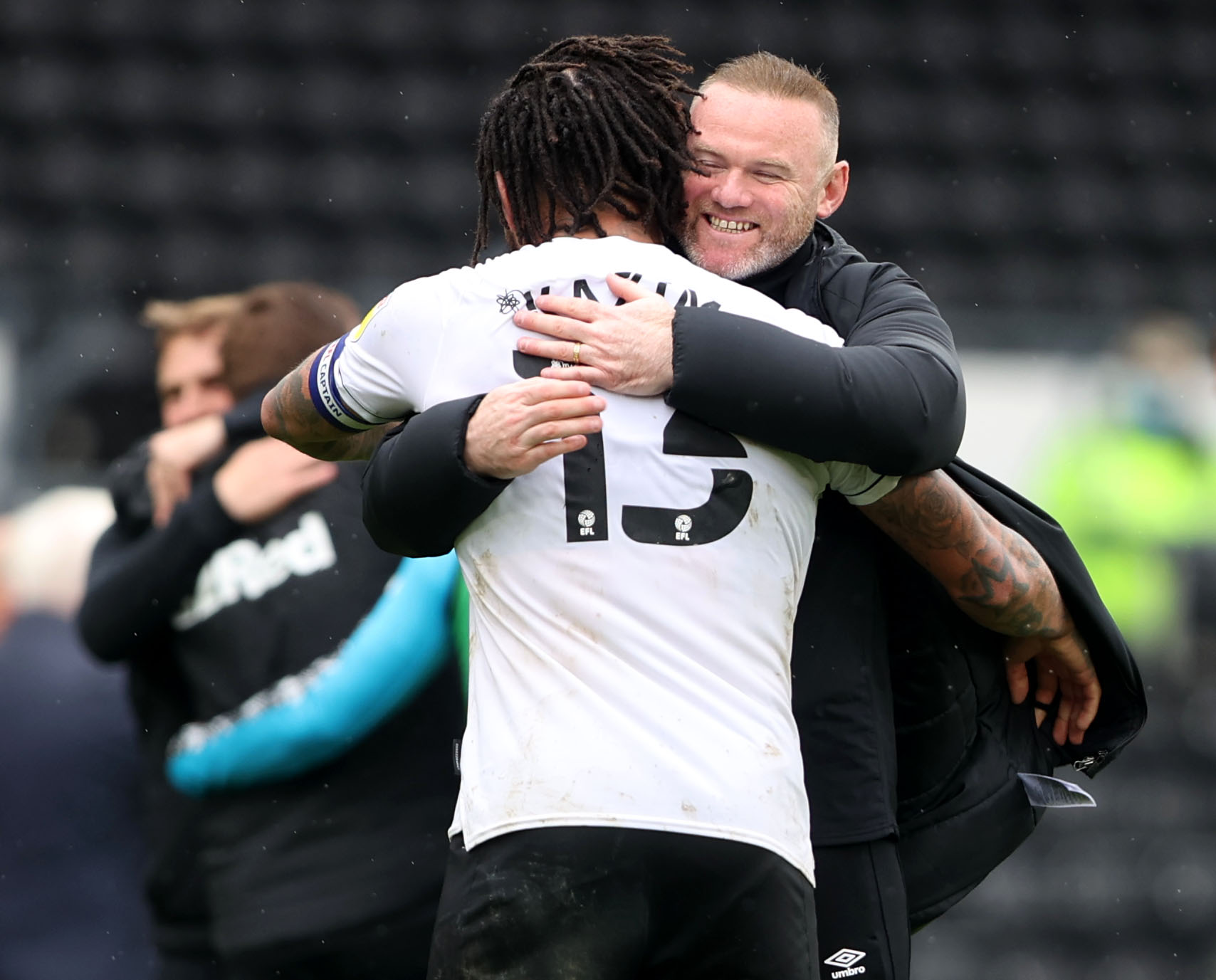 Yet – just as Derby had all the momentum – Wednesday themselves turned the game upside down in another seven-minute burst.

Callum Patterson cashed in on a Craig Forsyth howler to level in the 62nd.

But you just could not take your eyes off this game and with 12 minutes left when sub Kamil Jozwiak was hacked down in the box – and Waghorn slammed home the penalty.

Roberts burst through for a one-on-one with Westwood but incredibly the Wednesday keeper saved.

It was no surprise these two big clubs ended up in this position on the final day.

Sheffield Wednesday owner Dejphon Chansiri has been a complete basket-case – and disaster since he took charge at Hillsborough in 2015.

He has gone through seven managers – and three this season! 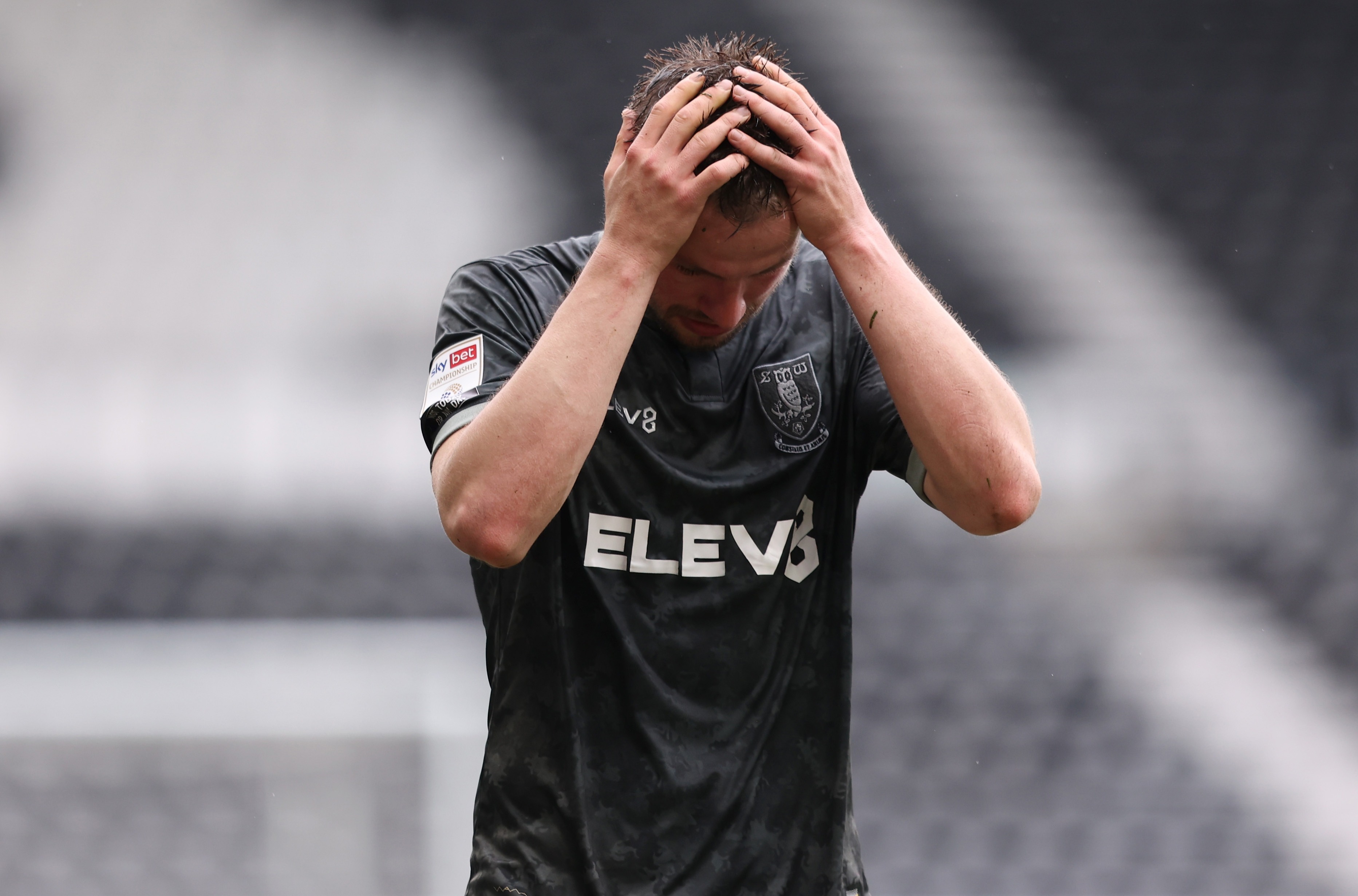 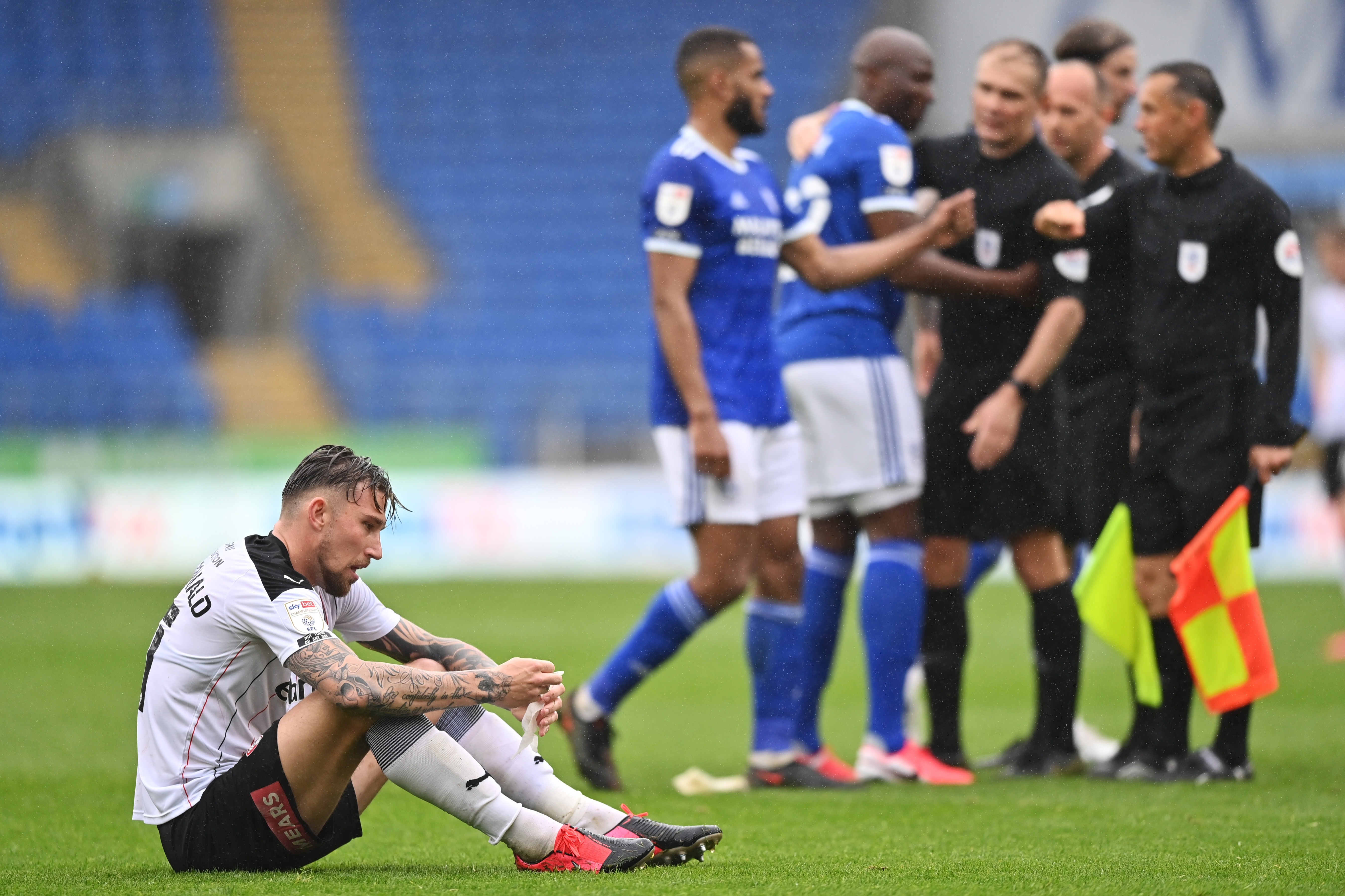 Gary Monk was sent packing. Then the bizarre dismissal of Tony Pulis after 46 days followed.

And the Owls limped along without a manager for two months before Darren Moore decided to quit Doncaster to take up the reins.

They were unlucky with Moore contracting Covid-19 and then suffering pneumonia complications which have kept him out of the dugout.

But the popular coach was back yesterday and stood in the technical area.

The 12 points deduction – later reduced to six points – for breaking financial fair play rules put them on the back-foot this season.

Derby – on the other hand – are up to their eyes in debt with owner Mel Morris desperately trying to get rid of the club to Spanish businessman Erik Alonso.

Rooney had taken the club from bottom of the table when he took over from Phillip Cocu in November six points adrift of safety.

He managed to pull them eight points clear but one win in 14 and
six straight defeats saw them just two points ahead of Rotherham and three ahead of Wednesday but with a worse goal difference than both.

Wednesday ace Paterson was clattered down by Jason Knight early on and the game was stop-start as both sides gave away lots of free-kicks.

News filtered through that Lewis Wing has fired Rotherham in front at Cardiff – meaning both clubs after seven minutes found themselves in the bottom three.

And, second after that sank in, Barry Bannan – who really is a class act – hammered a shot inches wide.

Derby should have moved in front in the 10th minute.

Nathan Bryne’s corner from the left was met by a bullet header from Waghorn but the ball went wide while the Rams ace collided with the far post.

The striker needed lengthy treatment – which delayed the game for around five minutes – but dusted himself off to continue.

Both sides were lacking any meaningful quality in the final third in the first half.

Adam Reach will have been disappointed with a wayward effort from 25 yards that cleared the bar.

Then Derby thought they were in front when Roberts unleashed a shot from 25 yards, which was too hot to handle for keeper Westwood.

Colin Kazim-Richards was on to in a flash to fire the loose ball into the empty net.

The Pride Park stadium announcer played goal celebration music over the address system – but the referee assistant had his flag raised as Kazim-Richards was in an offside position.

There were jitters when Westwood flapped at an up-and-under when it was an easy header for Roberts.

And almost on the stroke of half-time, Wednesday went in front. 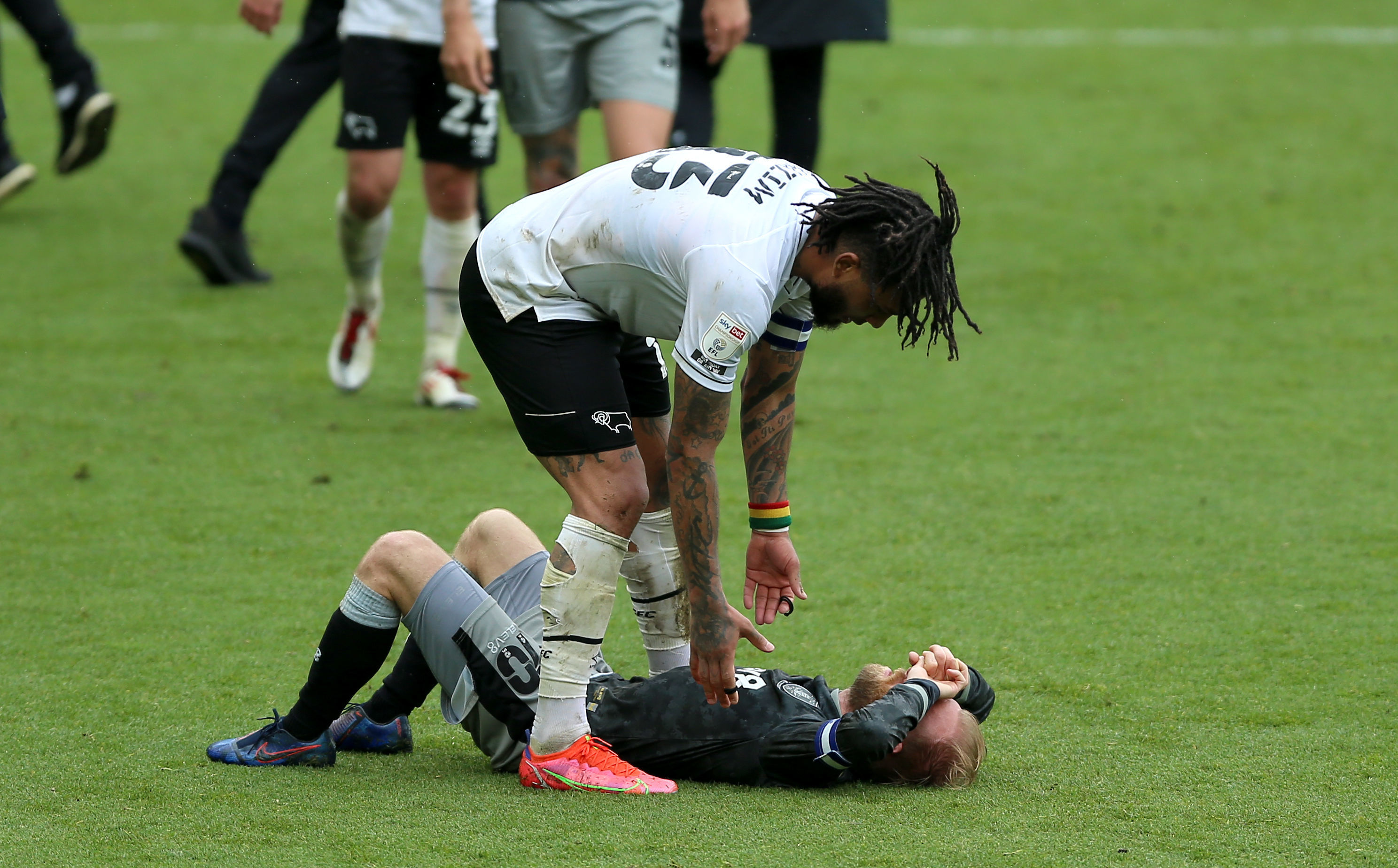 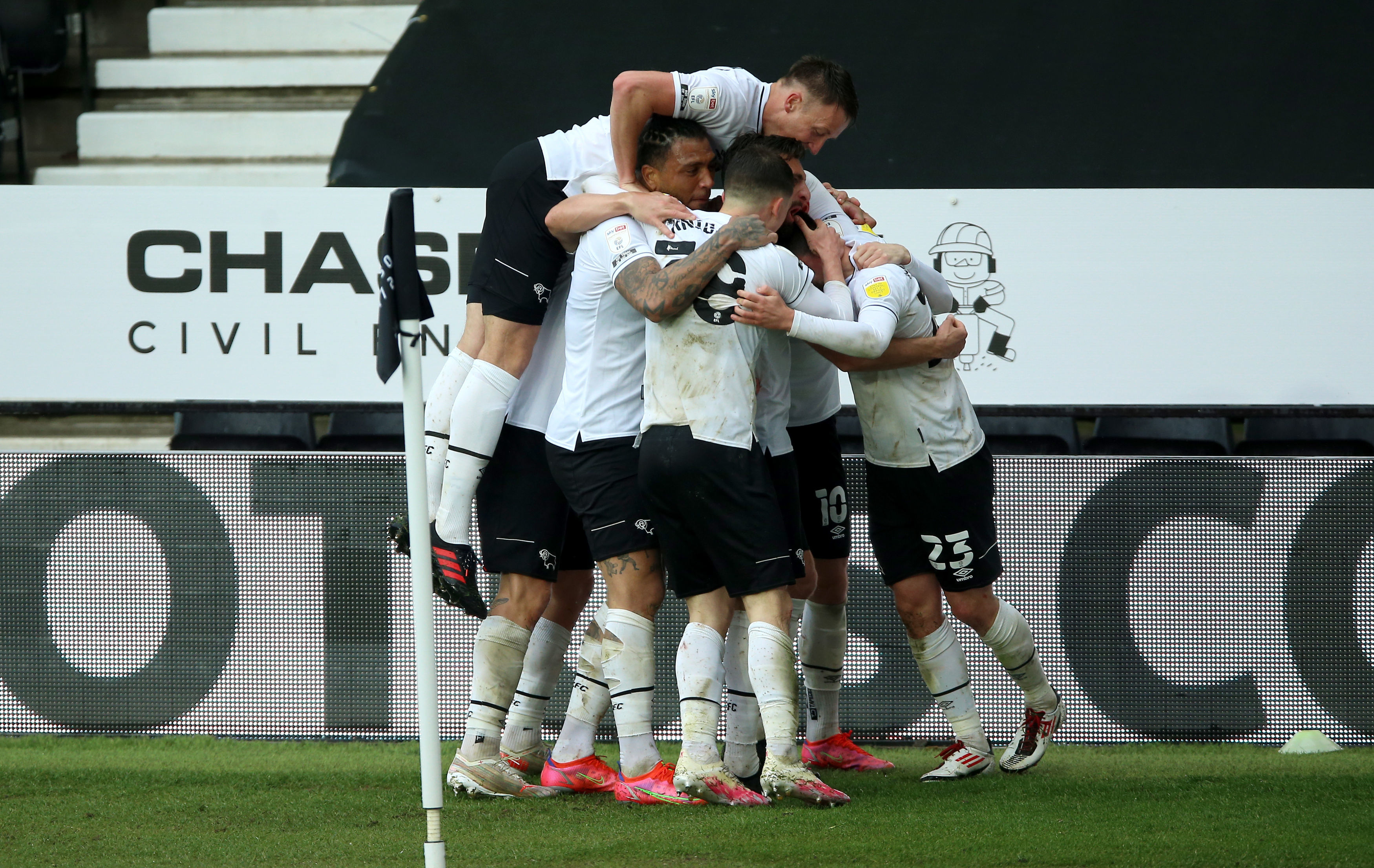 Paterson launched a long throw into the Rams' box. Derby’s Forsyth was only able to flick it back for Jordan Rhodes to head goalwards.

Kelle Roos made a superb one-handed save to keep it out but the ball fell to Hutchinson to fire home.

As the teams went in at the break, Rooney will have been preparing for the biggest half-time team talk of his managerial career.

And he could not have got a better response as the Rams levelled within three minutes of the restart with their first piece of real quality.

Tom Lawrence whipped over a lovely cross from the left for Waghorn to plant a lovely header beyond Westwood.

And, remarkably, the Rams were in front and it was a classic route-one effort.

Roos launched the ball up field, Kazim-Richard won the flick-on and Waghorn laid a pass to Roberts.

He strode forward and smashed a brilliant low effort past Westwood.

Regardless of Rotherham’s 1-0 lead, they were now down with Sheffield Wednesday.

But in an afternoon of incredible twists and turns Wednesday levelled in the 62nd minute after a clanger from Forsyth.

Reach lobbed a ball into the box for Rhodes to flick on and Forsyth had the simple task to clear.

But his touch was so awful, the ball fell to Paterson to fire home.

And in a remarkable turnaround the Owls moved in front.

Bannan’s corner was only flicked back to beyond the far post by Kazim-Richards.

Forsyth got out-muscled by Chey Dunkley to head into the path for Borner to nod into an empty net.

But Mean pointed to the spot after Jozwiak went down in the box under the challenge of both Borner and Dunkley.

Waghorn made no mistake from the spot – and then news filtered through that Cardiff had levelled against Rotherham, meaning the Rams were safe.

Roberts should have made the points safe but was denied before a nervy late spell which saw the Rams stand firm.