Ken Goldin of Goldin Auctions on sports memorabilia on the auction block.

Even in retirement, Wayne Gretzky can still set records.

The Great One’s 1979 O-Pee-Chee rookie card sold for $1.29 million Thursday night, setting a record for the most expensive hockey card ever. It was the sixth card to sell for $1 million or more.

The card is graded a Gem Mint 10 by PSA and there’s only two of its kind in the world.

The card sold at Heritage Auctions. 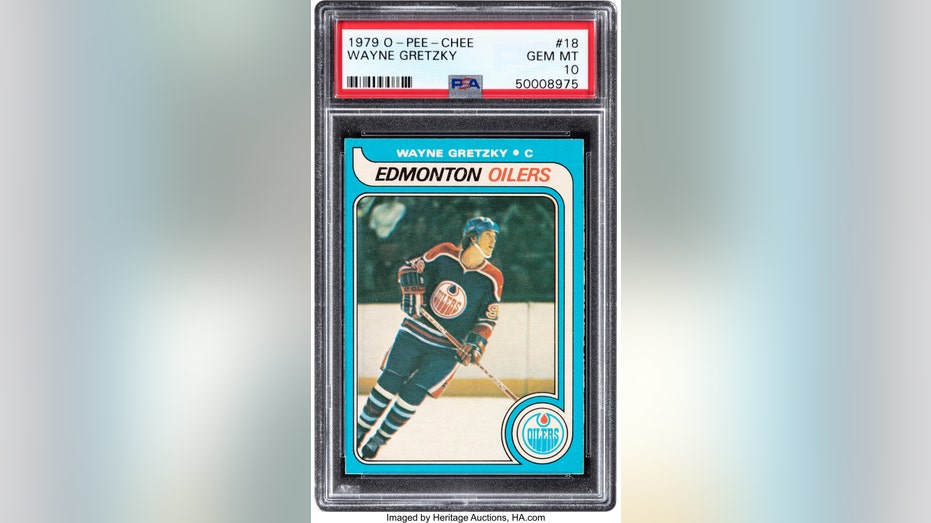 There’s only two cards of this kind in the world. (Heritage Auctions)

“Having recently passed its fortieth birthday, the Wayne Gretzky rookie finds itself balanced between the venerable old and spanking new, though we're still inclined to carve its likeness into the Mount Rushmore of the modern era,” the description on the auction website reads.

“Its status as the most recognizable hockey card in the hobby is uncontested, though it could hardly be characterized as ubiquitous, particularly in the listed format produced in Gretzky's native Canada. [Michael] Jordan rookies outnumber the Gretzky by a factor of three-to-one in the full population, and the divide explodes to cavernous dimensions at the top of the grading spectrum. At the time this text is written, the PSA website indicates a population of 316 Gem Mint 10 examples of the Fleer Jordan rookie, while the offered Gretzky card is one of only two to achieve that top-tier assessment.”

Heritage says there’s only two highly graded Gretzky cards in the world and the production of the card is mainly to blame. Cards originally distributed by O-Pee-Chee were cut using wire instead of blades, creating rough edges.

Gretzky played for the Edmonton Oilers from 1978 to 1988 before he was traded to the Los Angeles Kings.