WATFORD’S agonising wait for a first Premier League win goes on but at least Ben Foster earned a small measure of personal redemption.

Last weekend the Watford goalkeeper made a hash of a routine Tottenham delivery, colliding into his own player instead before Spurs star Dele Alli took advantage with minutes left to score a contentious equaliser. 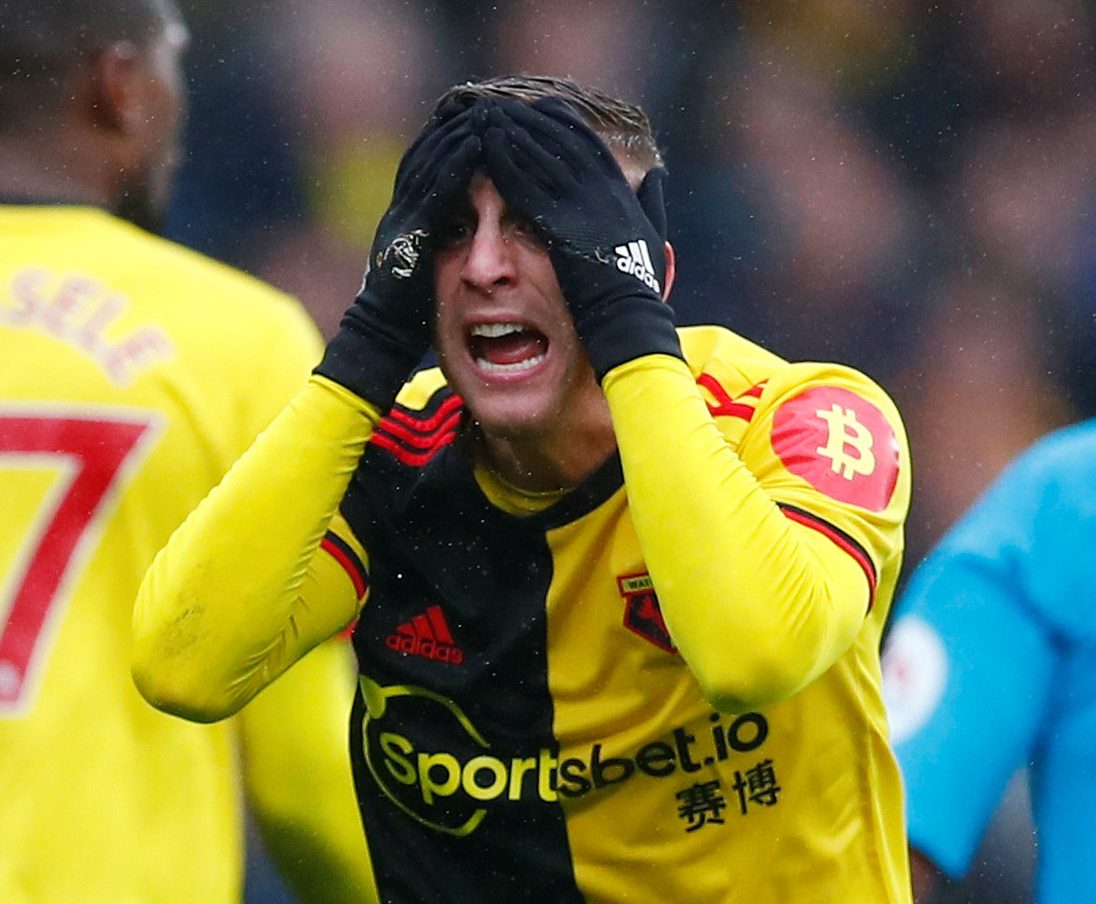 And it was only on Friday that club captain Troy Deeney revealed Foster had received social media death threats after the triumphant FA Cup semi-final.

Yesterday at Vicarage Road Foster showed he remains a brilliant goalkeeper, making amends somewhat with a string of fine first-half saves – and one key block in stoppage-time.

It ensured the Hornets would enjoy a rare clean sheet and not finish empty-handed in their 10th Premier League match this season.

Still, the drought remains and Watford have now equalled their longest winless start to a league campaign.

And they are the only team in English professional football not to have broken their duck in league competition.

More than a week ago, Watford had come within four minutes of earning that precious first triumph.

Yet Foster’s error of judgement plus two controversial VAR decisions, one which denied them a clear penalty, prevented them from a deserved victory at the Tottenham Hotspur stadium.

Injury-prone striker Danny Welbeck came off then after a few minutes in North London and will be out for months with a hamstring injury.

And with Jose Holebas suspended, Flores was forced to make two changes to his starting line-up, introducing Gerard Deulofeu up front and Adam Masina on the left wing.

Abdoulaye Doucoure scored against Spurs but had clearly left his shooting boots in the dressing room this time.

In the opening minute, Watford broke down the right wing and the cross-cum-shot from Deulofeu was spilled by Bournemouth goalkeeper Aaron Ramsdale.

It fell invitingly for the French midfielder but, my goodness, his composure was sorely lacking and he blazed over the crossbar from close range.

“That’s why you are going down,” chortled the Bournemouth support in response. And it summed up a poor display from the usually reliable midfielder.

The introduction of Deulofeu gave Watford more vibrancy and alertness up front and the Spaniard almost scored direct from a corner but his wicked inswinger rebounded off the post. The follow-up effort from Craig Dawson was blocked by Steve Cook.

Watford already have a busy medical centre and central midfielder Tom Cleverley will be the latest casualty to walk through its doors. He was replaced by Will Hughes in the 10th minute with an unspecified injury.

Bournemouth, who had made three changes from the goalless draw with Norwich, had struggled to find any rhythm in the opening skirmishes.

Yet after quarter of an hour, a set piece almost proved their salvation.

Following a well-timed run in the Watford penalty area, the header from captain Cook crashed against the crossbar.

Foster showed off his agility at three key moments during the first half. He saved well from Philip Billing despite being blindsided by a defender.

On 31 minutes, the 36-year-old palmed away a rising and swirling shot from outside the box by Bournemouth’s Diego Rico.

And then with minutes to go before the interval he anticipated the run of Arnaut Danjuma, on his first Cherries start.

Joshua King whipped in the cross from the right and though Danjuma had a decent connection, Foster was quick to block the attempt.

Not to be outdone, Ramsdale did well to block the shot from Deulofeu once the second half had started.

The second half lacked quality, contained several sloppy bookings and one incident of handbags as tempers flared, particularly the irate Cook.

The rain was relentless all afternoon yet slippery balls were not an issue to either goalkeeper.

And in stoppage-time Foster ended the day with one last heroic as he saved from Fraser.