THIS is the moment Aleksandar Mitrovic waves and blows kisses to Millwall fans following Fulham’s win at The Den.

The Serbian striker was on target in the third minute as the Cottagers secured a 2-1 capital derby win. 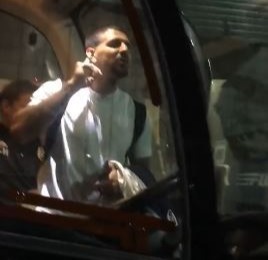 And Mitrovic ensured the celebrations continued long after the final whistle had blown.

Video footage showed the hitman boarding the Fulham bus as a number of Millwall fans shouted at him.

Mitrovic stopped on the stairs before waving and blowing kisses back at them.

They responded angrily, before Mitrovic put his hands to ears saying he couldn’t hear them.

Mitrovic then bid them a final wave goodbye as he and his teammates headed back home.

Before the game kicked off, Millwall fans booed players taking the knee as a protest against racism.

And Millwall manager Gary Rowett believes authorities need to come up with something else to unify supporters against racism.

He said: “Up and down the country I think there are so many football clubs that do such good work in their communities around equality and anti- racism.

“We need the authorities to help clubs out and find a better way to unify people.

“I don’t want to comment on individual people’s decision to do that but we just need to find a way to unify people.

“At the moment, you know, 20 seconds, 30 seconds, before a game is just causing such a rift and divide.

“Football is a great spectacle. We’re privileged to be part of it.

“What it does is has the power to help communities and do some really good work behind the scenes.

“It’s not just our club, there’s a lot of clubs doing that, so I think we need help.

“We need help to find a more positive way of taking some form of action. That’s my opinion.”