There is the boy in Chris Waller that would like to know what Winx can really do, but the trainer in him will not let it happen as she starts her final preparation in Saturday’s Apollo Stakes at Randwick.

Unbeaten in 29 runs, 22 group 1s, four Cox Plates and arguably the greatest horse to grace an Australian racecourse, Winx is still racing as a late seven-year-old because of Waller's meticulous management. 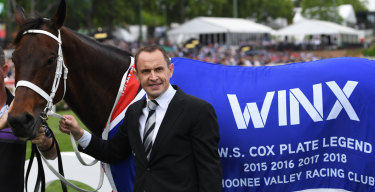 Remarkable: Chris Waller doesn’t need to know what Winx could actually do if given her head.Credit:AAP

She is still close to her best and showing no signs of letting her younger rivals get anywhere near her. But Waller allowed himself to think about what might happen if she was given her head.

“There is temptation there about that,” he said. “But we have to respect the horse.

“She is in the twilight of her career and she is in this position [of winning 29 races in row] because we have managed her.

“We haven’t over-raced her; she has three or four runs every preparation and then a break and comes back three or four months later and does it again.

“By holding herself together we have got that longevity. By not worrying about times and margins. I'm sure it would be quite breathtaking … if Hughie really did open her up one day it would be something to see.”

There is nothing left to prove in the farewell campaign for Winx. Saturday will be the start of a celebration of her greatness.

But as always first-up there are the questions whether it is all there and that can only be answered on raceday.

“I always look at the first-up race as a stepping stone to the rest of her preparation.

“There is that slight element of wondering how she’s going to go when she does get under race conditions. All the signs that she’s showing us is she’s ready to go and I’m sure we’ll be excited with how she goes on the weekend."

If there have been concerns during the streak they have come at 1400 metres, when any mistake can be punished.

Most famous was her 2017 Warwick Stakes when she bombed the start by five lengths and only just picked up stablemate Foxplay.

“The 1400m is her most vulnerable distance. It is the only distance where you felt she is at her top already, a long way out," Bowman said.

“That is a small feeling I get … but you look at the end of the races, after she been off the bit at the 600m mark, the rest of the field are pancaked at the 100m and she is just hopping into third and fourth gear at the line.

“It is about riding her, so she will hit the line strongly, so she can prepare for the runs ahead.”

Winx has the Chipping Norton Stakes in a fortnight, George Ryder Stakes at Rosehill on March 23 and the Queen Elizabeth Stakes on April 13 in her sights, but as with her past couple of preparations it is a run at a time.

"We are always looking for signs that she is not enjoying it but they are not there," Waller said.

The worry for the trainer could be the lack of speed in the race where Winx will meet seven rivals.

“I know Hughie’s answer [to where she will settle] will be where she’s comfortable,” Waller said. ''The beauty of Winx is she’s arguably the fastest horse in the country over the last 600m of a race.

“She gets herself out of trouble more often than not and that’s why she’s so dominant, so regardless of pace and where she is, we know that her last 600 metres is sizzling.

"We’ve seen her break 32 seconds on a couple of occasions.

“I just want to see her where she’s comfortable and out of trouble.

“We’ve only got one thing to worry about and that’s Winx being her same dominant self.

“She’s rated the best horse in the latest Longines awards and if she maintains that for the next few runs she won’t have any problems.”