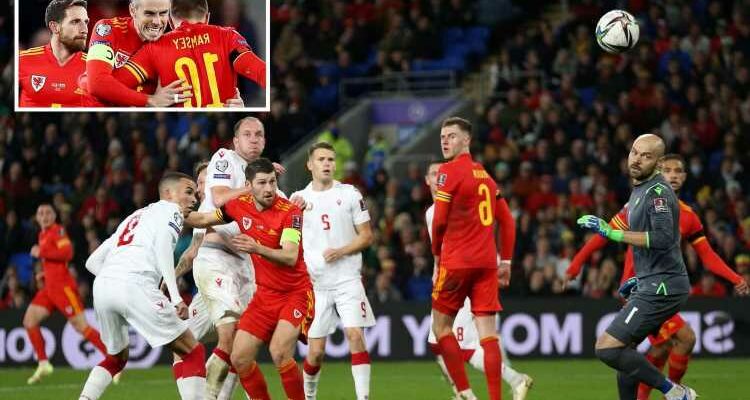 GARETH BALE asked for three points as the perfect gift to crown his 100th cap.

And his Wales team-mates delivered in style with a five-star display to keep a first World Cup qualification since 1958 firmly alive. 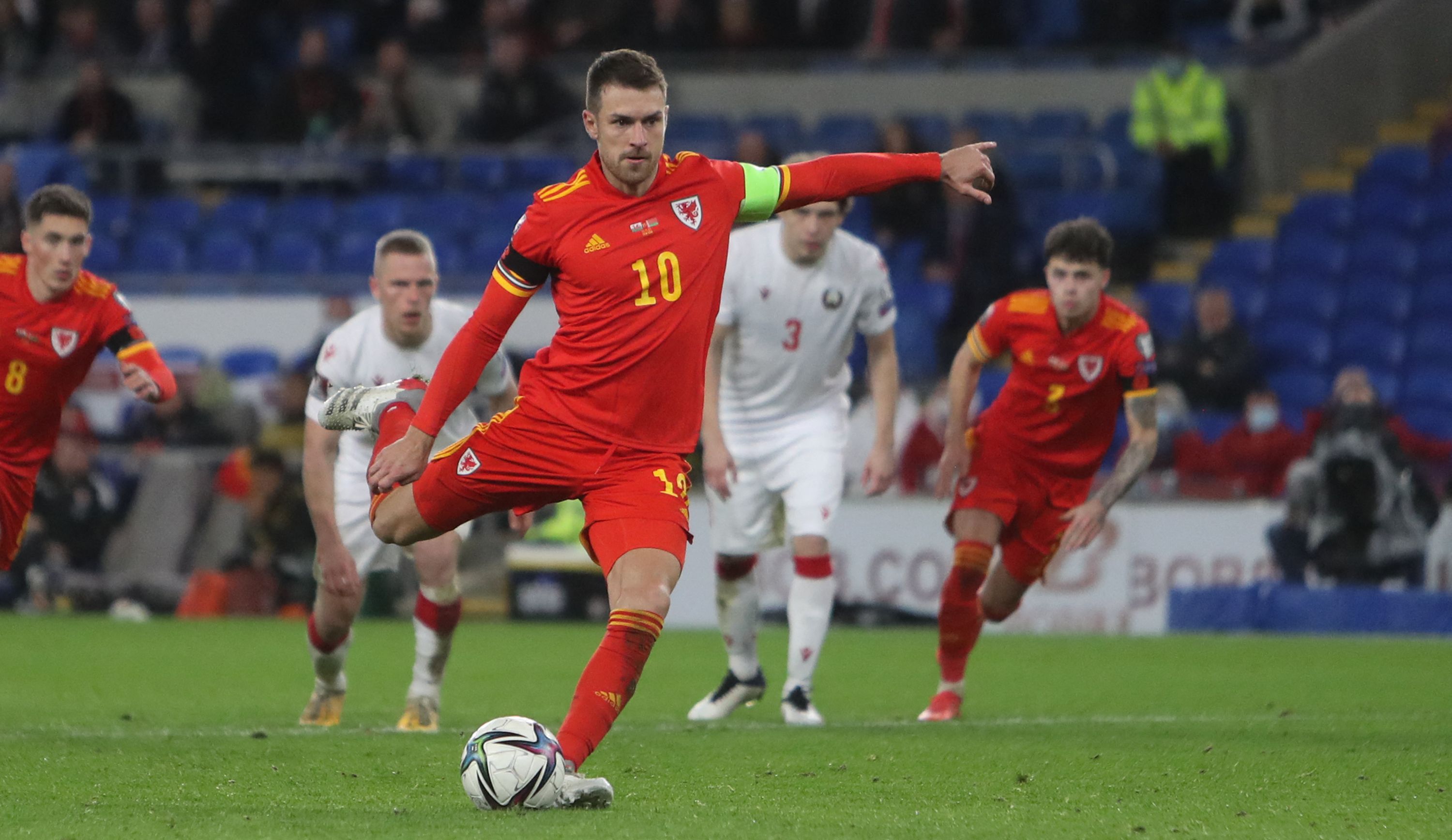 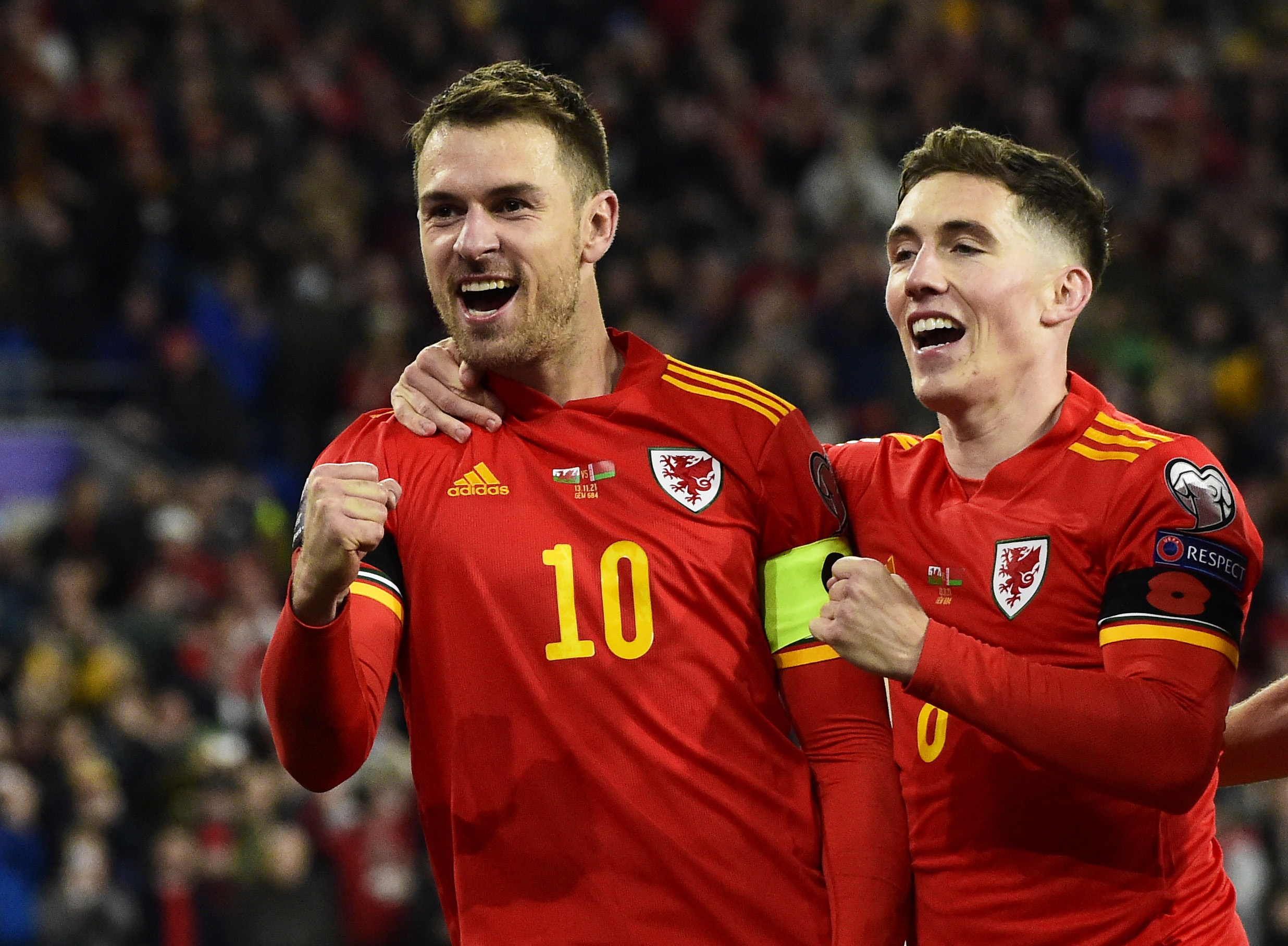 Aaron Ramsey’s brace as well as goals from Neco Williams, Ben Davies and Connor Roberts handed Bale the dream present on his landmark night in Cardiff.

Wales were aided by a dreadful performance from Belarus goalkeeper and captain Sergei Chernik, who made mistakes for the opening two goals inside 20 minutes.

Ramsey added a third five minutes into the second half by coolly slotting home from the penalty spot after a handball by Ruslan Yudenkov before Davies and Roberts sealed the win for the Dragons either side of Artem Kontsevoi’s consolation.

Real Madrid superstar Bale, who had won his fitness battle with a serious hamstring injury sustained in September, was substituted at half-time as a precaution.

Instead regular penalty taker Bale looked on as fellow Welsh attacking star Ramsey made no mistake from 12 yards.

Bale, only the second Welshman behind Chris Gunter to notch his ton of international appearances, and Wales will not care how the foundations of this convincing victory came as they moved them into second spot, three points above the Czech Republic in Group E.

A point for the Dragons would be enough to keep them above the Czechs and possibly grant them a more favourable play-off draw in March. 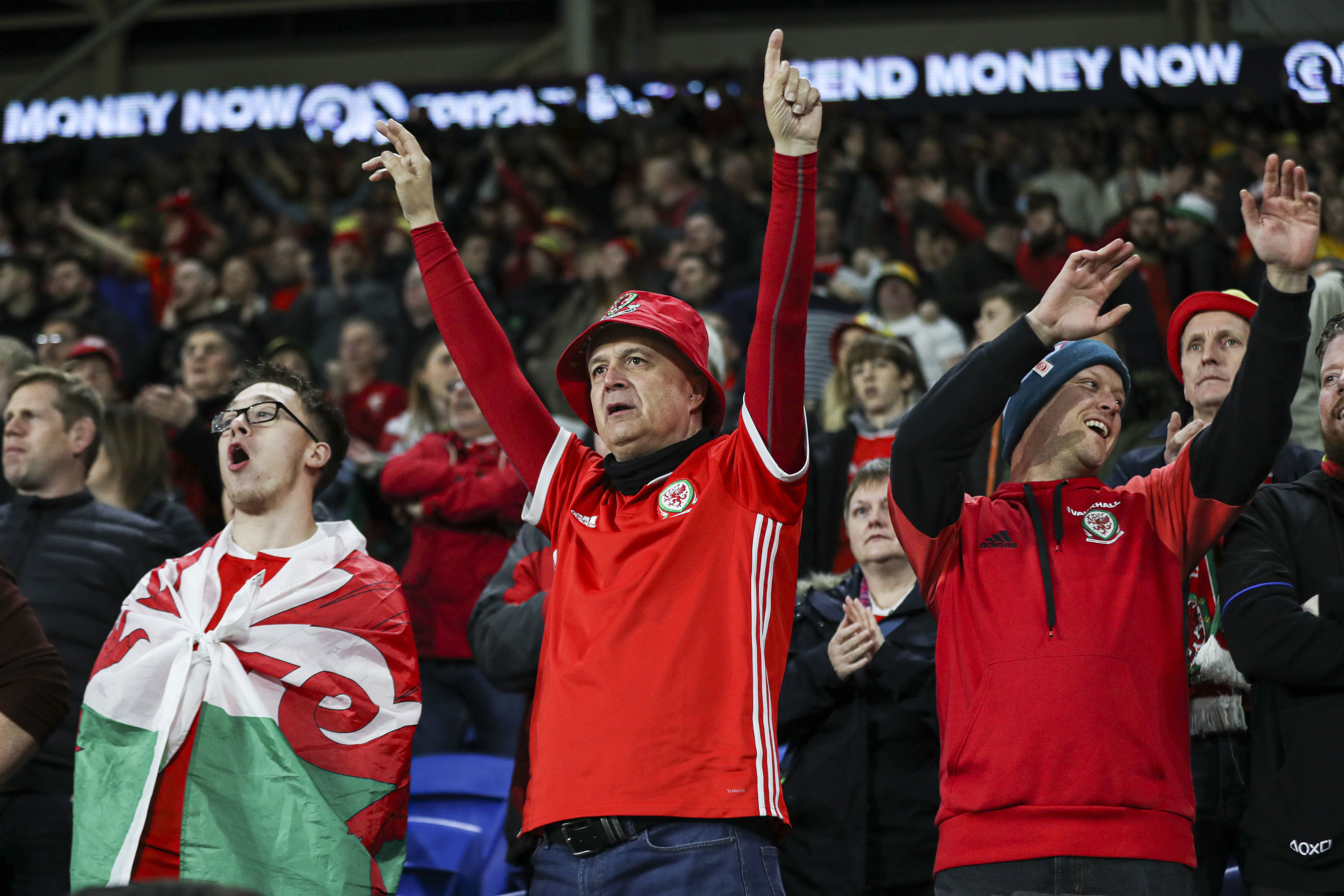 Wales have guaranteed an away semi-final when the draw takes place later this month thanks to their Nations League finish.

But their route to the Qatar finals could be helped even further if they beat Roberto Martinez’s stars or other results go their way because it could mean a home tie.

Bale and Wales really enjoy playing at the Cardiff City Stadium and the atmosphere was electric once again as their talisman led them out – despite no match action since he picked up the injury training with Real more than two months ago.

Pre-match, the nation’s record goalscorer displayed his passion for his country and once he travelled from Madrid to his hometown, there was no way he was going to miss out.

Bale waved to his family housed in a main stand hospitality box before the 27,152 produced a stirring national anthem fitting of the occasion.

Wales’ hardcore, ‘Red Wall’, showed their love for the man 1958 World Cup hero Cliff Jones, described as the best player the country has ever produced by belting out their ‘Viva Gareth Bale’ song.

And Bale and the home fans did not have long to wait for the start of more celebrations.

Defender Davies smashed a volley from the edge of the box, Chernik could not handle the Tottenham defender’s effort and Ramsey reacted quickest to tap home the rebound.

VAR checked whether the Juventus midfielder had strayed offside but the goal was given.

Minutes later, Wales’ support turned their attention to Bournemouth’s David Brooks, who is fighting cancer after being diagnosed with Hodgkin lymphoma last month.

The medical staff at the Welsh FA detected the problem during international duty and the fans sang ‘Brooks, Brooks will tear you apart again’ in a message of support.

Bale and co had also paid tribute to Brooks and Wales Under-21 and Norwich goalkeeper Daniel Barden by wearing t-shirts in the pre-match warm-up.

The t-shirts read in Welsh: ‘I David. I Dan.’ which means in English, ‘For David. For Dan.’

Wales almost doubled their advantage in a fast and strong start when Burnley’s Roberts fired just past the post after a Ramsey flick.

The Dragons have so often relied on Bale for crucial goals and assists to win games down the years when they qualified for back-to-back Euros. 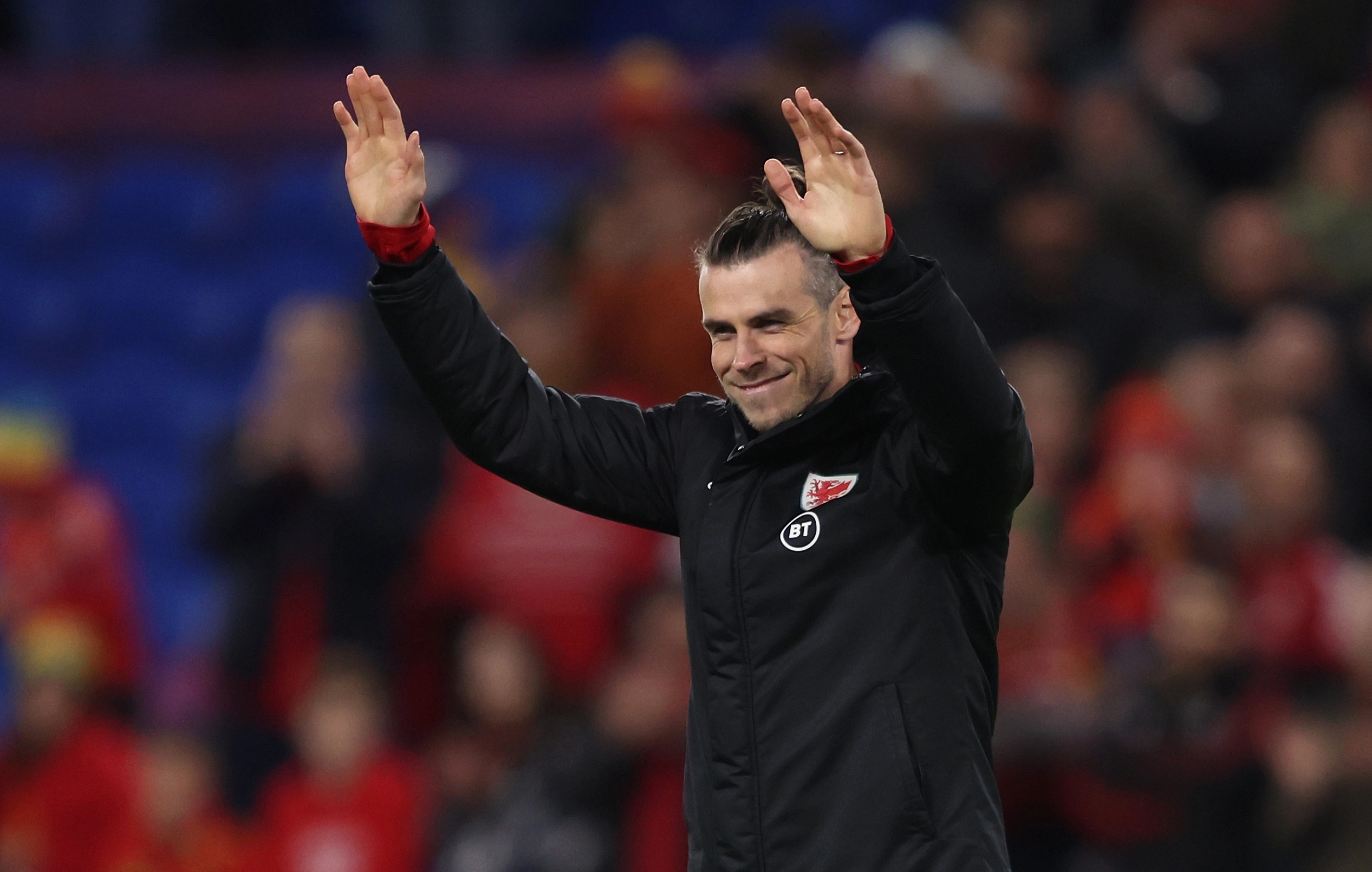 Here, Bale was able to take more of a back seat but he still managed to pick up an assist on his big night.

Bale started in a deep position when he laid the ball out to left wing-back Williams.

The Liverpool starlet raced towards the box and cut back onto his favoured right-foot before his shot caught blunder keeper Chernik off-guard as the ball crept at the near post.

Wales were in cruise control and that was reflected when Bale was replaced after a 45-minute outing in which he appeared to pick up a knock to his hip.

However, he was smiling from the bench when Ramsey netted on 50 minutes for his 20th goal for Wales.

The ex-Arsenal midfielder waited for keeper Chernik to make his move and sent his effort into the opposition corner.

Ethan Ampadu picked up a needless yellow card for a foul on Vladislav Klimovich, ruling the Venezia defender out of Tuesday’s home clash with the Belgians.

Davies scored a fourth and his first for Wales when he shouldered in Harry Wilson’s corner which left Bale grinning and applauding on the touchline.

Belarus sub Kontsevoi netted before Roberts restored the four-goal lead as Wales’ World Cup destiny is still in their own hands.