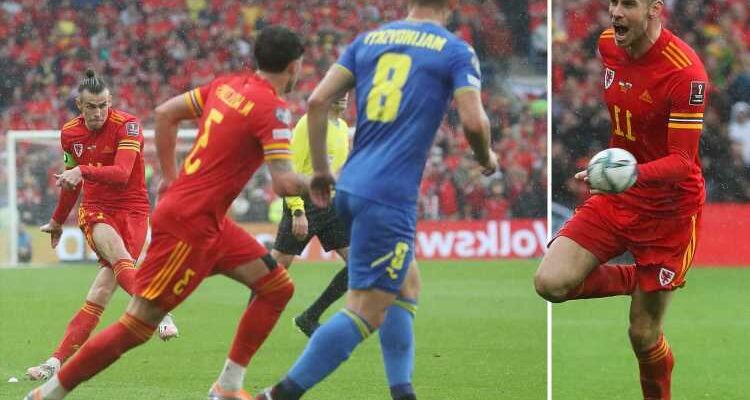 IN the end, the patriotic fervour and the raw emotion which decided this World Cup play-off was all Welsh.

Ukraine's footballers may have arrived in Cardiff fuelled by worldwide support and sympathy after the Russian invasion of their nation. 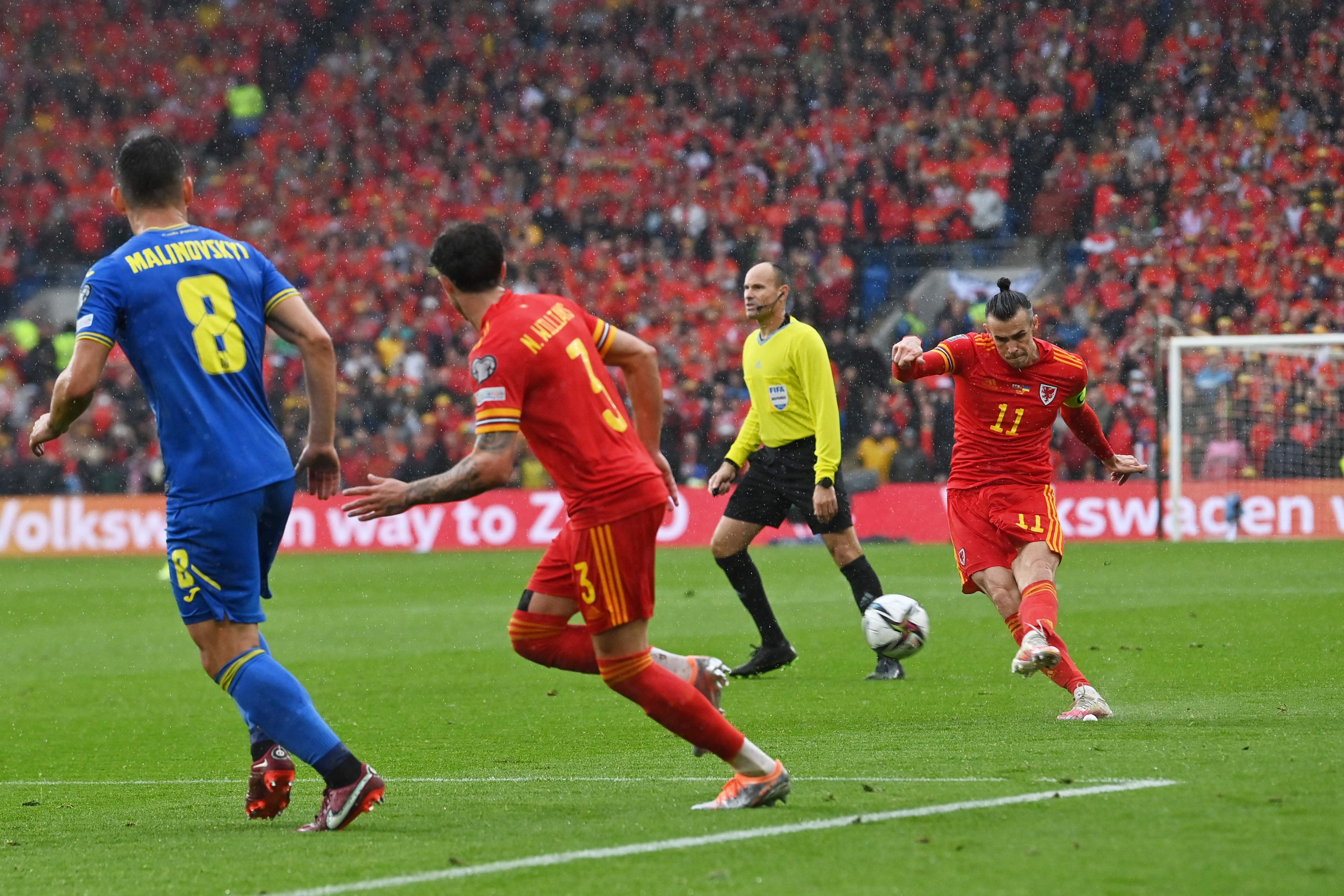 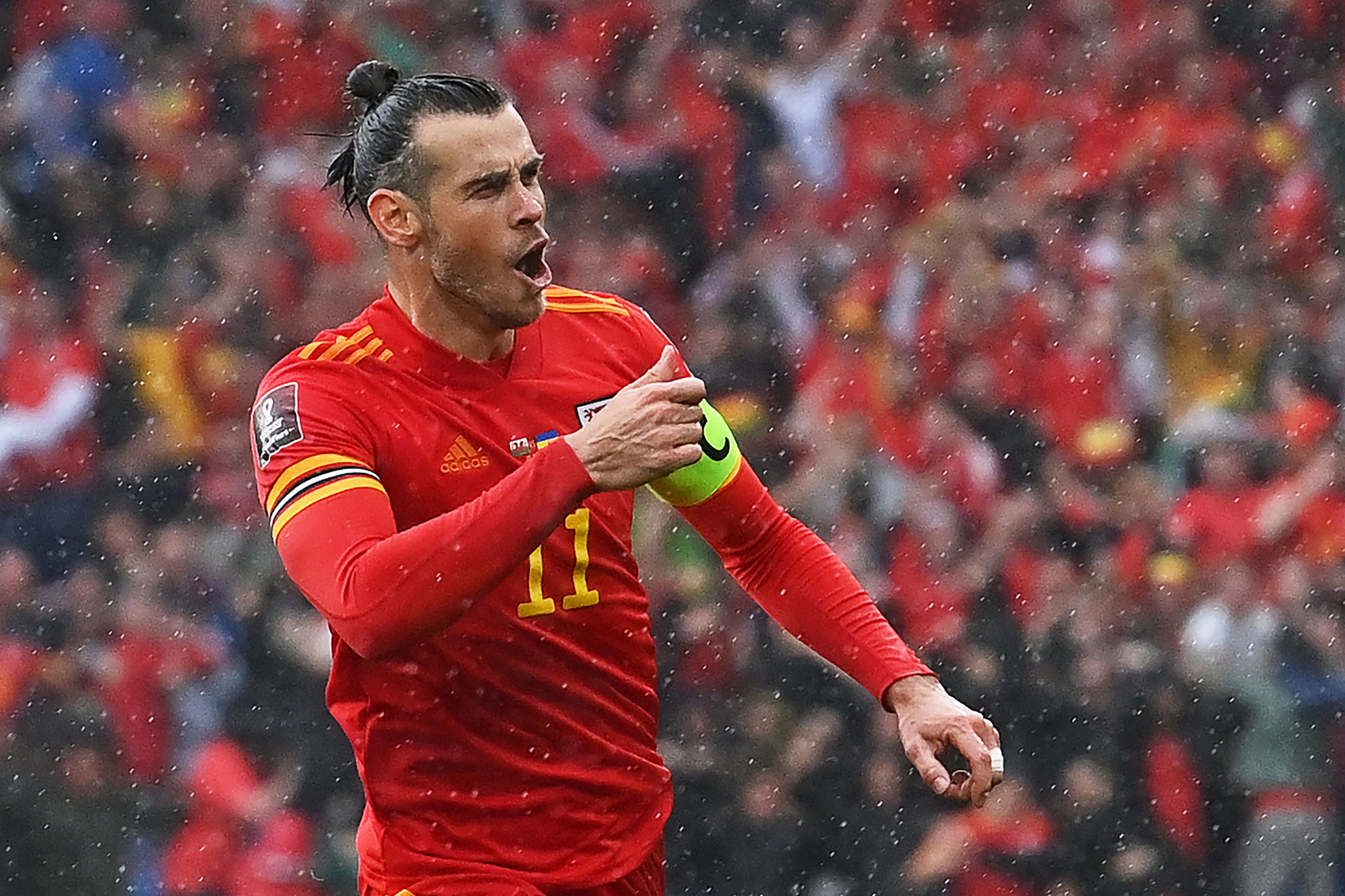 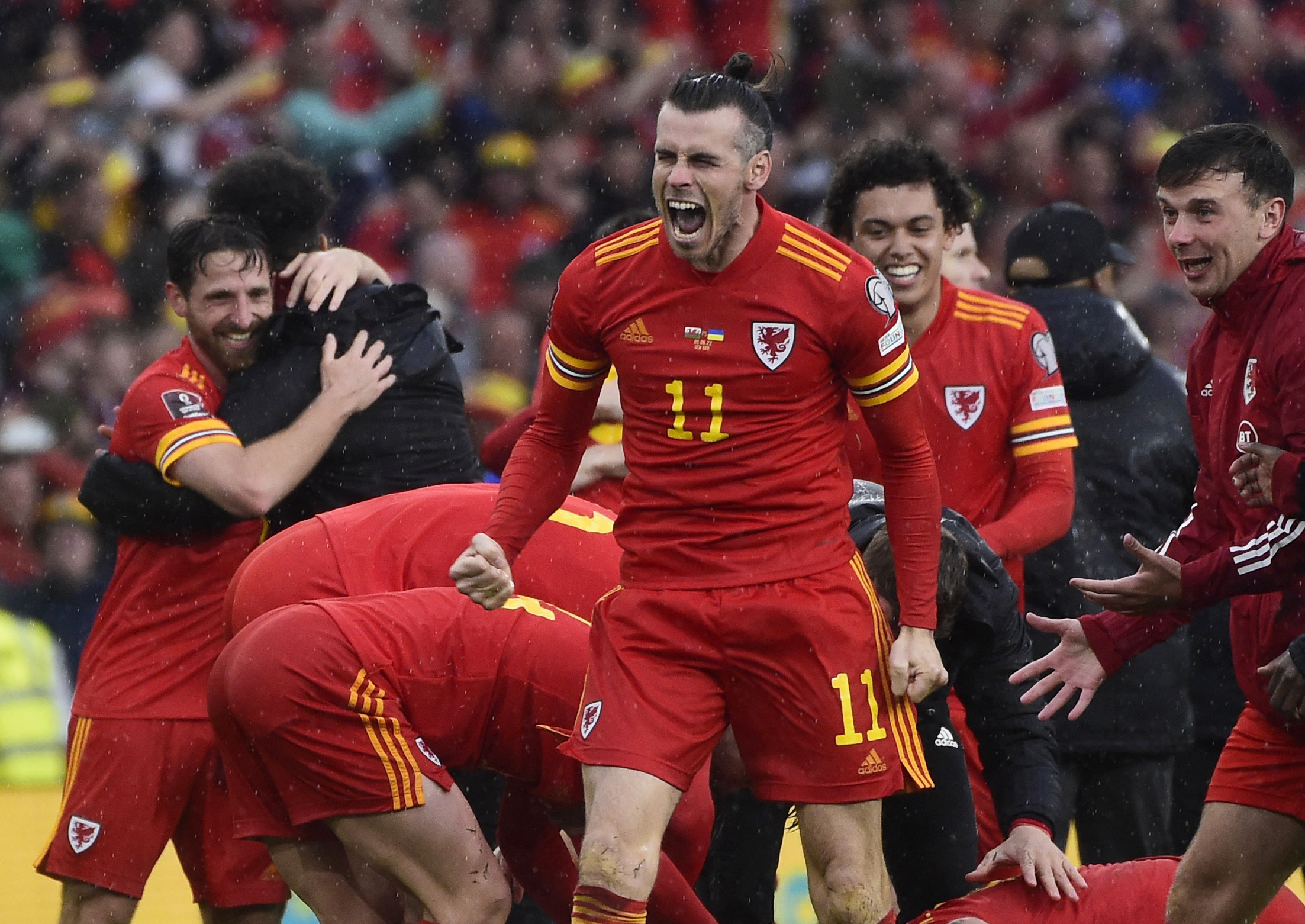 But even though the Ukrainians were tactically and technically superior and dominated for long stretches, it was the passionate support of the home crowd which seemed to propel Rob Page’s side into their first World Cup finals in 64 years.

The winner was a cruel fluke – Andriy Yarmolenko sending a diving header into his own net from a Gareth Bale free-kick late in the first half.

And although Wales passed up three good chances of their own after the break, Wales keeper Wayne Hennessey and his defenders survived a battering to qualify for Qatar.

There, they will meet England in the first all-British match at a World Cup, as well as the United States and Iran. 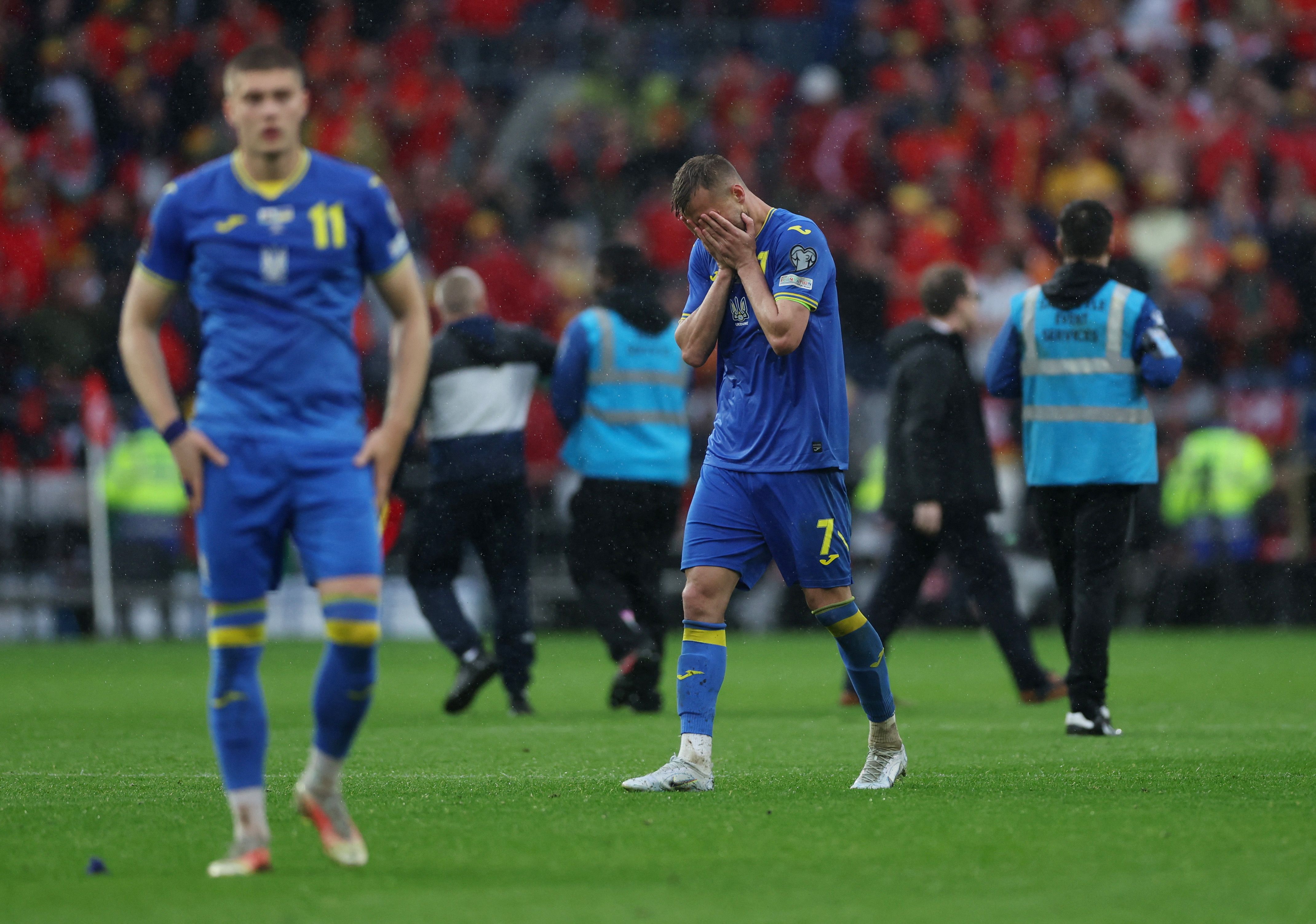 It would have felt tough on Ukraine, even without the dreadful war which has made them the rest of the world’s second favourite team.

But in the overall circumstances, it was heartbreaking for Oleksandr Petrakov’s side.

This match would have been played in March but for the Russian invasion a few weeks earlier and in many ways it was remarkable that Ukraine sent out a team and comfortably defeated Scotland in the semi-final on Wednesday.

Ukraine were cool and organised, at least until they reached the Welsh penalty area. 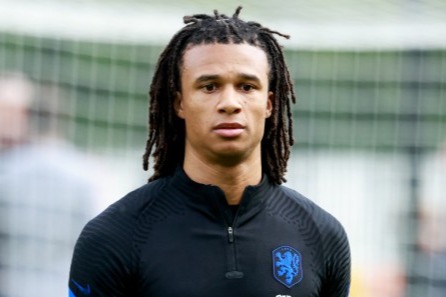 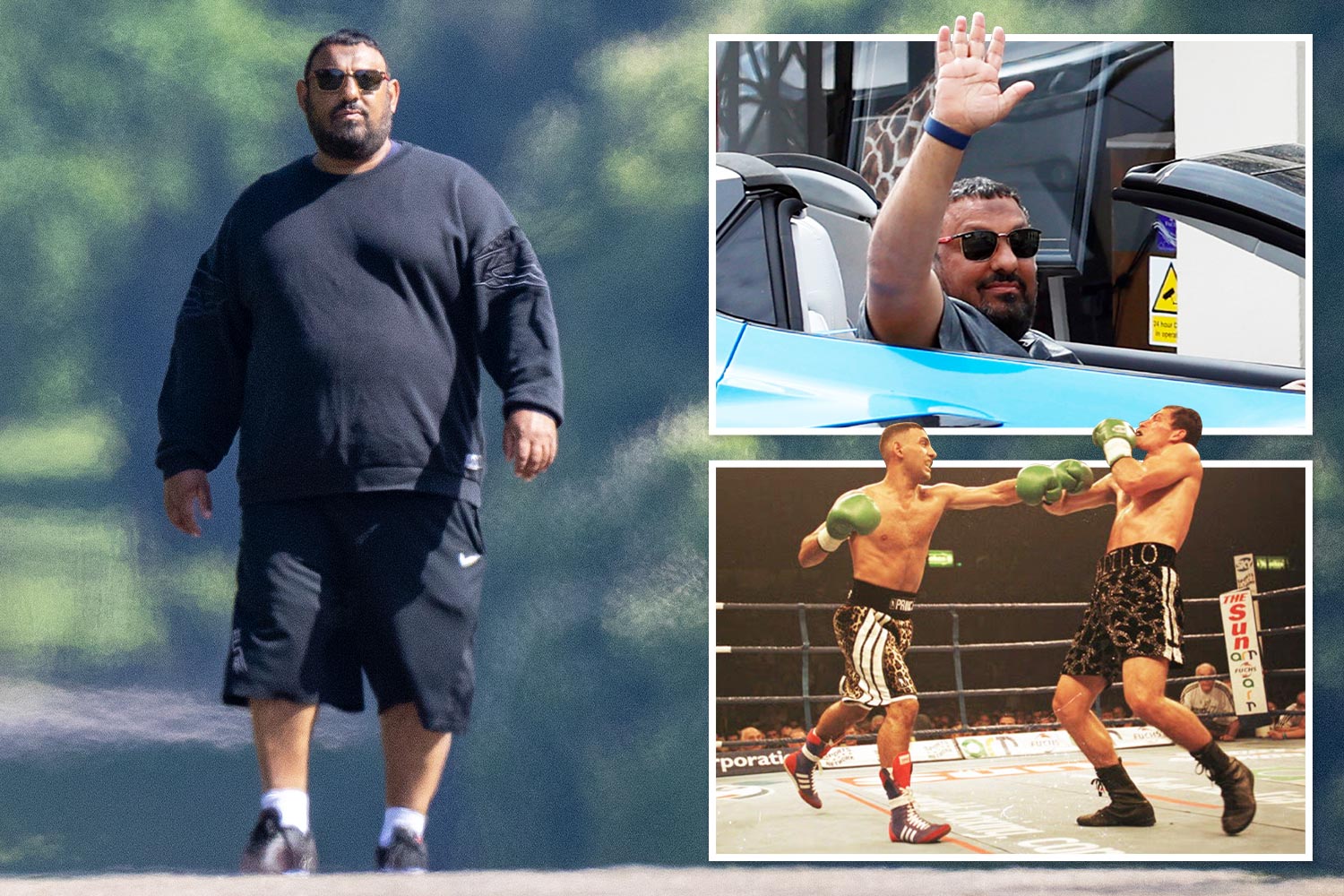 It was Wales who depended, almost entirely, on passion and guts and unity.

It is difficult to remember the build-up to a football match of such significance being conducted with such mutual friendliness and respect.

The Welsh FA handed out tickets to Ukrainian refugees and the visitors’ national anthem was applauded throughout by home supporters.

But as kick-off approach, and a quintessential Welsh drizzle fell, the male voice choir of Cardiff City Stadium’s ‘Red Wall’ was making a hell of a din – aided by Dafydd Iwan, the 78-year-old folk singer whose song ‘Yma O Hyd’ has been adopted as this team’s anthem. 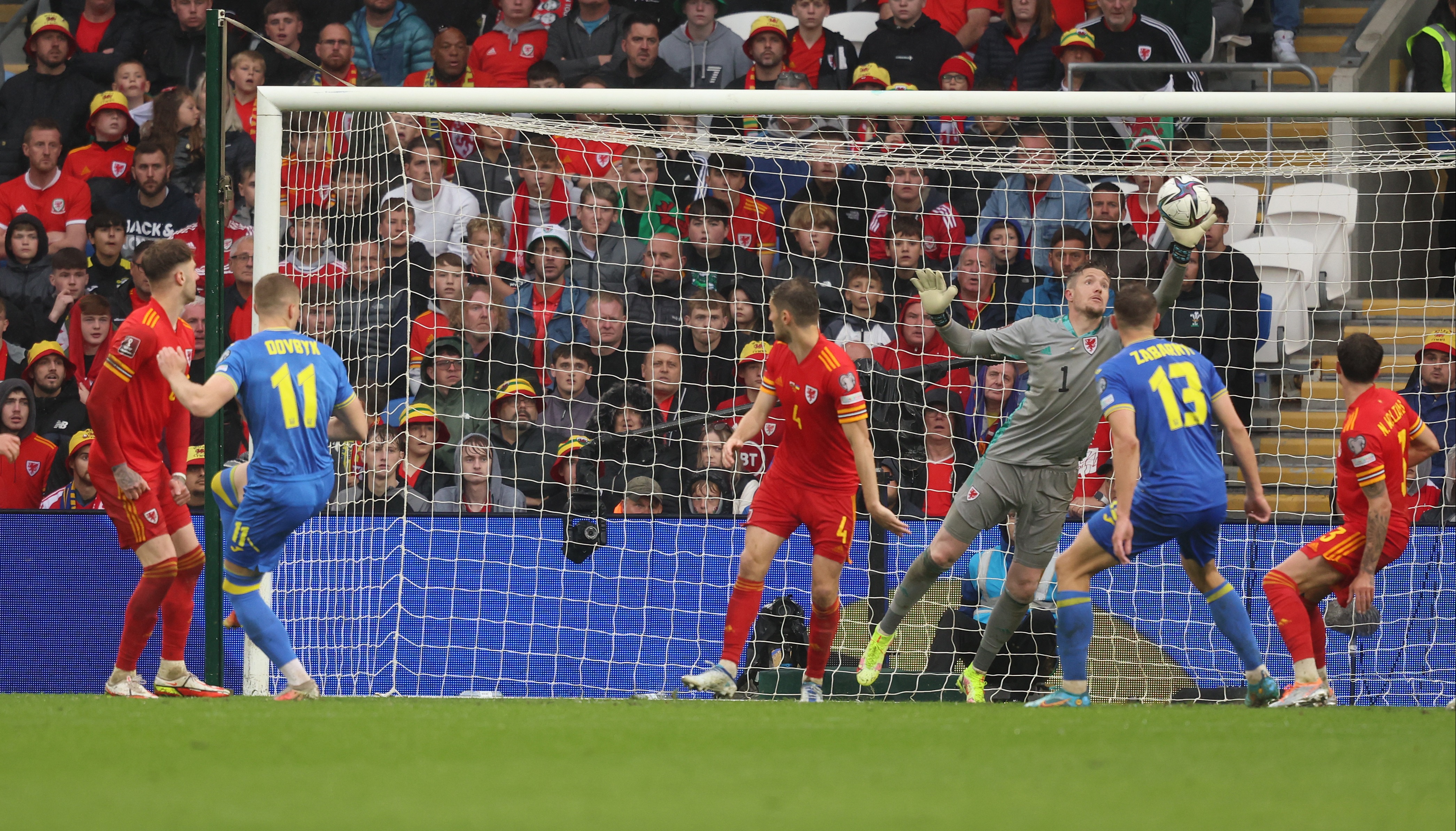 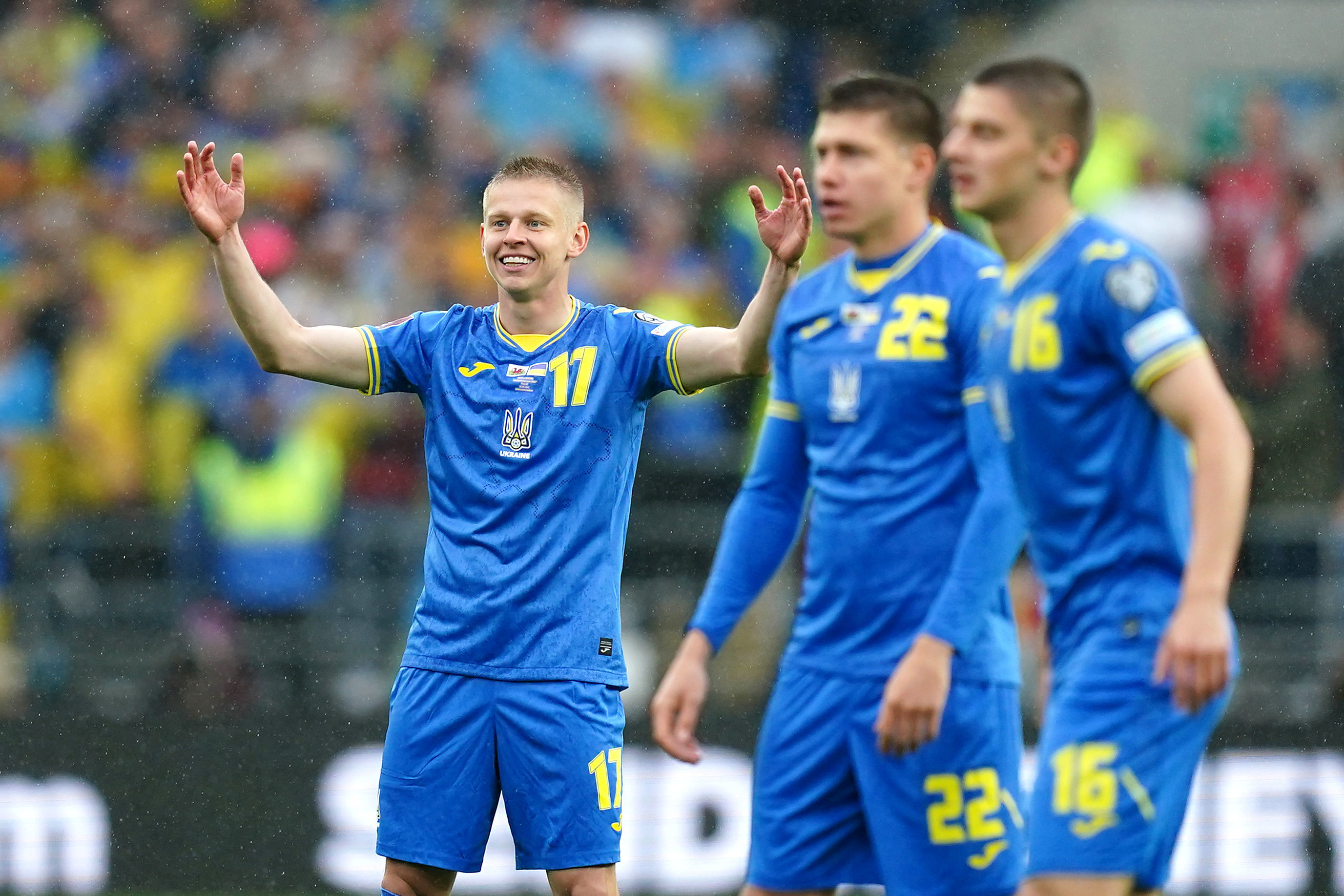 There was a time for sympathy, solidarity and humanity but that time was before 5pm.

There was controversy as soon as the second minute, when Joe Allen was booked for a heavy challenge close to his own area and Oleksandr Zinchenko netted a swiftly-taken free-kick only for Spanish ref Antonio Mateu Lahoz to rule it out as he hadn’t blown his whistle.

Ukraine were slicker and better-organised. Wales were direct and panicky. 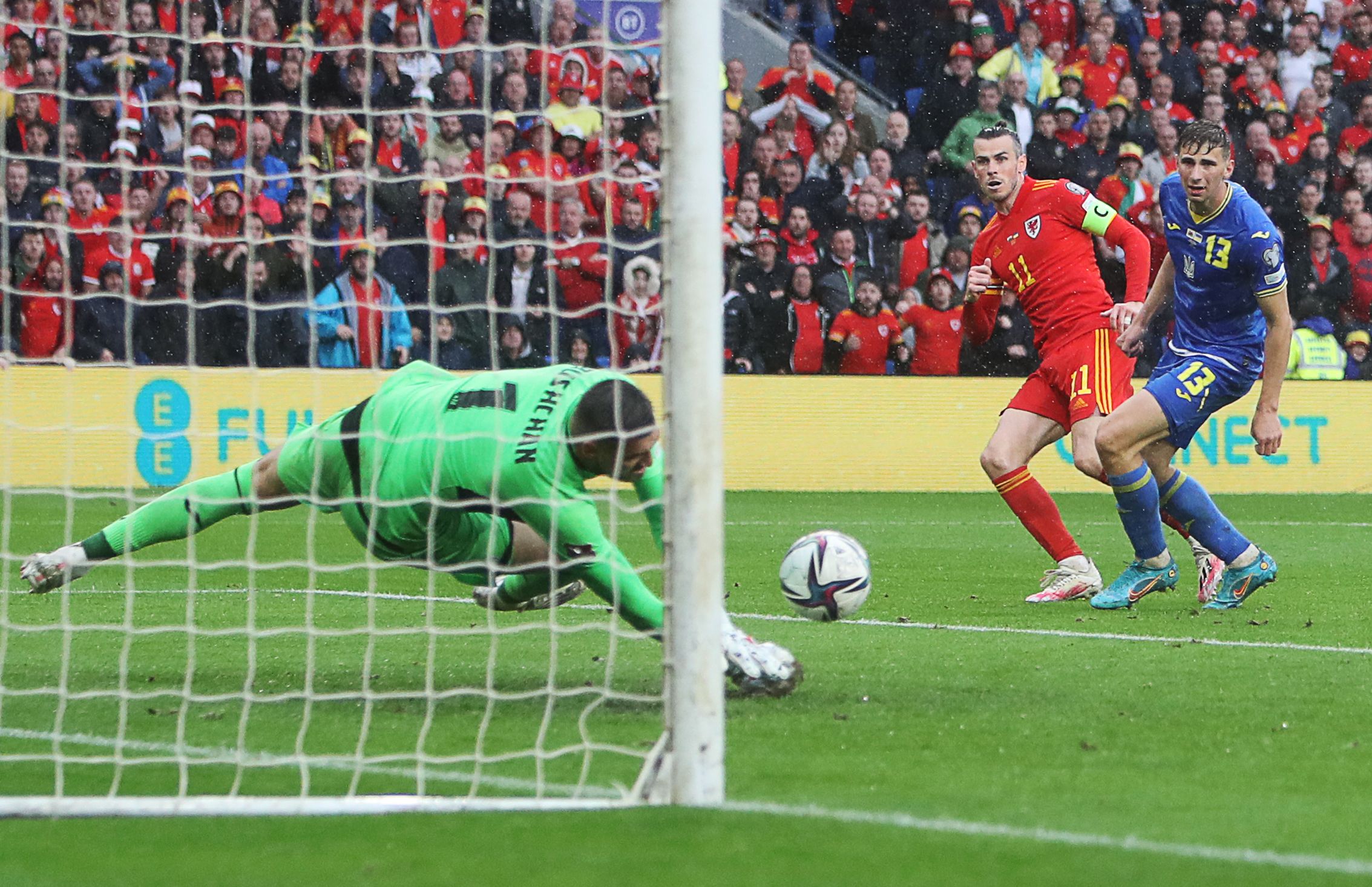 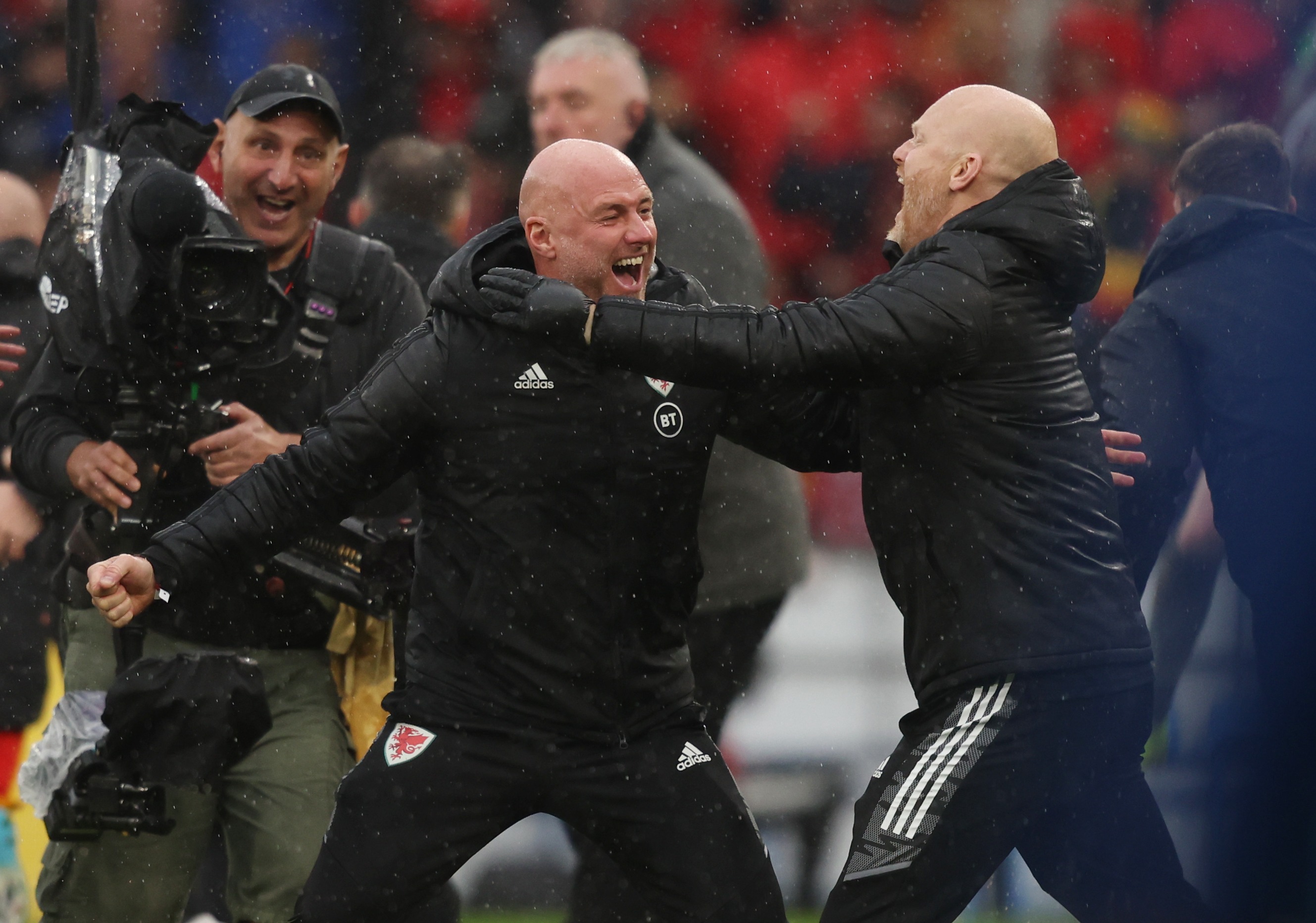 Hennessey soon had to push away a decent effort from Viktor Tsygankov and then saved well from Roman Yaremchuk.

Bale was popping up here, there and everywhere, trying to make something happen, searching for someone on the same wavelength with little success.

Zinchenko was thwarted by Hennessey when he shot from the edge of the box and the keeper then saved at the feet of Tsygankov.

So when Wales scored on 34 minutes, it was very much against the tide.

Dan James won a free-kick wide on the right-hand edge of the box, Bale has a pop and Yarmolenko suffered a brainstorm with a diving header which bamboozled keeper Georgiy Bushchan.

The place went ballistic with songs of ‘Viva Gareth Bale’ but this was unmistakably an own goal. 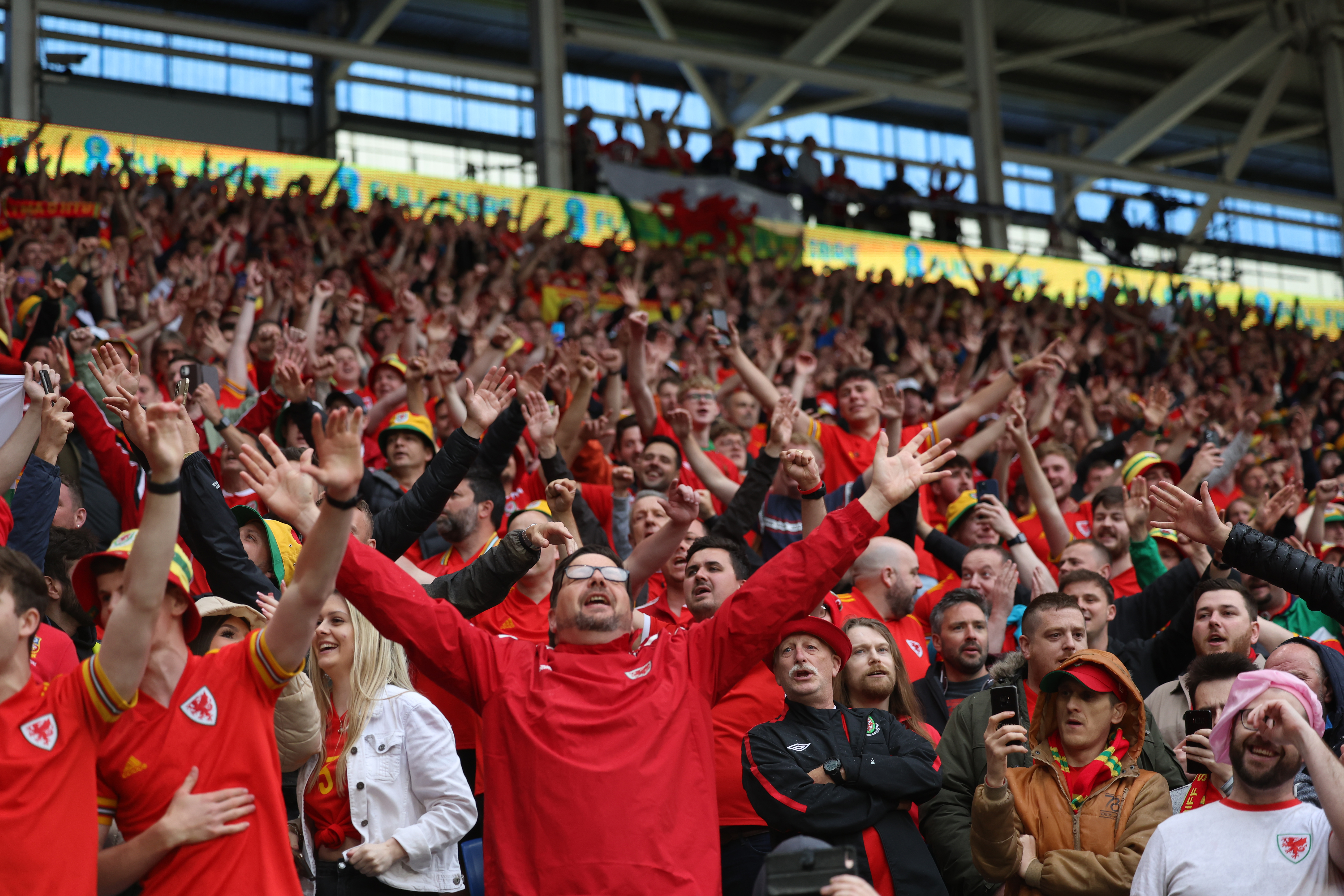 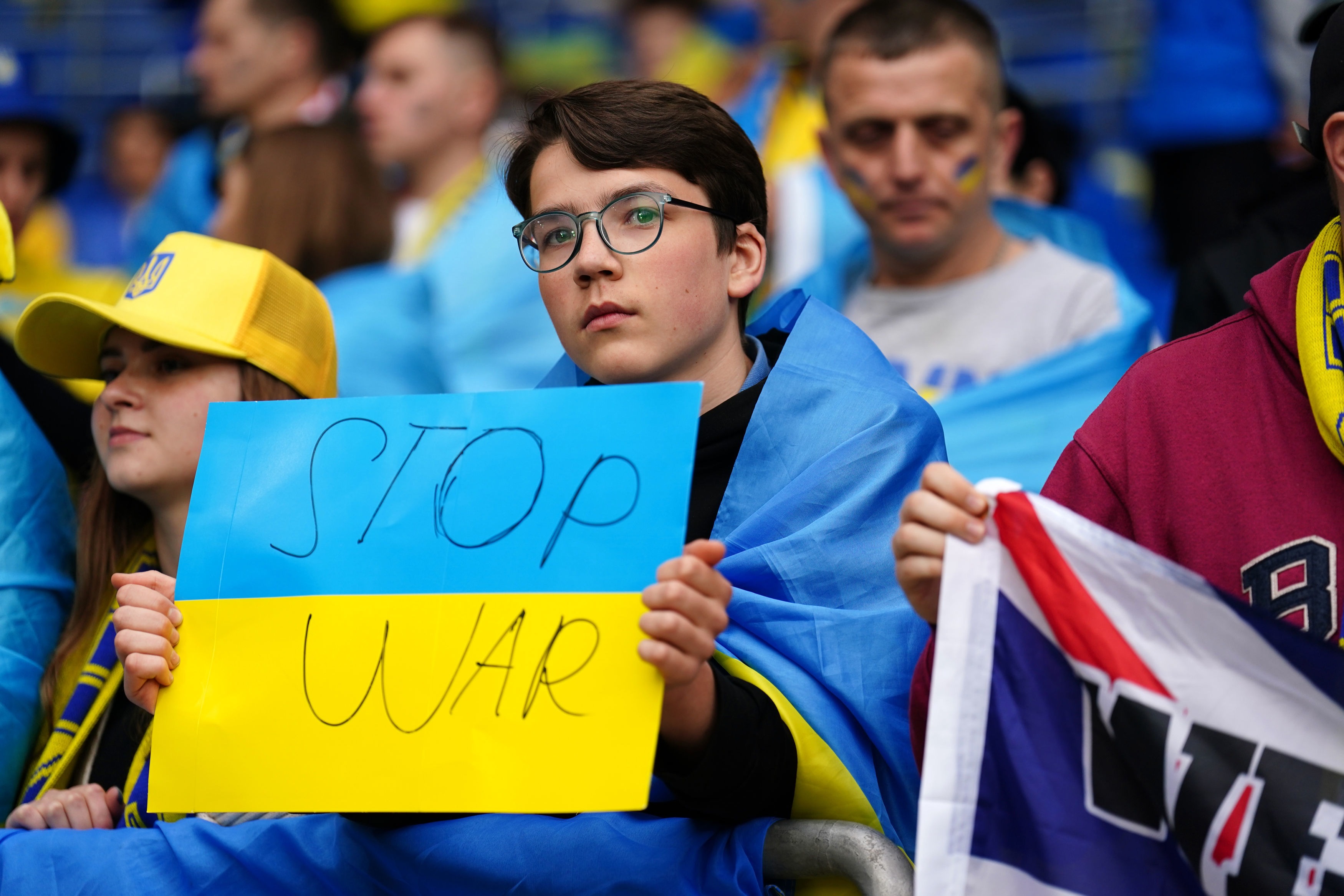 Yarmolenko soon had an excellent penalty shout turned by Lahoz and his VAR after a trip from Allen.

Early in the second half, Wales should have had a second when a break ended with Ramsey stubbing his shot wide from close range.

Hennessey was back in action soon after, saving with a foot to deny Tsygankov, then Yaremchuk spurning the rebound effort.

Davies made an outstanding tackle to stop Yarmolenko having a close-range sight of goal.

Wales were posing more of an attacking threat soon and Bushchan had to make a scrambling save to push over a deflected James shot.

Brennan Johnson, just on in place of James, volleyed against the post and then Bale’s shot was kept out by Bushchan when the Ukrainian defence seemed to freeze. 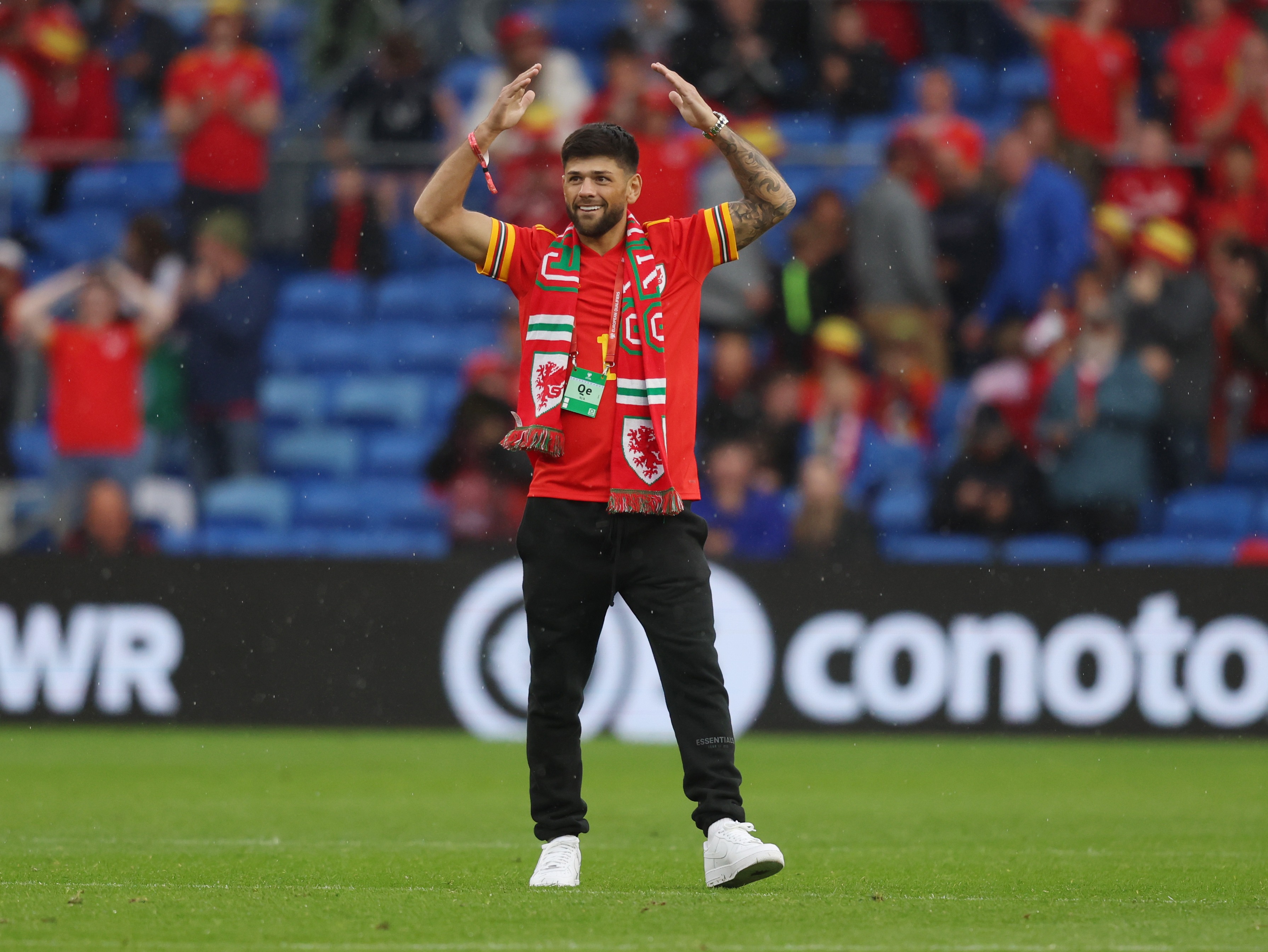 Yarmolenko’s shot was blocked by the excellent Ben Davies and then Hennessey made his best save yet to push away a header from sub Artem Dovbyk.

And the Welsh held out, glorying in their temporary status as the least popular team on Earth.

No one liked them today – but they sure as hell didn’t care.