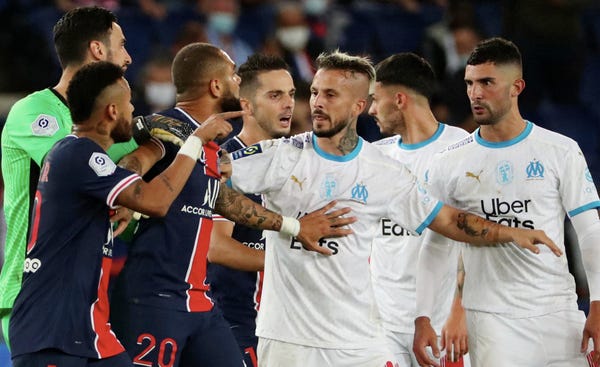 Neymar was one of five players sent off as Paris Saint Germain's 1-0 defeat to Olympique Marseille on Sunday ended in a mass brawl and accusations of racism.

The ruckus started in injury time of the second half after PSG midfielder Leandro Paredes shoulder charged Marseille's Dario Benedetto to the floor following a late challenge.

Paredes and Benedetto were both also shown second yellows, before Neymar was then dismissed after a VAR (video assistant referee) check showed the Brazilian to have punched Alvaro Gonzalez in the back of the head amid the chaos.

As Neymar left the pitch, he told the fourth official that Gonzalez had racially abused him.

After the match, Neymar doubled down on his accusations against Gonzalez, saying on Twitter that the Spaniard had called him a "monkey" and that his only regret was not punching the Marseille defender in the face.

PSG was without a number of its key players for "Le Classique" after a series of positive COVID-19 tests.

Marquinhos, Angel Di Maria, and Mauro Icardi were all absent after having tested positive following a team vacation in Ibiza, while Kylian Mbappe was also ruled out after picking up the virus while on international duty with France last week.

Florian Thauvin's 31st minute strike proved to be the difference on the night, sinking PSG to back-to-back Ligue 1 defeats in the opening two games of the Ligue 1 season for the first time in 36 years.

The Parisians were beaten 1-0 by newly promoted Lens on Thursday.

"I don't like the result," head coach Thomas Tuchel said after. "[But] we had a great game, a great performance.

"I'm very happy with the efforts of my team. If we continue to play like that, we will win all the games. I'm very happy.

"It's not usual for us not to score. We have to go back to the context of this match. We have exceptional statistics. It was a great game. I'm not at all worried. I'm happy as a coach."

On the match's ending, Tuchel said: "I didn't like our reaction in the last three minutes. I don't agree with that, it was too much. I'm going to suffer from this reaction."

PSG next takes on FC Metz on Wednesday September 16.