Melbourne Victory's A-League winning streak has stretched to six matches after a dramatic 4-2 win over Brisbane Roar at Suncorp Stadium.

Victory moved to the top of the competition ladder in a match defined by a first half that featured six goals, two penalties and a red card. 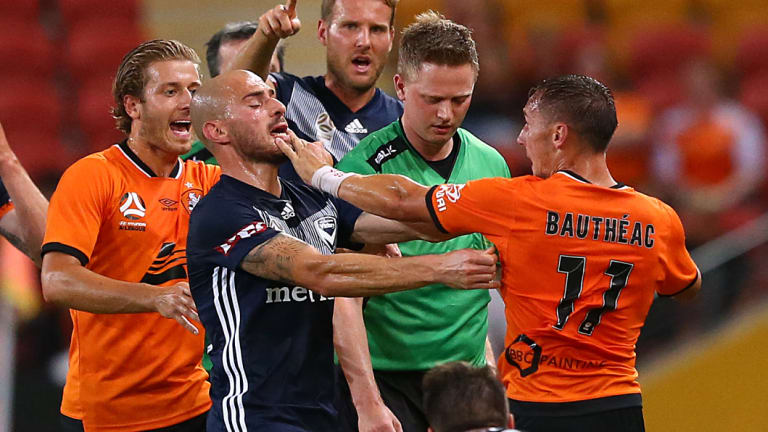 James Troisi of Victory blues with Eric Bautheac of the Roar before Bautheac was sent off.Credit:AAP

Star imports Ola Toivenen and Keisuke Honda were again at the heart of Friday night's action, both scoring for the visitors but also having a hand in the Roar's two goals as well.

Former Brisbane striker Kosta Barbarouses scored twice for Victory to take his tally to four goals in the past three games for Kevin Muscat's men.

The Roar have slumped to a third straight loss and will be without French marquee Eric Bautheac for next weekend's trip to Wellington after his send-off in a remarkable opening half.

The action began in the opening minute when Victory cleared the ball off their goal line three times in seconds, as Avram Papadopoulous, Adam Taggart and Stefan Mauk were all denied.

Victory went ahead on 13 minutes when Barbarouses swept home a James Troisi pass after Honda had pinched the ball in midfield for the visitors.

On 20 minutes, Bautheac – still fuming after being caught by Troisi minutes before – launched into a wild challenge on Victory left back Corey Brown.

The Frenchman was fortunate to see yellow for the challenge, but became involved in a scuffle with Toivenen and Troisi and was shown a second yellow by referee Adam Fielding. 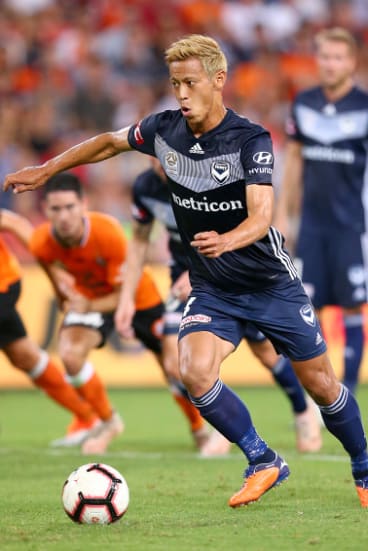 Keisuke Honda scores from the spot for Victory.Credit:AAP

Despite going down a man, the Roar levelled in the 26th minute when a goal-mouth scramble led to Honda tripping Taggart inside the box and the Brisbane striker picked himself up to convert the penalty.

Within six minutes, however, Victory were back ahead when Toivenen drifted into space in the penalty area and swept home his third goal in as many games.

Victory went two goals clear when Honda scored his fifth of the season from the penalty spot after Daniel Bowles used his hand to block a Terry Antonis strike.

Brisbane reduced the margin to one when Toivenen headed an Alex Lopez free-kick past his own keeper, but Victory still had time to score one more before halftime.

In a clever corner routine in the 47th minute, Honda rolled the ball to Troisi on the edge of the six-yard box who knocked it to Barbarouses for the New Zealand international to score his second of the night against his former club.

The visitors made sure the second period was less hectic as they closed out the game in pouring rain.

Victory will aim to stretch their winning streak to seven matches next weekend when they face crosstown rivals Melbourne City.