It had been another grinding and gruelling day for Australia. This isn't a timeless Test, but it had become a test of patience and perseverance. No wicket had fallen in the first session, two only in the second.

The pitch was still the culprit. It was unchanged and unrepentant. Slow but uneven, neither side could trust it. Lack of pace limited the bowlers, vagaries of bounce restrained the batsmen. For bowlers, it was straightforward enough to contain, hard to attack. For batsmen, it was easy enough to stay in, hard to score. Even the great Virat Kohli got away only one of his trademark crunching drives down the ground in nearly three hours of his innings' continuation. 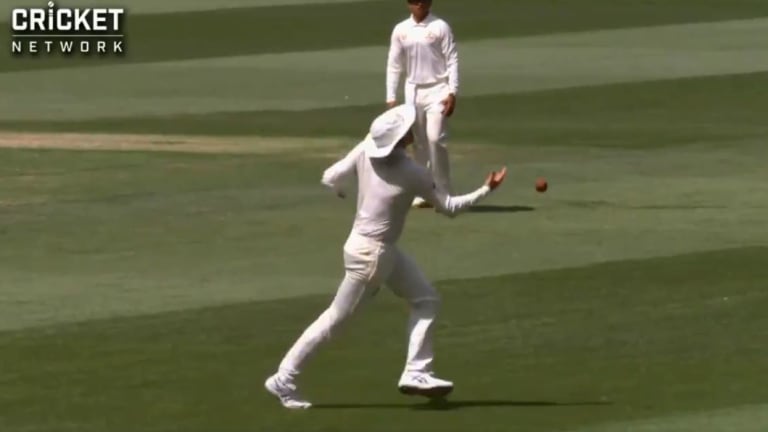 Peter Siddle’s dropped catch off the bowling of Nathan Lyon was just one missed opportunity for the Aussies.Credit:Cricket Australia

And it was damnably hot. Sweat pooled in boots and eye sockets, necks burned, legs grew leaden. Every exertion on the day had to be measured against its likely cost, and it was the same in the stands. It was problematic which would be harder to keep up – fluids, spirits or the attack.

Both sides were admirable in oppression. Pat Cummins opened the bowling in all three sessions, and the Australians took their cues from his unceasing toils. The bowlers didn't waver, the batsmen didn't relax, which meant that the action would always be in the margins: a four every now and then, an edge, a drive agonising centimetres out of a fieldsman's reach. Otherwise, it was vigil versus vigil. 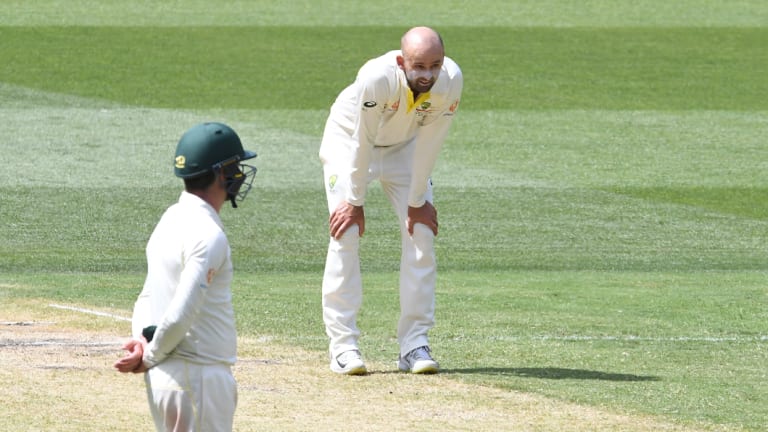 Nathan Lyon reacts after a dropped chance off his bowling.Credit:AAP

Good things surely would come to those who waited, weighty things to those who were good. The bowlers would not buckle. They bowled at Kohli's ego, Pujara's most prized possession – his wicket – Rohit Sharma's instincts, Rishabh Pant's compulsions. This day, he was more held breath than pant. The crowd frayed and fried, but stayed the course. Nathan Lyon was cheered in anticipation, Mitch Marsh perhaps by way of reparation. He played his part.

At last the wickets came, three from balls that lifted like drones, two from deliveries that stayed down from a length. For Pujara, it took both, one to rap him on the gloves, the other two balls later to scuttle into his stumps. After his epic of monkish self-discipline, it took very nearly a three-card trick to dislodge him. His had been a mighty hand.

At four down, India were showing a chink. Captain Tim Paine and short leg Aaron Finch made small talk, trying to distract Sharma. Pant is pronounced punt and plays that way. This day might be squared yet. Duly, the flighty Sharma knelt ill-advisedly to sweep at Lyon, the first shot of its type of the match. The ball skipped off the back of his bat and looped to backward square leg. For once, moral victory would be consummated.

But Peter Siddle, temping for Cummins for an over, dropped a dolly. All over the field, chins and chests fell. Returning to the dugout at over's end, Siddle was jeered by a knot of Indian fans. It was morale-crushing,

Then Pant crushed Lyon low and hard to long-on, where Cummins spilled the catch. Siddle at least had a place to hide, Cummins had nowhere. The sagging spread to hearts and hips. Eavesdropping on the stumps mics now was useless; there was nothing to say. Australia took another new ball, but 50 or so gratuitous runs went by the board and the contest remained on India's terms.

In the big picture as in the detail, moral victory could be seen for what it is: a masquerade.

Really, on such a trying day, this loosening of shape was inevitable. Australia's mini-triumph was to deny it for so long. Nonetheless, they finished the day under siege, their two opening batsmen shying nervously at India's new ball as it flashed towards them in the evening sun, while in the dugout, two yeoman fast bowlers tried to put out of their minds two imaginary balls that keep popping into their hands and out.