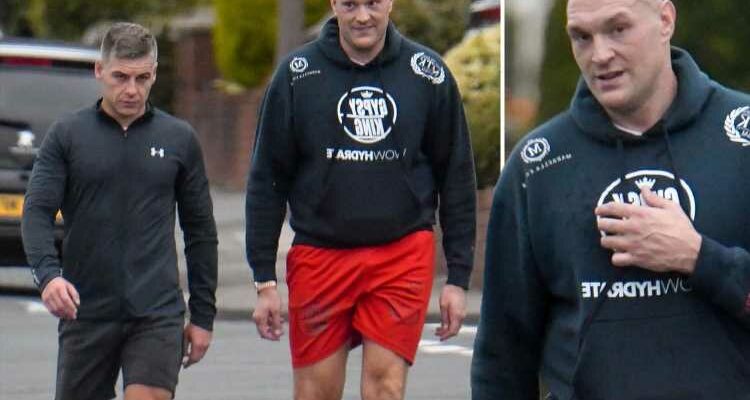 TYSON FURY has been spotted out on a morning run as he ramps up his preparation for the upcoming trilogy fight with Deontay Wilder.

The WBC heavyweight champion was seen training for his bout just days after his daughter Athena was discharged from hospital following a two-week battle in intensive care.

Tyson and Paris' sixth child was rushed straight to ICU after the birth on August 8.

But she was welcomed home on Friday and Tyson is now able to focus all his attention on beating Wilder in their third fight on October 9.

The Gypsy King confirmed last week that he is going off social media until after the fight as he concentrates solely on the hard-hitting American.

He tweeted: "Right, guys, I’m going offline until October 10, som1 [sic] else will be keeping you updated.

"Total blackout from me. See you in Vegas. Let the games begin.

BETTING SPECIAL – GET £50 IN FREE BETS WITH SKY BET

Fury controversially drew with Wilder in December 2018, climbing off the canvas in the final round of a dramatic fight which many felt he won.

After two more wins each, the pair then faced off once more in February 2020, with Fury dominating his heavyweight rival before stopping him in the seventh round.

They were scheduled to face each other again later in the year but coronavirus-related issues led to Fury abandoning those plans and instead lining up an undisputed fight with Anthony Joshua.

Wilder had other ideas though as he took the matter to court in a bid to legally force Fury into a trilogy fight.

And it worked, with an arbitrator ruling that the Brit had to face his American adversary yet again.

Originally scheduled for July 24, the bout was then postponed again following a Covid outbreak in Fury's camp.

But now it appears all system are go for the two to meet in the ring one final time, 20 months after their last clash.