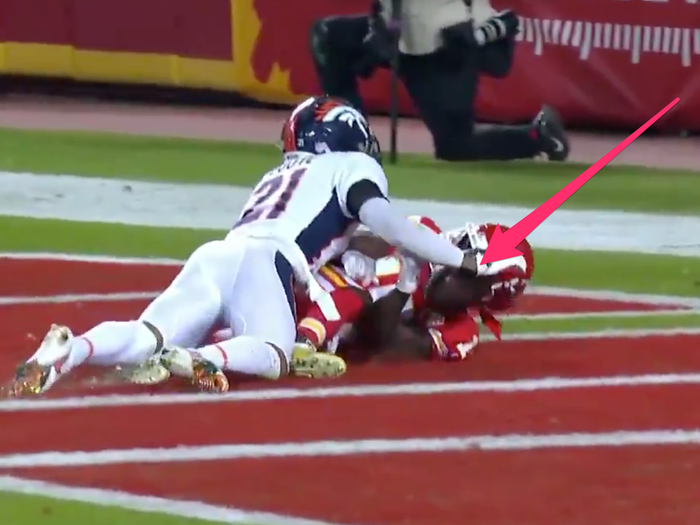 Tyreek Hill scored one of the wildest touchdowns of the NFL season on Sunday night, until he didn't.

In the second quarter of the Kansas City Cheifs' Sunday night matchup against the Denver Broncos, Patrick Mahomes took a shot at the end zone. Hill attempted to reel the ball in over his shoulder, struggling with Broncos cornerback A.J. Bouye for possession of the bouncing ball.

While Hill ultimately came down with the ball, the referees ruled the pass incomplete, seemingly believing that the ball had hit the ground at some point during the process of the catch. Hill didn't protest, so it felt safe to assume that the call was the right one.

As replays showed, Hill kept the ball off of the ground and ultimately landed with what should have been called a touchdown.

Had they known Hill's catch was good, the Chiefs could have challenged the play, and it would have almost certainly been overturned in their favor. But Hill didn't realize that he came down with it, and by the time the team figured out what happened, the Chiefs had already punted.

On Twitter, fans were enthralled by the comedy of errors.

The missed opportunity wound up turning into a 14-point swing against the Chiefs, as the Broncos took the possession after the punt to march 90 yards down the field to score the first touchdown of the game.

Next time Hill finds himself in the end zone with the ball he should remember to let his coach know before they send out the punt team.