India's batsmen spent as much of Boxing Day poking and prodding at the MCG pitch as they did facing up on it. At times, they resembled pairs of sparrows digging for worms, or crows scavenging in a rubbish heap. It was a wonder the stadium's artificial anti-seagull "hawk" did not swoop to chase them off. It was a habit, but also for habituation, a tic tactic.

Test cricket is a three-cornered contest, between two teams and the pitch, which variously must be mastered, or exploited, or at minimum neutered. This day, as many before it, the pitch acted as two-way straitjacket, at least until the imperious Virat Kohli appeared. 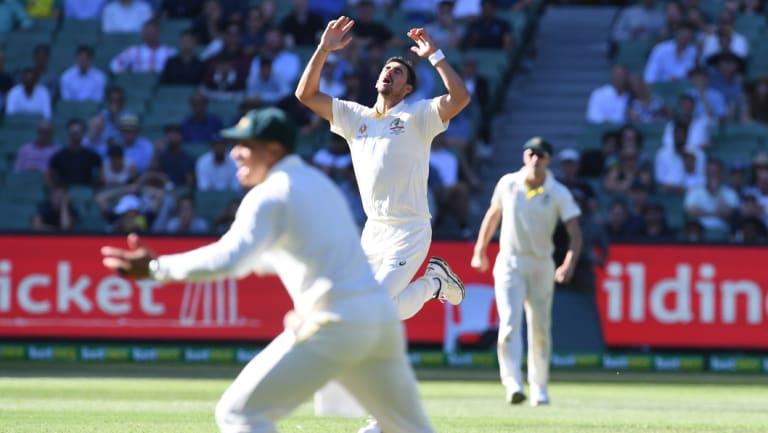 It was not that the contest disappeared into a black hole, as in last year's Ashes Test, just that it felt like half a day's play drawn out over a whole. The run rate sat at just more than two an over all day, boundaries came at five-over intervals, no ball carried to slips, and apart from one speculative Australian enquiry, the only referrals would have been for bowlers to chiropractors. There were more dots than in a Clifford Possum work.

The best that could be said was that the meditative tempo suited Boxing Day. Gratifyingly, most of the 73,00-plus crowd accepted it on those terms and in amiable humour. As much as Test cricket is a test of all faculties, it is also a test of all facilities. And this was theirs.

The curator, Matt Page, says reconditioning the MCG pitch is a 3-5 year project. Once state-of-the-art drop-in technology is now dated, but the changes can be made only incrementally. It means the MCG pitch is like a drug addict, always reforming, always rehabbing, as friends wish it only the best.

From the start, balls died at the ankles of wicketkeeper/captain Tim Paine. One, misfired to leg, eluded him altogether on the second bounce. Three slips became one, pace gave way to spin and not an hour had passed. Dried by sun and breeze, the pitch quickened a little, but hearts did not. "Fllllllllllllaaaaaaaattttttt," tweeted Glenn Maxwell, who should know.

His Victorian coach, Andrew McDonald, was more statesman-like. The key to the MCG pitch, he said, was to manage expectations, of bowlers, of batsmen. He might have added of spectators, too. Essentially, you got out of this pitch what you put in, but no more. As per the fossicking birds, there were no bargains. For bowlers, that meant effort, for batsmen time and concentration, for fans, patience.

Perversely, because cricket never can be fitted exactly into paradigms, the most threatening ball was the one that lifted sharply and unannounced. Pat Cummins was the exemplar, bending his back so that the Indians had to arch theirs. This type of delivery produced the day's only two wickets and half a dozen bruises on shoulders and backs to go on with for the batsmen, not to mention a rap or two on their gloves. Partly, this was because Indians tend to play where Tony Abbott works, outside the line. Partly, it is because the bowlers outclass the batsmen in this series on both sides.

But Australia knew this would be a hard road. Mitch Marsh's inclusion deepened Australia's reserves and allowed Paine to rotate frequently. But just as it is said that five bowlers won't achieve what four can't, no number of bowlers can take what one pitch won't give.

The Australians tried myriad ideas and combinations, over the wicket and around, orthodox fields and customised, and commentators urged even more, but it was like trying to reason with a block of concrete. Or Donald Trump. Not even Nathan Lyon could make a dent. "C'mon guys,"urged a voice through the stump mics, "there's a run-out on here." In that moment, it sounded like a plan. 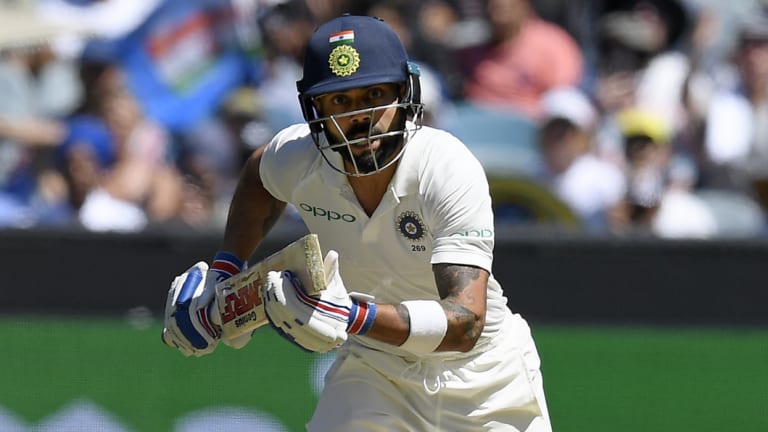 India’s captain and master batsman was dropped on 47.Credit:AAP

Bowlers wrestled with pitch, batsmen with bowlers, batsmen with pitch. Newcomer Mayank Agarwal revealed a Test match temperament and a Kohli-like optical illusion of a drive, whereby he rolls his hands over the ball, but it somehow squirts through cover point, speedily. Hanuma Vihari and the Australian attack reached stalemate, the phlegmatic Cheteshwar Pujara reached some sort of state of transcendental inertia, and at stumps was as he has been most of this year, not out.

Kohli changed, if not the pitch, the look of the game.  Two of his patent on-drives for fours sent him away, and soon he was rattling along at run-a-ball when the going rate for all overs was a run every three balls. In this mullock heap, he had found something shiny. He and Pujuara played good cop, bad cop, Kohli standing over the bowlers, Pujura cosying up to them, and they batted through the final session and won the day for India.

But there was a post-script. When the second new ball was taken, it acted like the first should have, swinging and seaming and testing two well-set batsmen and wicketkeeper Paine alike. It should have led Kohli's downfall. The contrast was, well, Starc, but also between a new pitch and one with a day's ripening. It hinted at fresh pickings for bowlers and batsmen on Thursday morning, and a different style of game. Let's see.