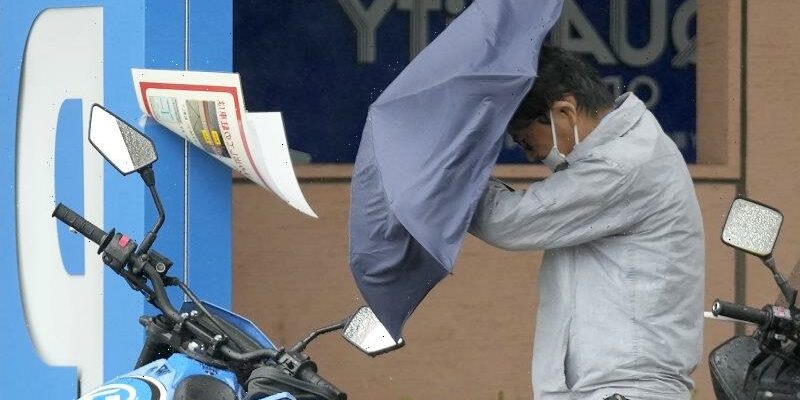 Tokyo: Japan is staring down a typhoon, searing heat and rising coronavirus infections as it moves towards the first weekend of the Olympic Games when a stack of medals are on the line.

Typhoon Nepartak is continuing to pose a threat to Tokyo and surrounding areas despite not hitting the capital as severely as initially feared on Tuesday. The tropical storm is forecast to land on the Tohuku region, about three hours north of Tokyo, on Wednesday. The Japanese Defence Force said it was ready to deploy disaster units to the location if required. 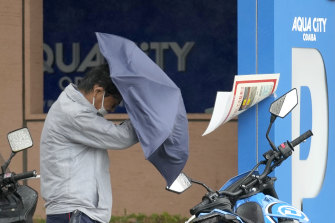 A man holds un umbrella against strong wind and rain on Tuesday in Tokyo.Credit:AP

Tokyo is expected to get up to 31.5 mm of rain over the coming day, a fifth of its average monthly average rainfall in 24 hours. The storm has already forced changes to the surfing, archery and rowing events and organisers are planning contingencies for winds that could reach up to 118 kilometres per hour.

It follows days of temperatures heading into the mid-30s and humidity above 80 per cent, both of which have been compounded by Tokyo’s dense urban landscape and limited shade at major events.

“It’s very hot and also very humid, so the hard courts absorb the heat, and it stays trapped in there,” he said on Saturday. “Not much wind, not much breeze.” 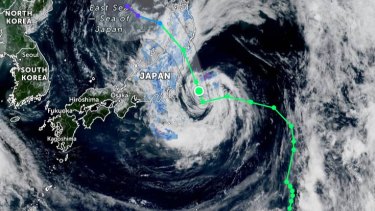 Tokyo held its 1964 Olympics in October to avoid the summer heat and the threat of typhoons, but switched to July for the 2020 edition, the preferred time slot of the International Olympic Committee and the US broadcasters – between the NBL and NFL seasons.

“With many days of mild and sunny weather, this period provides an ideal climate for athletes to perform their best,” the city said in its Olympic bid.

The triathlon was forced to begin at 6.30 am on Monday and Wednesday to avoid the scorching mid-day sun but that did not stop gold medal-winner Kristian Blummenfelt from vomiting with heat exhaustion as he collapsed over the finish line.

The typhoon is likely to bring temperatures down temporarily but the Japanese government faces rising public anxiety about mounting coronavirus infections.

Tokyo has now gone seven consecutive days with COVID-19 infections above 1000, adding 1429 on Monday, double what it recorded a week before the Games began. It was set to report more than 3000 new cases on Tuesday, Reuters reported.

Spectators, shut out from Olympic venues, have been lining up along streets to catch a glimpse of cyclists and triathletes, while restaurants and bars continue to flout alcohol and opening restrictions.

Tokyo’s Bureau of Social Welfare and Public Health said on Tuesday that people in their 20s and 30s accounted for more than half of the total cases. Vaccination doses in the country of 126 million has now reached 79.38 million people, most of whom are over 50.

“The number of infected people has remained high and the infection is spreading,” a spokeswoman said. “The Olympic Games are happening every day but we ask you that you watch them at home and cheer for the athletes.”

In the Olympic bubble, seven more Games personnel, including two athletes tested positive for the virus on Tuesday. The total number of infections connected to the Games has now passed 150. 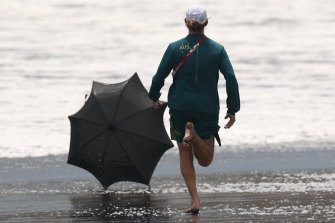 The growing number of cases has created an ongoing political threat for Japanese Prime Minister Yoshihide Suga who had hoped the spectacle would unite the nation behind his government.

Suga, who faces an election by October, recorded the worst approval rating in almost a decade of any Japanese prime minister. A Nikkei/TV Tokyo poll released on Monday found the 72-year-old had fallen 9 percentage points to 34 per cent since June.

The public dissatisfaction was mirrored across three of Japan’s other major media outlets, the Asahi Shimbun, NHK and Kyodo News.

Only one Japanese prime minister in the past two decades, Keizo Obuchi, has survived more than a year after recording such a low approval rating.

Suga’s party, the Liberal Democratic Party, has been in power almost continuously since the 1950s but leaders have conventionally resigned when polling reaches below 40 per cent.