PORTLAND, Ore. — Daniel Roder, a longtime fan of the Portland Trail Blazers, arrived at their arena about two and a half hours before a recent home game, a full 30 minutes before it was set to open to the public. Roder knew he could not be late, not when his friend Daniel Tikka, with whom he shares season tickets, had given him an important job.

“He’s working tonight, so he couldn’t be here,” said Roder, 69, of Vancouver, Wash. “And when he’s not here, I know that I need to pick up two of these for him.”

Roder pointed to two freshly acquired posters — but not just any posters. For each home game since the start of last season, the Blazers have commissioned an artist from the Portland area to design a 12-inch-by-18-inch game-day poster, basically in the style of old rock concert posters. Each includes the date of the game and the opponent, but the artwork is the star attraction.

In addition to various renderings of roses, trees and snow-capped mountains, which are staples of the Portland aesthetic, the posters have ranged from playful to poignant.

For a game against the Los Angeles Clippers, William Kirk depicted a player dunking the ball over a sinking ship. For a game against the Toronto Raptors, Matt Blairstone illustrated a cartoon of a dinosaur about to tumble off the top of a skyscraper. And for the team’s annual Pride Night last month, Diego Mancilla created a rainbow-hued homage to inclusivity.

“It’s a huge deal for the artists,” said Michael Verhey, a graphic designer who worked with his wife, Meghan, to make the poster for a home game against the Denver Nuggets last month. “You can’t really ask for better exposure than this.” 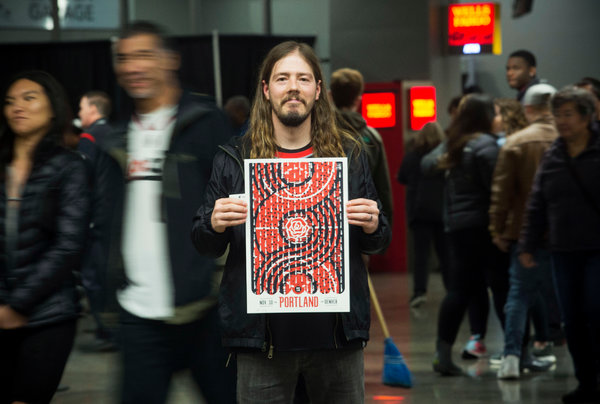 At the same time, the posters themselves have become some of the hottest collectibles in the Pacific Northwest. The Blazers, in addition to playing decent basketball, might as well be moonlighting as art dealers. Just 110 posters are printed for each home game — all of them hand-numbered — and they usually sell out. Once they are gone, they are gone for good.

Jay Gregg, a retired lumber broker from Lake Oswego, Ore., began collecting the posters last season with his son Austin, 23. To date, they are missing just two of them — the first two from last season. Gregg, a season-ticket holder for 44 years, has been unsuccessful in his efforts to make his collection whole.

“Kind of frustrating,” Gregg said. “I was even going to put a little blurb in our neighborhood blog to see if anyone had extras I could buy.”

Chris Goodall, 35, a union carpenter from Portland, has them all — and nearly all of them in duplicate. Last season, he acquired each poster that was numbered 70 (for the team’s inaugural season) and 77 (for the year of the team’s lone championship). Goodall is still trying to figure out what to do with them all.

“I didn’t realize how much I’d like them,” said Goodall, who also has every game program from the last five seasons. “It’s like a part-time job.”

The posters sell for $12 apiece, with the net proceeds — about $6 per poster — going to the team’s charitable foundation. But even at the bargain-bin price, the Blazers have done an extraordinary job of making them feel like an exclusive item. While season-ticket holders have the option of reserving them in advance, the posters are otherwise available for purchase only on game nights inside the Moda Center at Rip City Clothing Co. No game ticket? No dice.

There is a business calculus at work, of course. The Blazers want fans to get to the arena early — and they want them to shop.

“They’ll buy the poster, and then they’ll be walking out and maybe they’ll see a cool shirt,’ ” said Todd Adams, the team’s brand development manager. “Plus, if they’re getting here early, what are they going to do for the next two hours before the game starts? ‘Oh, I’m hungry.’ Or maybe they’ll go down to watch warm-ups, which only enhances their game-day experience.”

During the 2016-17 season, the team came up with a unique holiday gift for sponsors and other important clients: a custom serigraph by Dan Stiles, a local artist. Chris McGowan, the team president and chief executive, has an enormous collection of Pearl Jam concert posters, and he liked the concept, Adams said. So did the recipients of Stiles’s artwork.

‘We just thought, O.K., we might be on to something here,” Adams said.

The Blazers borrowed the general blueprint from Major League Soccer, where game-day posters have long been fashionable among several of the teams, including Orlando City Soccer Club and the Red Bulls. But the series was also an easy way for the Blazers to tap into the city’s vibrant artist community.

“We were overwhelmed by the amount of folks who had an interest in bringing this concept along,” said Dewayne Hankins, the team’s chief marketing officer.

Adams gives the artists a handful of guidelines: no blood, no guts, no nudity. Also: no opposing team logos because of licensing agreements. But aside from those minor stipulations, Adams wants them to exercise their creativity. In exchange for their work, the artists receive $315, two game tickets and visibility. The Blazers feature the posters at the arena and on their social media accounts, which have large followings.

“It’s usually up-and-coming artists, and they definitely seem to appreciate the nod that we give them,” Adams said.

The Blazers solicit applications from interested artists through the team’s website. But Adams also does some scouting at street fairs, which is how he met the Verheys, who have their own company called Iron Canvas Studios. Adams followed up last spring.

“We’re really big fans,” Meghan Verhey, 34, said, “so when we got the email asking if we would be interested, we were like, ‘Yes, please.’”

Michael Verhey, 36, who did the bulk of the artistic labor on their Blazers project, said it was actually a labor of love. He went through about 20 versions of the piece before settling on a sort of dreamscape court enmeshed with the team’s logo. He was aiming for a lot of movement, he said. He chipped away at it for nearly three weeks.

Michael Verhey arrived for the game in a Damian Lillard jersey. Meghan Verhey wore a vintage Blazers T-shirt that looked like it was from the Bill Walton era. She said it was a big deal for them — big enough, in fact, that her parents insisted on coming in from Fargo, N.D., for the game.

Their posters sold out before halftime.