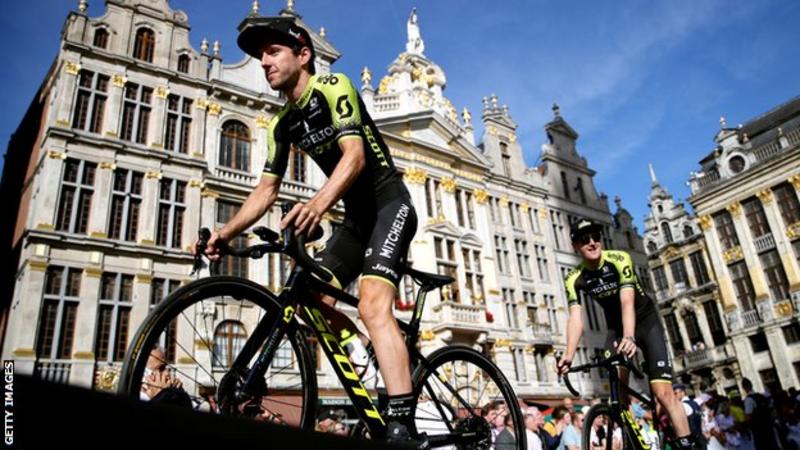 This year’s Tour de France, which begins on Saturday in Brussels, will be Adam Yates’ fourth.

The British rider’s best finish is fourth in 2016, when he won the white jersey as best young rider in the race.

The 26-year-old is leading the Mitchelton-Scott team at the 106th edition of the three-week race and he’s given BBC Sport his insight into each of the 21 stages.

This page will up updated throughout the Tour with the winner and brief report after each stage. 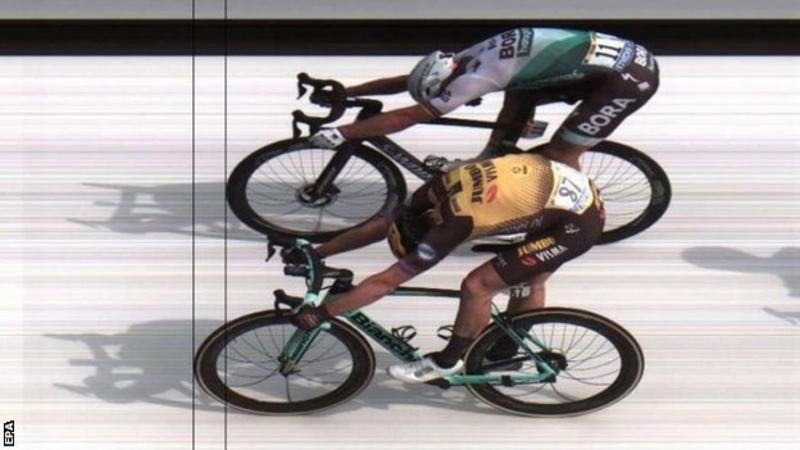 Defending champion Geraint Thomas says he is “unhurt” after being involved in a crash around 1.6km from the finish line. Pre-stage favourite Dylan Groenewegen goes down hard in the crash and his team-mate and lead-out man Michael Teunissen takes advantage of having a free role to pip three-time world champion Peter Sagan on the finish line. I don’t think you can go anything but full gas in a team time trial. We saw last year over a minute and a half separated the general classification contenders on the TTT – that’s a lot of ground to make up before you even get through the opening weekend.

I don’t see the margins being as big this year, mainly because it’s a little bit shorter and not as technical. We have a great team for this discipline at Mitchelton-Scott and expect to be among the best, and hopefully I can gain some time on a couple of my main GC rivals. 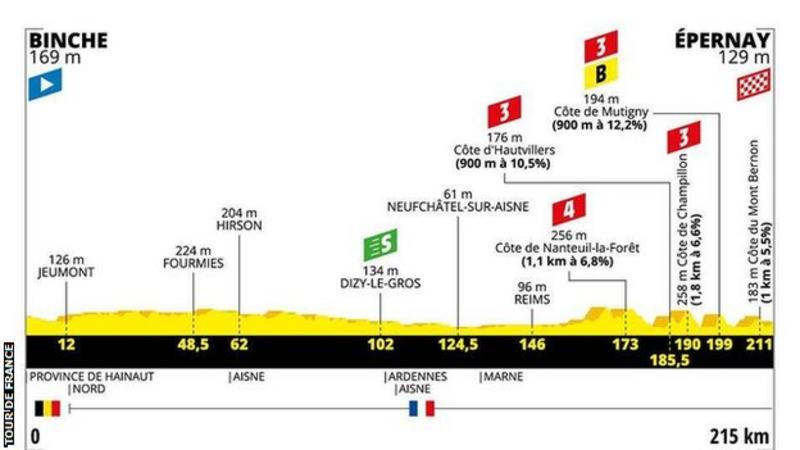 The first of quite a number of days over 200km on this year’s Tour. The climbs are towards the back end, but they are short and punchy.

It’ll bring a few extra names into the mix that perhaps wouldn’t fancy themselves on a pure sprint day, but I also wouldn’t discount the lighter sprinters either. Other than staying safe, I don’t think there’s a lot to gain for GC riders; there’s plenty of better opportunities for that coming up.

Rider to watch: Julien Alaphilippe – the Frenchman comes into the race as the number one ranked rider in the world. He’s a puncheur – a rider who revels in hills like these and has a decent kick. A second consecutive long day and probably another one for the sprinters. You might see someone trying to use the final climb to launch an attack, but there’s 15km still to race and a lot of still highly motivated and fresh sprint teams that I suspect would chase it down.

Rider to watch: Elia Viviani – the Italian is racing in only his second Tour de France but has won five stages at the Giro d’Italia and three at the Vuelta a Espana. 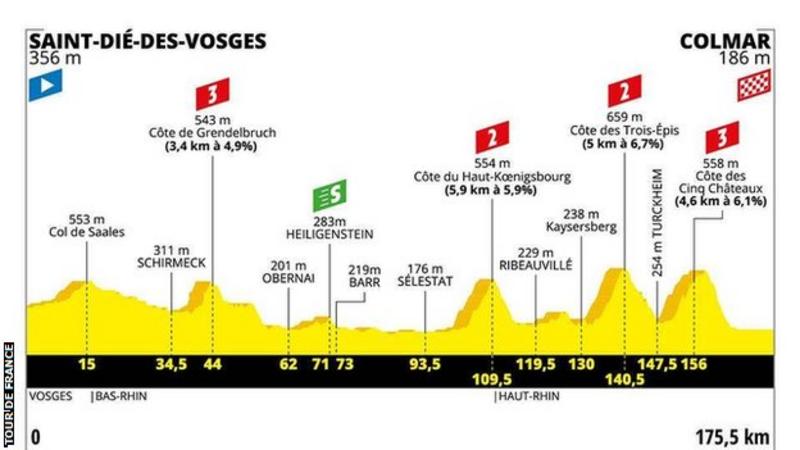 The parcours lends itself to a breakaway or, if the bunch is motivated, a reduced kick to the line. It’s hilly but I don’t suspect a day to separate the general classification riders in terms of form, but you have to be wary of positioning the whole day to minimise the risk of any bad luck.

There’ll still be a few teams with riders in contention to take the yellow jersey today before the GC players start to make a bigger impact.

Rider to watch: Peter Sagan – the three-time world champion has won the Tour’s green points jersey a record-equalling six times and he excels on these up and down days. The first mountain-top finish and the first real day for the GC riders to get involved. It’s always good to have a climbing hit out early on and it also starts to set up a more settled and ordered bunch for the days following.

Chris Froome famously won atop La Planche des Belles Filles in 2012 to put Bradley Wiggins into the yellow jersey and Wiggins went on to become the first Briton to win the race. I know this area well from when I raced for CC Etupes and lived in France. It’s a tricky day, but I won’t give too much away – we’ll see who has done their homework. But I will certainly be giving it a go.

Rider to watch: Adam Yates – I have to back myself because I love these sorts of days in the mountains. 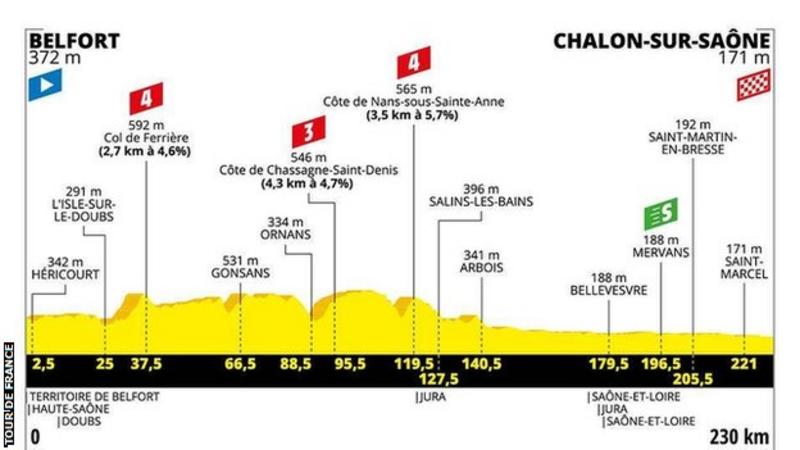 The longest day of the Tour. Even if it’s a GC team that holds the jersey on the start line, this early on in the race, there won’t be a lot of motivation for them to control for 230km, especially if there’s some big gaps from yesterday and those riders make it into the break.

If the sprint teams want another opportunity, they’ll have to do the work for it.

Rider to watch: Dylan Groenewegen – he won back-to-back stages on last year’s Tour and I reckon he could at least match that this year. Today is one of those leg-zapping days. It has a breakaway written all over it. There are no category one climbs, but we’re approaching 3,800 metres of climbing. It’s too hard for the sprint teams to control.

It’s a day that is suited to those hard, hilly one-day Classics specialists. For the GC game, it’s a day just to be attentive. But I would not be surprised to see the leader’s jersey change hands today.

Rider to watch: Greg van Avermaet – the 2016 Olympic and Tour de Yorkshire champion has won numerous one-day Classics, such as Paris-Roubaix, and took his his second Tour stage in 2017 after a long breakaway. 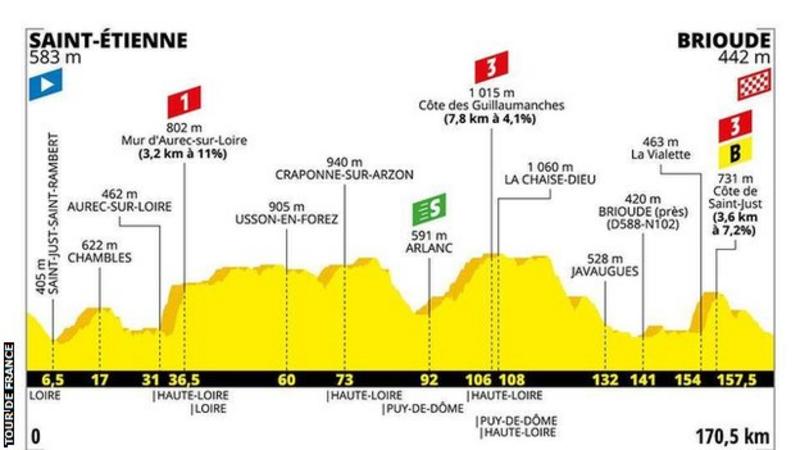 Another day for the opportunist break. With the first uncategorised climb and the following steep category one climb, Mur d’Aurec-sur-Loire, it really does lend itself to a strong breakaway getting up the road.

My objective will be to save as much energy as possible and it’s a great chance for my team-mates to look for a stage win.

Rider to watch: Matteo Trentin – my Mitchelton-Scott team-mate has won two Tour stages, the first of which came after he beat his fellow breakaway riders in the sprint for the line. 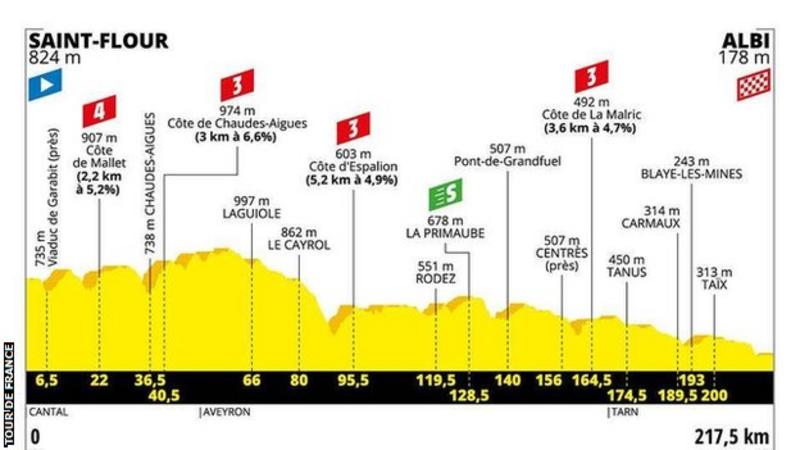 It’s Monday, isn’t today a rest day!? No! I think the playbook for today will depend on what has happened so far. There will be some motivated for the breakaway, no question, but will there be sprint teams still looking for a win?

It’s a lot nicer to get to the first rest day with some success, and if you don’t have a GC rider, that comes in the form of a stage win. So, for me, the break has little chance.

I like to keep things simple on the rest day. Lie in, easy spin in the morning, relax and massage in the afternoon. I will pencil in a time to talk with my head directeur sportif Matt White sometime in the day and go through some plans for the second week of racing.

We have a plan in place but a lot can change with 10 days of racing done already, which is why I’ll wait until this day to update you all with my thoughts on how I see the second half of the race developing.

It’s also a good opportunity to switch off as much as possible from the Tour circus, so after lunch I will just try to have some time alone or may just go and grab a coffee.

Adam’s guide to the final 10 stages will appear here on Tuesday’s rest day. 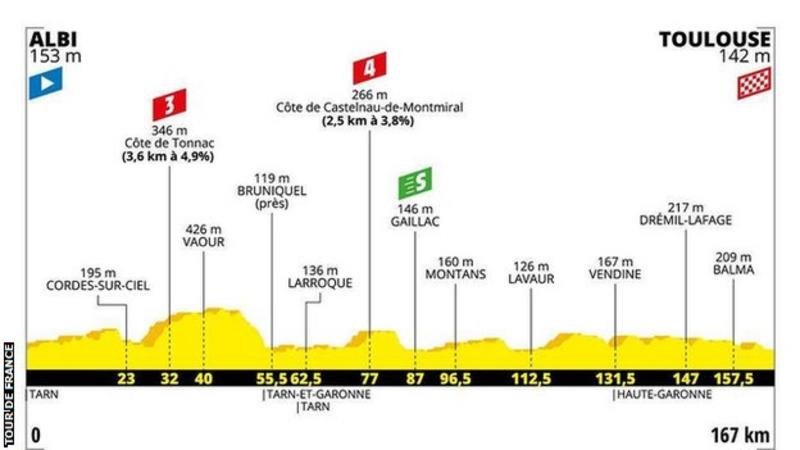 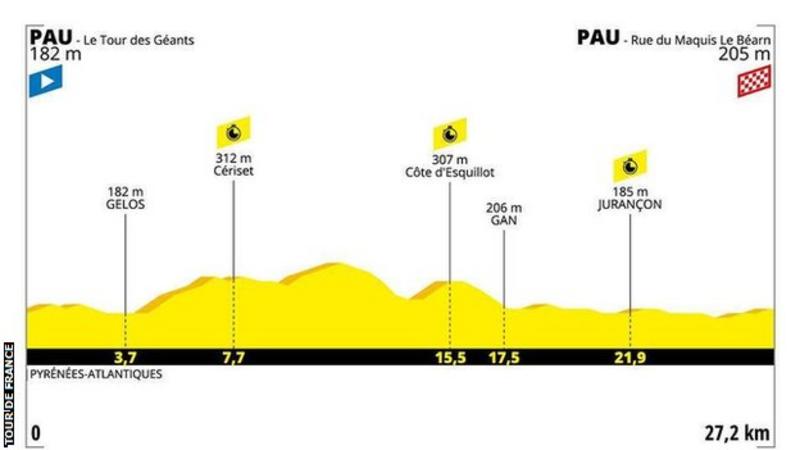 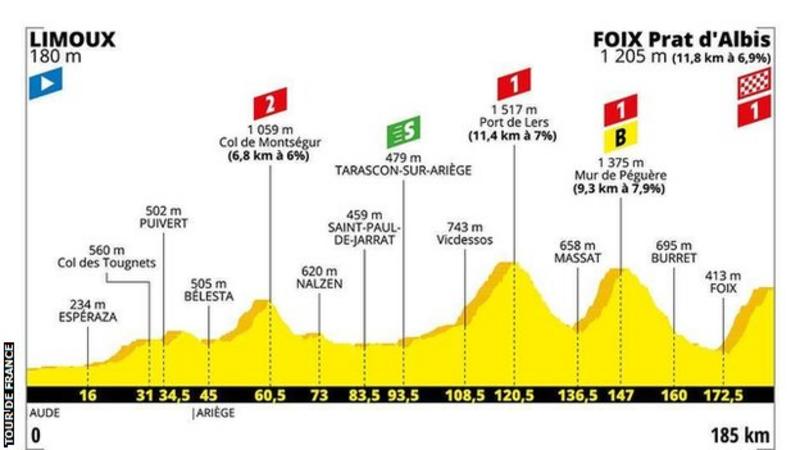 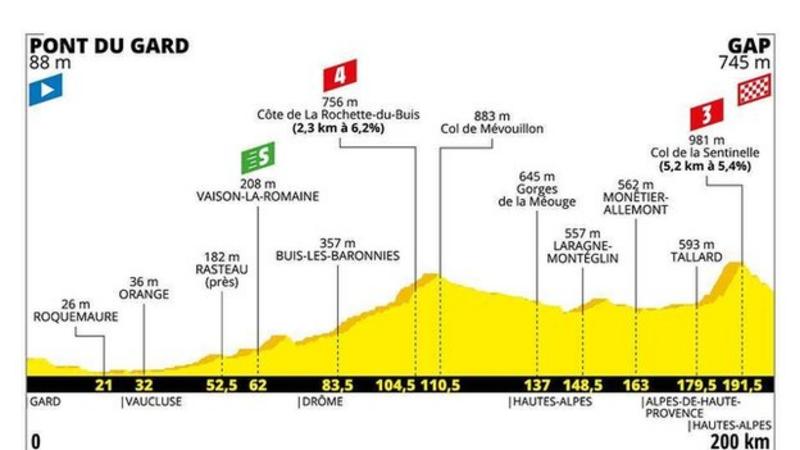 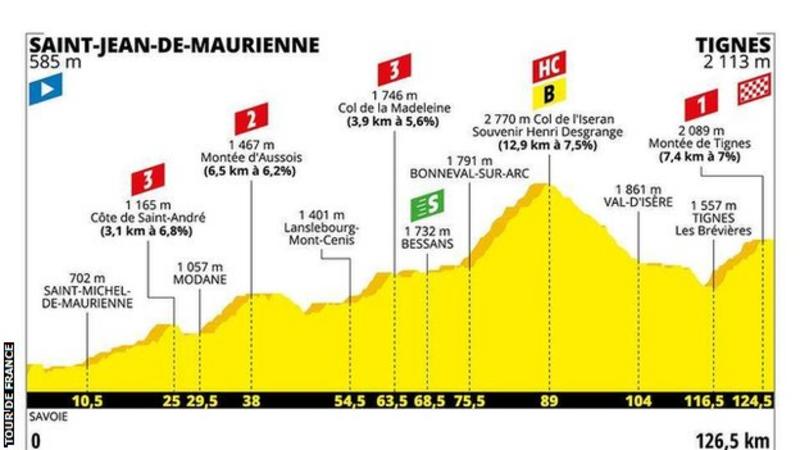 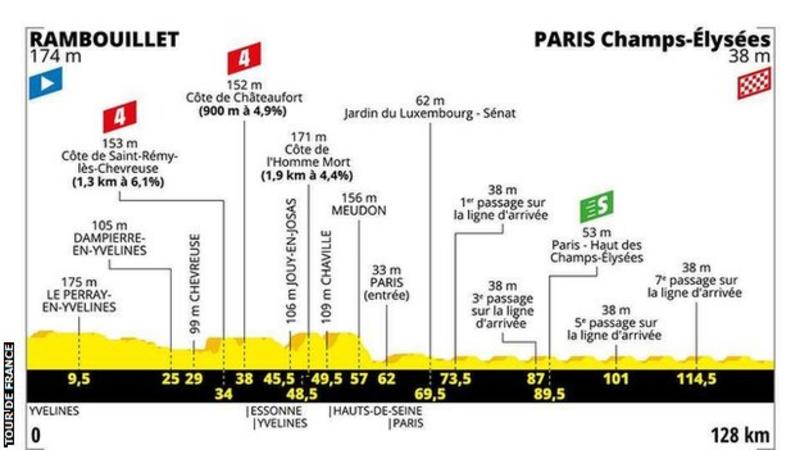