It’s late morning in Nimes and it’s already hot. So hot. The kind of heat that makes you skip from shady patch to shady patch, and the trees become your chaperone. On one side of Team Ineos’s hotel, a man hoses down a team car as another stands gloriously in the path of its deflected spray. On the other side, the directeur sportif Nico Portal is slumped on the floor of a truck, in discussion with a colleague who’s busy loading spare parts.

There’s a buzz around the place. It’s partly a literal buzz: the tress hum with insects and birds, and the huge flowering bushes seem to be vibrating. “It’s like a Queensland summer,” an Australian journalist can be overheard saying to camera. But mostly it’s an atmospheric buzz: officials and media weave in out of throngs of fans, who scurry around the entrance trying to catch a glimpse of the riders, who jump on their bikes and head off into the hills around Nimes – even on a rest day the legs need their daily fix.

It is the final week of the Tour de France before its finale in the Alps, and here two press conferences are taking place. The first is in a basement of Ineos’s hotel, in a banquet hall so large only one corner of the room is needed. Dave Brailsford is flanked by Geraint Thomas and Egan Bernal, and it is striking how different it feels to the same moment 12 months ago. Then it was Thomas sat next to Chris Froome in a sweltering press tent, when their relationship drew such scrutiny that Brailsford decided to let off a distracting explosion by saying French people had a “cultural problem”. It worked.

We’ll tell you what’s true. You can form your own view.

This time Brailsford strikes a much lower key, speaking so quietly even the bank of microphones under his nose can barely hear him. Right now Ineos are not the outstanding favourites of Sky in years gone by, but Brailsford insists he is enjoying the competition. “It’s way more exciting. It’s like chess. We’ve sat here many times and people have said ‘You’ve closed the race down, it’s not very exciting’. This is one of the most exciting for a long time. It has the suspense of not knowing what’s going to happen.”

Thomas seems relaxed, typically so. Where Chris Froome likes to be briefed on every detail of the schedule before a day like this one, Thomas is much more laidback and goes with the flow. Even so, he bristles slightly when it’s put to him that the team look weaker this year. “Egan [Bernal, his Ineos co-leader] is fifth, I’m second,” Thomas says. “I think we’re doing pretty well. We’re not in yellow and not on the front all day, but there’s more than one way to win a Tour.” 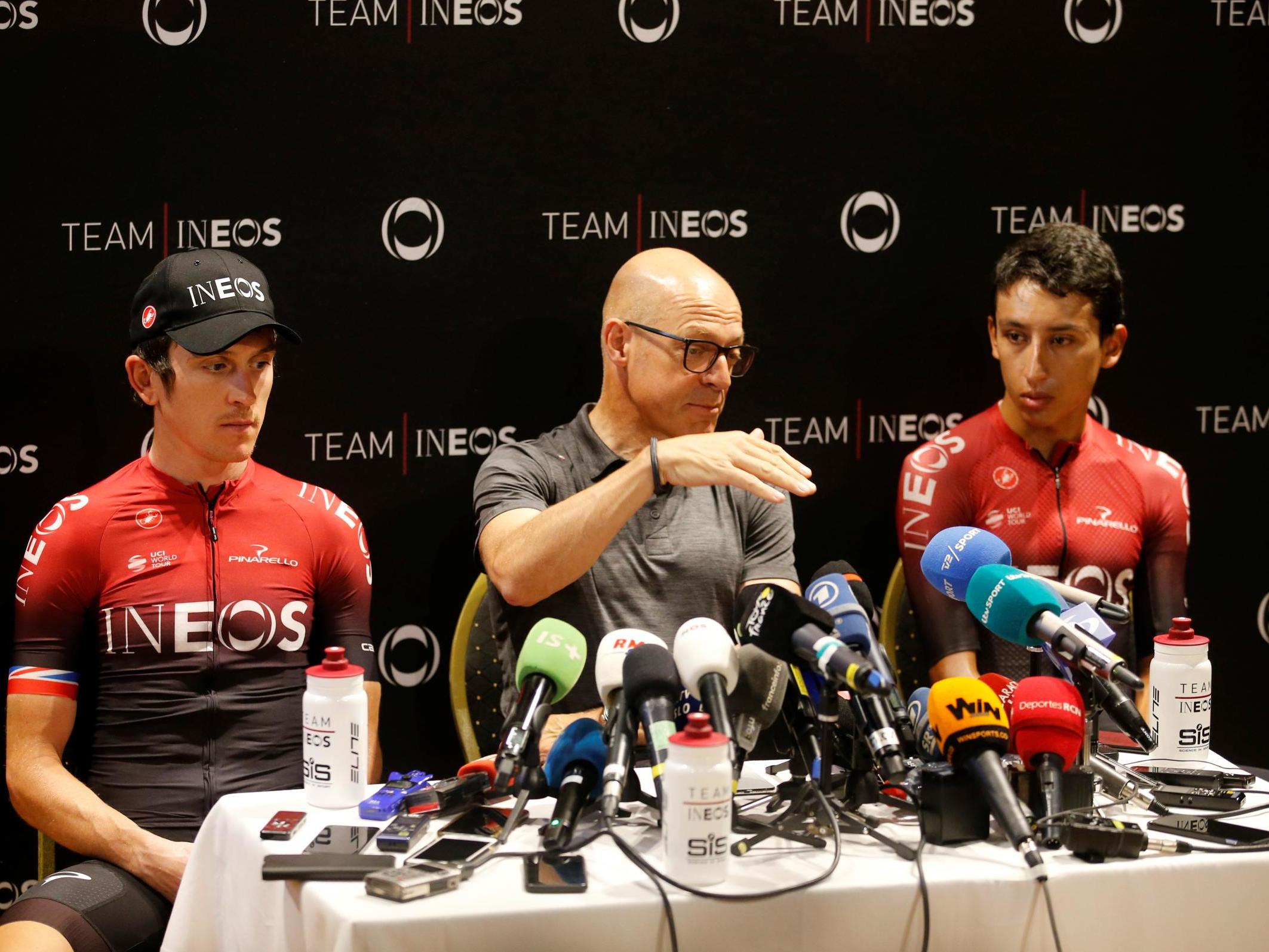 A year ago that hot tent was bursting at the seams with the world’s media, but it is a sign of both the absent Froome’s appeal and how this race is tilting away from Ineos that the real media scrum is happening somewhere else. Leave the building and walk along a narrow pathway cutting through the electrified shrubs, and you come out at the hotel of Deceuninck-Quickstep, where another hundred or so fans are getting photos and autographs.

Inside, a lift on the fourth floor pings open and out steps Julian Alaphilippe. “Bonjour, bon… Woah, c’est chaud!” he says, as he walks through a corridor of people and thick air into a small room overflowing with journalists. Everyone in France wants to hear from possibly its first winner of the Tour de France since Bernard Hinaut in 1985, and so does the rest of the world.

Alaphilippe is the world’s No1 ranked road racer, a one-day classics master and last year’s King of the Mountains here, but he has never contested an overall Grand Tour before. Can he win it? “I don’t know if it’s realistic,” he shrugs. “I don’t ask myself the questions. I just do like I did the last two weeks, day by day. I don’t know what will happen but for sure I will continue to defend the jersey. It gives me extra power.” 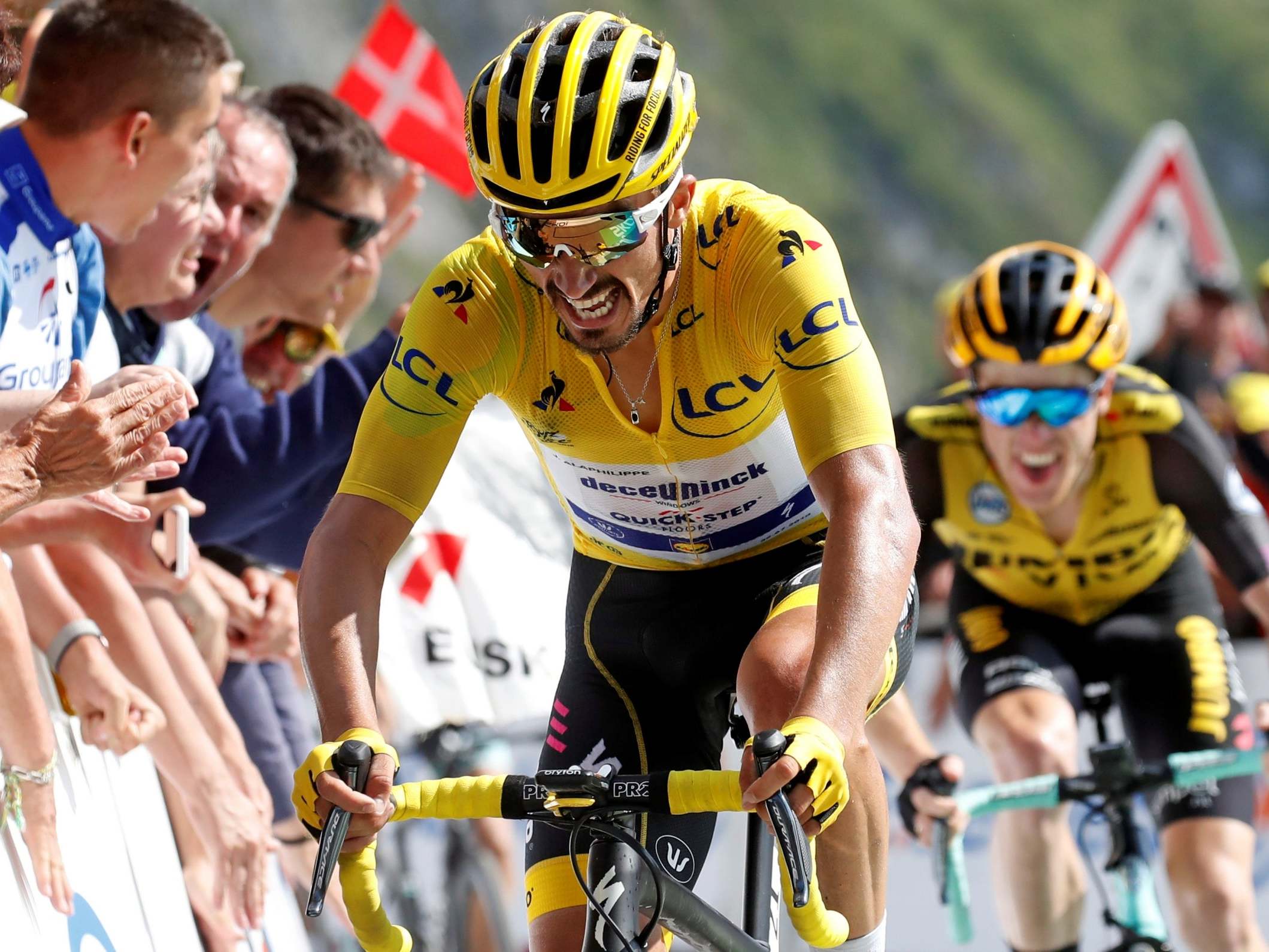 The beauty of this race is that no one knows anything anymore. Thomas might reject the idea Ineos could be weak but they are certainly not controlling the peloton or smothering the race into submission, and it seems wide open. There are still plenty of viable winners: Alaphilippe has a significant lead of 1min 26sec; Ineos have two cards to play in Thomas and Bernal; third-place Steven Kruijswijk has strong support in his Jumbo-Visma team-mates; third-place Emanuel Buchmann is an unknown quantity; and then there’s Thibaut Pinot.

Pinot was the strongest rider in the Pyrenees, winning on top of the great Tourmalet and picking off his rivals one by one on the road to Foix. He is fourth but he carries momentum into the Alps, and an expectant nation is beginning to switch its attention to the 29-year-old who was the best young rider here five years ago but has only fleetingly fulfilled his promise in the intervening years.

But then you remember the stifling heat – 37 degrees – and you realise there will be so many more cracks to come in the general classification over the coming days. Thomas knows it too, as the only contender who has already won the Tour de France, and he ends his press conference with a gentle warning for his rivals when asked whom he most fears. “Alaphilippe has a nice little lead. Pinot is obviously climbing really well. But the main thing about a Grand Tour is being strong and consistent all the way through it. It’s how you deal with any bad days you get as you go along.”