The Saints have retained their captain, coach and chief executive following a poor 2018, but it is nonetheless clear that their new president, Andrew Bassat, plans to chart a new, bolder direction in an attempt to invigorate a club that has been accused of becoming vanilla.

Burnt by the scandals of the early 2010s, Bassat's assessment was that the Saints had probably become a little conservative in their recruiting, and that they had to take risks with their choices to succeed. 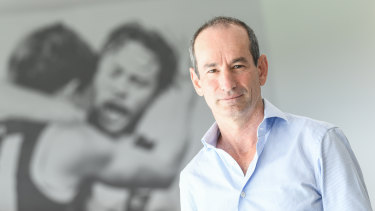 "Looking back – this is not the club view, this is my view – looking back that might have made us a bit gun shy, a bit more scared to take a risk and be whacked again,'' Bassat said, when asked about the recruiting. "Possibly, possibly that's a view internally.

"It's very hard to win a flag the safe way. So the fact that we need to take risks to achieve our goals is very accepted within the club now.''

St Kilda wanted to draft good citizens, with the result that they had few mavericks on their list, besides Maverick Weller (who's since gone to Richmond), and became a team – and club – that lacked players who could turn games and turnstiles.

Bassat, whose entrepreneurial acumen was evident in the co-creation (with his brother Paul) of multi-billion-dollar company SEEK, fondly recalled the litany of colourful players – the likes of "Joffa" Cunningham, Robbie Muir and Greg Burns – who been fixtures with the Saints in decades past.

"We don't think that's inconsistent with winning games of football. Allowing some of that back in probably makes some sense.''

The image-conscious and sponsor-challenged Saints also have sought to embrace diversity/inclusion agendas, or what the more conservative might view as political correctness. While the pride game against the Swans has won them plaudits, Bassat also recognised that the club would wear the accusation of being "distracted'' by community activism if they didn't win games.

"Again, we can walk and chew gum at the same time. We think can have the pride game and that's not going to be an excuse for us not winning games.''

Bassat's overriding point was that every step the Saints take would be judged on a simple question: Does it help them to win games?

"Football is absolutely the first priority… [every] decision we make is through the lens of will this help us be successful on the field? Will this help us win our next flag? If the answer's no, it's either de-prioritised, or not done.''

Bassat strongly backed chief executive Matt Finnis, calling him "a great CEO'' whose work on the return to Moorabbin and rebuild of a "very poor'' culture had established a platform to shift the focus to winning games.

Bassat also flew the flag for the senior coach, Alan Richardson, though his support was more qualified, in comments that reflected the reality that the coach couldn't be guaranteed anything beyond this year. "Richo'' would coach for the duration of 2019, Bassat said, and the president hoped he would remain at the club thereafter.

But the Saints had to show improvement and "week-in, week out'' competitiveness under Richardson, now surrounded by experienced operators in Brett Ratten and Brendon Lade, with Graeme "Gubby" Allan acting as a sounding board across the football department. Finals were not expected, nor ruled out this year.

St Kilda have been close to the AFL hierachy over the past few years, with both Finnis and football boss Simon Lethlean having strong relationships with Gillon McLachlan and the club relying heavily on headquarters to stay solvent in the face of hefty $12 million debt. Bassat, whose brother Paul is an AFL commissioner, acknowledged that McLachlan and his team wanted to see progress faster.

"They're perhaps a bit impatient, they would like to see us paying off the debt more quickly, and being more competitive more quickly.''

Intriguingly, Bassat drew a comparison between St Kilda and his company, SEEK, which had gone toe to toe with Google and Microsoft and still succeeded. He saw no reason why the Saints couldn't do the same versus Collingwood, Hawthorn et al.

"It's possible to turn yourself into a bigger club. Geelong's done it.''

Bassat added, though, that the specifics of Geelong's stadium deal meant they couldn't be the role model.

"We can own the entire bayside area, all the way through to the Mornington Peninsula, which is a massive area,'' said Bassat, singing the same tune as past regimes.

In the Grant Thomas-Ross Lyon era, the Saints won plenty of games, but failed to convert those regular finals appearances into a sustainably strong club. This time, the whole St Kilda off-field project hinges on winning.

"It will be hard for us to take the steps we need until we're better on the field,'' said Bassat.

Leaving the Seaford disaster for the hallowed ground of Moorabbin was critical. But if he didn't say it, the impression Bassat gave was that Saints would not be a destination club until they looked like going places.