When Tony Clark turned 30 years old, he was coming off an All-Star season and earning $5 million, the highest salary of his 15-year major league career. Two years later, in 2004, he was a part-time player for the Yankees whose salary had been cut by 85 percent.

Clark considered his ordeal as he stood in the on-deck circle at Yankee Stadium in the bottom of the ninth inning in Game 6 of the American League Championship Series against the Boston Red Sox. If he could only get to the plate, Clark was sure he would make up for all of his frustrations by doing what he did best: obliterating a baseball. Ruben Sierra walked, giving Clark a chance to win the pennant with a home run.

Clark, now 47, never made it to the World Series. But he ascended to become the head of the union in December 2013, and led its last collective bargaining agreement with the owners.

That deal has turned into a rout of a different kind — though this was more of a curveball than a belt-high fastball. With little warning, data-savvy executives across the game have turned free agency from a reliable spigot of cash into an annual freeze. Discontented players have spoken up about issues with the entire system, from a lack of competition among teams to the quality of the product on the field.

There has not been a strike in baseball in 25 years. But two off-seasons of building tension has led the union and owners to the unprecedented step of a midterm renegotiation of their C.B.A. this summer — more than two years before it expires. And Clark is not seeking minor adjustments: He maintains that the system is broken.

In extending Clark’s contract in November, the players have given him another at-bat. Now is his chance to correct whatever mistakes he and the union made in negotiating the current contract in 2016.

“He’s angry, like we all are,” Whit Merrifield of the Kansas City Royals said. “He’s angry at the way things have been handled — and that’s what you want.”

Clark’s future calling took hold in the minor leagues in 1992. On a road trip in the New York-Penn League, he visited the Hall of Fame in Cooperstown, N.Y., and spent much of his time learning about the Negro leagues. The experience instilled in him a sense of responsibility.

“This wasn’t just about me,” Clark said. “This was about those who came before me and those that are coming after me.”

In 1994, when Clark was still in the minors, a strike by M.L.B. players led to the cancellation of the World Series. Determined to implement a salary cap, the owners tried to break the union by using replacement players at spring training in 1995.

Clark learned to be suspicious of ownership. As the American League’s player representative later in his career, he forged a close bond with Michael Weiner, who became head of the union in 2009, the year Clark retired. Weiner lured Clark from a television analyst job to become director of player relations.

Clark did not know that Weiner would groom him to be his successor. After Weiner learned he had brain cancer in 2012, Clark refused to attend a meeting of the union’s senior staff to discuss a succession plan. He would not consider any scenario involving his mentor’s absence.

“My plan of being in Michael’s hip pocket changed very quickly with his ailment and then subsequent passing,” said Clark, whose eyes welled up while talking about Weiner, who died in 2013, at 51. “My goal was not to be in this corner office.” 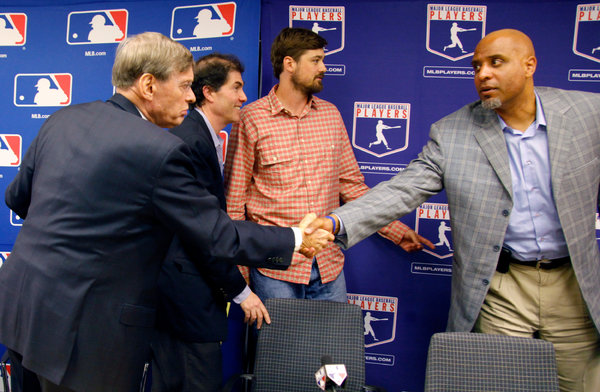 Clark became interim executive director in 2013 and was voted to stay on, becoming the first former player to hold the job in the modern players’ union. But replacing Weiner, a Harvard-educated lawyer who had been a domineering and beloved figure in his 25 years at the union, was daunting. Clark spent 2014 learning the union’s inner workings and the next year preparing for negotiations with M.L.B.

The C.B.A. signed in 2016 drew few criticisms initially, but soon an uneasy consensus emerged: It had allowed the owners to tilt the balance in their favor. The fundamental aspects of the system were in place before Clark took over. But some changes, such as harder caps on international spending and stricter penalties for higher payrolls, were clear wins for owners.

“We were under the assumption that we weren’t giving up that much,” Mets outfielder Michael Conforto said. “We didn’t realize that there were ways around the things that we put in to protect ourselves.”

Some players have said the union might not have properly anticipated what was to come. While Clark rejects the notion that the union was more concerned about quality-of-life issues, such as travel and clubhouse food, than the larger issues in the system, he admitted he was not prepared for the rapid changes in the labor landscape.

“I didn’t see this. Didn’t see these changes,” Clark said, noting the agreement “didn’t move very much.” He added, “Even others have acknowledged that the changes have been vast and quick from the standpoint of all 30 clubs.”

As his second chance approaches, Clark has taken measures to galvanize players and strengthen relationships with agents. The union has built a formal analytics department, introduced a smartphone app for players and overhauled its communications staff. Bruce Meyer, an experienced lawyer who worked closely with the former union chief, Donald Fehr, at the N.H.L., was hired to be the chief negotiator. Clark estimated that the union had undergone more staff changes in the past few years than at any point in its previous five decades.

Clark has spent much of the last year meeting with and talking to agents and players around the country. He conducted several spring training meetings, holding them outside of the clubhouses to minimize the risk of spying by management.

“I didn’t do a good enough job preparing players in ’16 for any eventuality,” Clark said, referring to a range of options that include, yes, going on strike.

A sense of complacency

While some players and agents have privately criticized the union and Clark, many instead blamed themselves, pointing to widespread complacency ahead of the last C.B.A. negotiations.

In December the union’s executive board, which includes player representatives, unanimously voted to extend Clark’s contract through 2022.

“The fact that we brought Tony back to be our leader shows that we all have confidence in him, what the plan is and how they’re moving things forward,” said Yankees starting pitcher James Paxton, who serves on a high-ranking union committee.

In the years leading up to 2016, that momentum was hard to find. David Price of the Boston Red Sox said that a decade ago, nearly every player from a 25-man roster would show up at the union’s in-season meetings. In time, he estimated, it had dwindled to about one-third.

“We’re in a world of 280-character answers,” Merrifield added. “We want to learn about things surface level. That’s how I feel like guys were two years ago. They wanted a short and brief ‘How we doing? How we going to do this?’ That’s what they got. They weren’t educated on what exactly was happening.”

The system that was upheld still works for many players, of course: Manny Machado and Bryce Harper landed a combined $630 million in free agency this off-season. But with a few exceptions, the landscape is now painfully obvious: The system stifles the earning power of the younger players teams covet, without the promise of later rewards.

“This is a fundamental fairness issue where how it’s always worked is no longer working,” Clark said, adding later, “The players understand and appreciate that the goal posts have been moved and the dynamic now is different.”

The precarious course ahead

Finding a suitable balance, of course, is essential to any negotiation. When one side feels a sharp imbalance, as the players do now, fundamental change becomes extremely challenging.

Commissioner Rob Manfred has seemed open to the idea of reform, motivated by his desire to change pace-of-play rules. Yet Manfred has found the union slow to respond to his overtures.

“We invited during spring training of 2018 — and I did not misspeak just there — Tony to get in a room with us, tell us what his concerns were about whatever issue he had, and try to deal with those concerns,” Manfred said at the owners’ meetings in June. “I’m encouraged that he’s ready to do that. We made a deal in 2016 and we’re prepared to live with that deal. By the same token, we’re prepared to listen to his concerns.”

Executives are right to place a higher value on younger players than they do on veterans. Manfred, Clark and their top negotiating lieutenants — Dan Halem, the M.L.B. deputy commissioner for baseball administration and chief legal officer, and Meyer — could conceivably find ways to redirect more money to younger players.

The thornier disagreement concerns the overall competitiveness of teams. Many players feel owners are content with fielding low-payroll teams and losing because they still make money through streams like revenue sharing and broadcast rights. A record eight teams lost at least 95 games last season; not surprisingly, perhaps, attendance is down this season for 17 of the league’s 30 teams.

“We believe we have a system that is being used now to suggest that teams either go all-in or go all-out, that there’s no middle ground anymore,” Clark said. “That middle ground will need to be addressed in any number of ways at the bargaining table.”

Manfred countered that there have “always been cycles in baseball of rebuilding,” pointing to the standings as proof of competitive balance. On Sunday morning, 21 of 30 teams stood within five and a half games of a wild-card spot.

Owners do not want players dictating how they should run their teams, but the union believes that the league has embraced groupthink — it is careful not to use the word “collusion” — in a way that depresses players’ earning power.

“You can’t fault an owner or a G.M. for wanting to maximize profit and at the same time be competitive,” said pitcher Charlie Morton of the Tampa Bay Rays, who are contending despite the majors’ lowest payroll. “I guess what we’re going to have to push for is maximizing salaries for younger guys that are performing and giving value to teams — and competition.”

For many months to come, the competition in the bargaining room could be just as intense as the play on the field. Clark wants the union to be prepared for the years of potentially contentious negotiating ahead. The players are getting the message.

“It’s going to be a pretty cordial beginning to it, but as the off-season goes on, it’s going to get pretty hot,” Conforto said. “Tony has tried to prepare us. He says, ‘Save your money, make sure that you’re not spreading yourself too thin so you can weather the storm.’

“We all have to help each other out with that. If worse comes to worst and we have to stop — if we get locked out or we strike — just be prepared for it. Everyone needs to have that in the back of their minds: Be prepared and make sure we’re all together.”

Tyler Kepner has been national baseball writer since 2010. He joined The Times in 2000 and covered the Mets for two seasons, then covered the Yankees from 2002 to 2009. @TylerKepner

James Wagner has covered baseball — the Mets for two and a half years and now the Yankees — for The New York Times since June 2016. Previously he worked at The Washington Post for six years, including four covering the Nationals. @ByJamesWagner • Facebook